Kiev stands on the hills of Dnipro river right shore. The hills for city development – is not very good. If ground will be oversaturated by water landslides begin to occur. If water accumulates between two layers of clay, then huge mass of mud can rush down destroying everything on a way. To prevent this, in the beginning of XIX century actions were applied by engineers to protect the slopes. In fact,  slopes  can be protected in two ways:

The first is to build retaining walls that will hold slopes, the second is more complicated but more effective. It is a question of building in the depths of Kiev hills a ramified network of tunnels that will collect water from aquifers and through the tunnels it will be gravity-fed to Dnieper river.

Kiev Urban Explorers have explored more than 53 kilometers of drainage tunnel systems under Kiev at the moment. Main quantity of this tunnel systems are concentrated deep in the steep slopes above the right Dnieper shore, but there are also tunnels in Kurenivka and Amurskaya Square neighborhoods. Even under “Ukraine” hotel which stands above Maidan Square exist drainage tunnel system which has been built in two tiers.

The drainage tunnel is to some extent an active model of natural cave. Water which passing through thickness of ground dissolves minerals which stay on the tunnel walls and ceiling and forming stalactites, streaks and stalagmites. 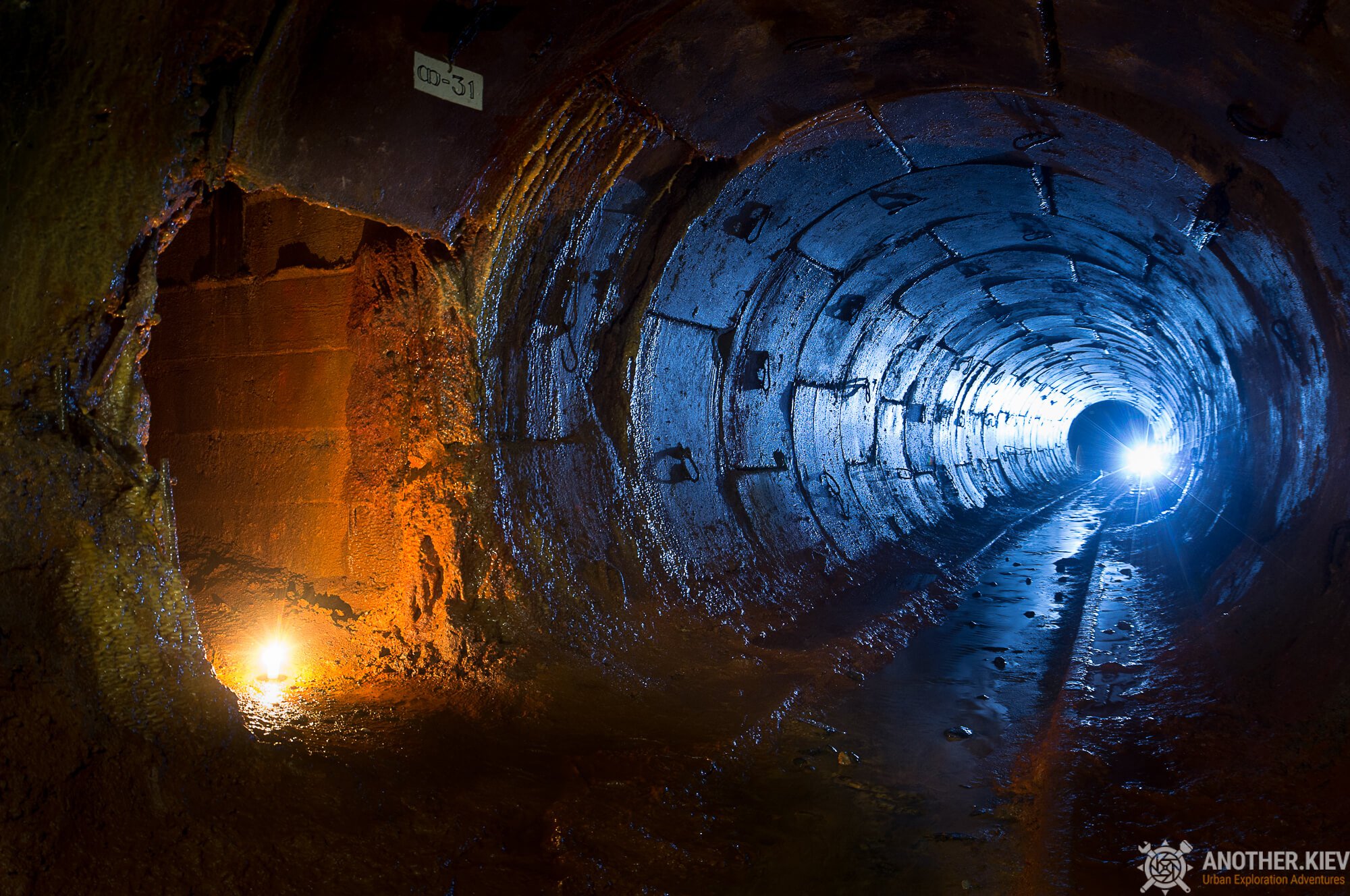 As in the natural caves, bats live in the drainage tunnels. They are sleeping in hidden places during the winter. When hot weather come back to Kiev they fly out through the holes in ventilation shafts in search for food. 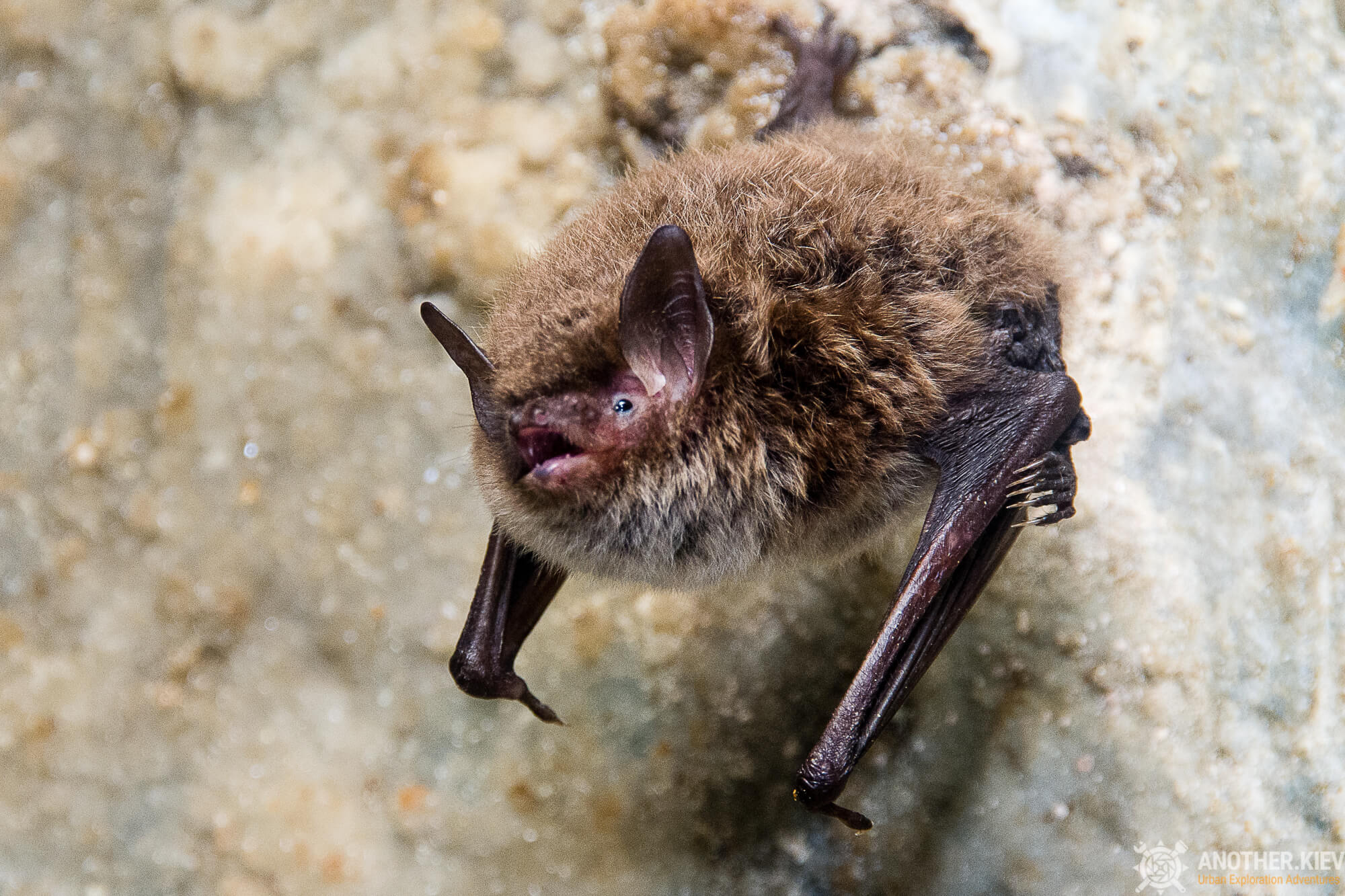 Part of drainage tunnels were built in the middle of the XIX – early XX century and are under historical interest. The first drainage tunnels were built by the Russian Empire engineers in the depths of slope near entrance to Kievo-Pecherska Lavra monastery.  This one of the first system of tunnels was named by the local urbexers “Nikolskaya” – because development was completed during the reign of king Nikolay II in 1916. System of old tunnels in some places interbreed with modern galleries. Most notable place of this dungeon is “Royal Well” – largest underground waterfall in Kiev, falling from a 22 meters height.

A few more interesting Kyiv places to visit with us.

the most high tunnel in drainage system “Nikolskaya”. The name to this tunnel was given because cascade arch ceiling. Tour to dungeons of Kyiv as the best way to have a good time!

Someone from the Kiev urban explorers left in this hall a toy rabbit that serves as a mascot of tunnel system.

If you will climb up to the top of “Kings Well”, you can get into the longest drainade tunnel system in Kiev.  “Askoldova” – got its name, because it has several entrances near by Askold’s tomb memorial neibourhood. Total total length of tunnels this labyrinth reach 5 kilometers. Tunnels of this system collect ground water from the hills extend from Kiev-Pechersk Lavra to the Green Theater.

This shaft was built under one of Kiev hills. You can go to explore these labyrinths inside the Kiev hills with experienced urbex guide from ANOTHER.KIEV crew. Contact us from Drain Tunnel tour booking page.

Unlike the underground rivers of Kiev, which tours are seasonal in nature, the drainage tunnel systems can be visited all year round.