Menu
We hid the car in the courtyard of one of the still abandoned houses in Namiya.Formally, this area has already been cleaned and now it is a green zone, but not many people will dare to return to their homes, because they afraid of radiation. The streets of the half-abandoned city were lit by the arriving moon, we cheerfully walked to the barrier, which blocking the road into the red zone, among overgrowned with the bushes street. After just two hundred meters I saw the light of the approaching headlights in the spherical road mirror on the corner and jumped into the bushes of roses. A patrol car passed by slowly. The bushes turned out to be roses and after getting out of them we continued our way constantly turning around. For almost a decade and a half of visiting abandoned objects all over the world, I saw everything, however we were entering an absolutely untouched, neglected world. We were walking in the silence, through the abandoned railway tunnels, we invaded the red zone of the Fukushima-1 nuclear power plant from the north. This warm night in its unpredictability of a new adventure brought me back to my the most, perhaps, impressive illegal trip to the Chernobyl exclusion zone. It wouldn’t be so exciting and pristine anymore. 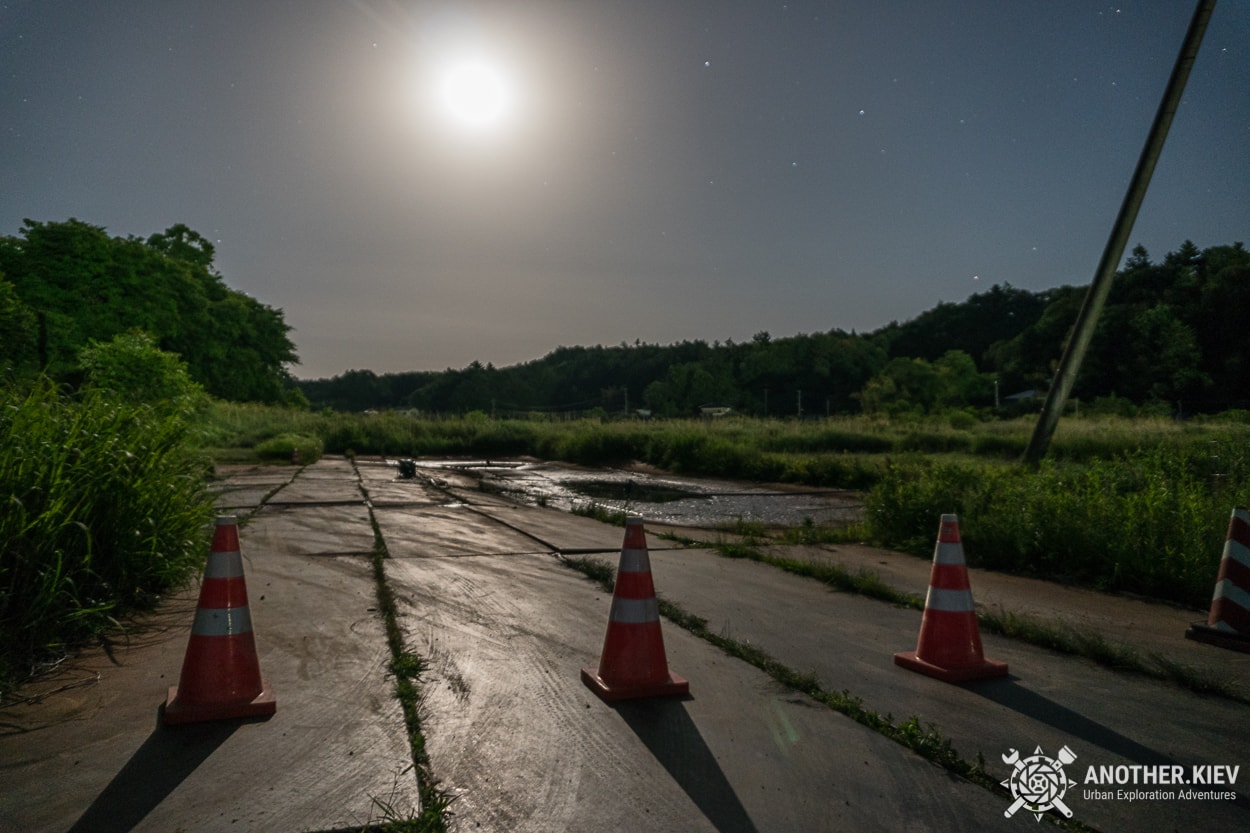 March 11, 2011 as a result of the strongest in the history of Japan earthquake and the tsunami, that followed it, there was an accident at the Fukushima-1 nuclear power plant. The force of nature disabled external funds of power supply and backup diesel generator, that’s why cooling system of several units of the power plant went off-line, and as a result, active areas of reactors number 1,2 and 3 melted. The consequences of the disaster were truly horrifying. Urbex Photo Tour in Kyiv for every person with no restrictions on physical condition level! Almost immediately after the accident evacuation of people from nearby settlements began – firstly from a three-kilometer zone, then from a zone of 5-15 kilometers, and then the exclusion zone became a circle with a radius of 30 kilometers. Generally, about 160 thousand people were evacuated. In the exclusion zone, there are six cities and several villages, which are heavily polluted with radiation. Futaba is one of the two largest villages in the exclusion zone of Fukushima. It was about 2:00 a.m. when we entered the city. In many places street lights were shining and under them there were dome CCTV cameras. After exploration Ghost-town Okuma last night we were really careful. 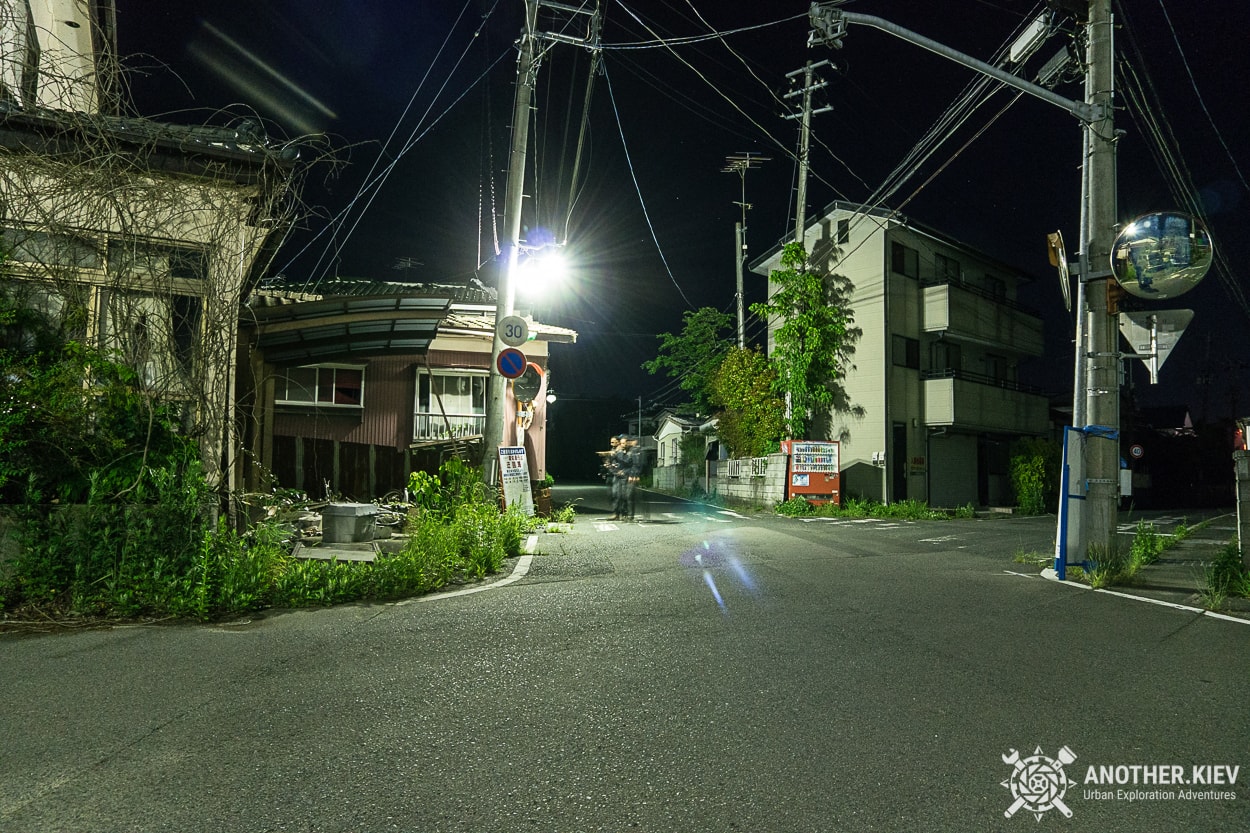 Sneaking through the open window at the second floor, I opened the door for the other and we penetrated into the abandoned store. 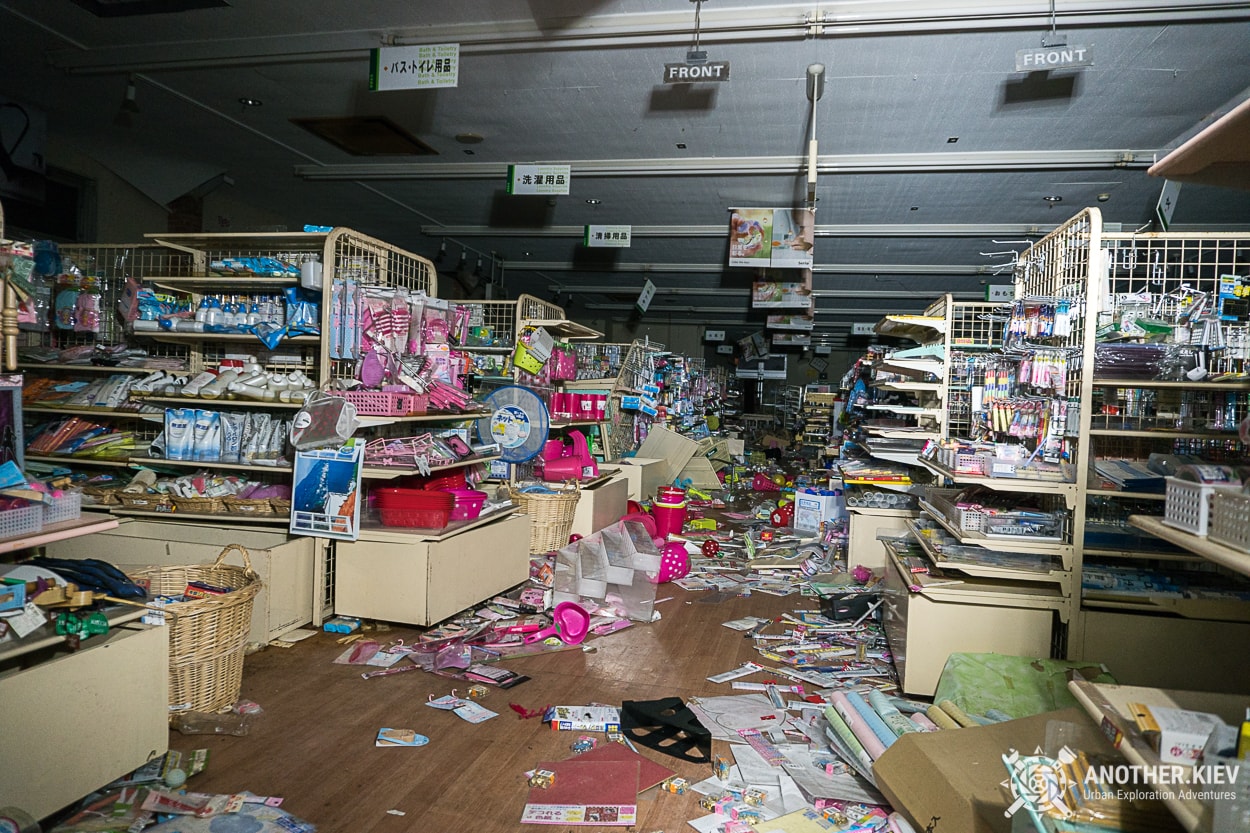 We took a lot photos, went outside and strumbled across other people. I don’t fully understand who it was, but I did not want to check it. We saw them, they us, we quickly escaped and waited for the time to continue walking along the streets of the abandoned city. From time to time I looked at the dosimeter, its readings didn’t exceed 400 microroentgen per hour. 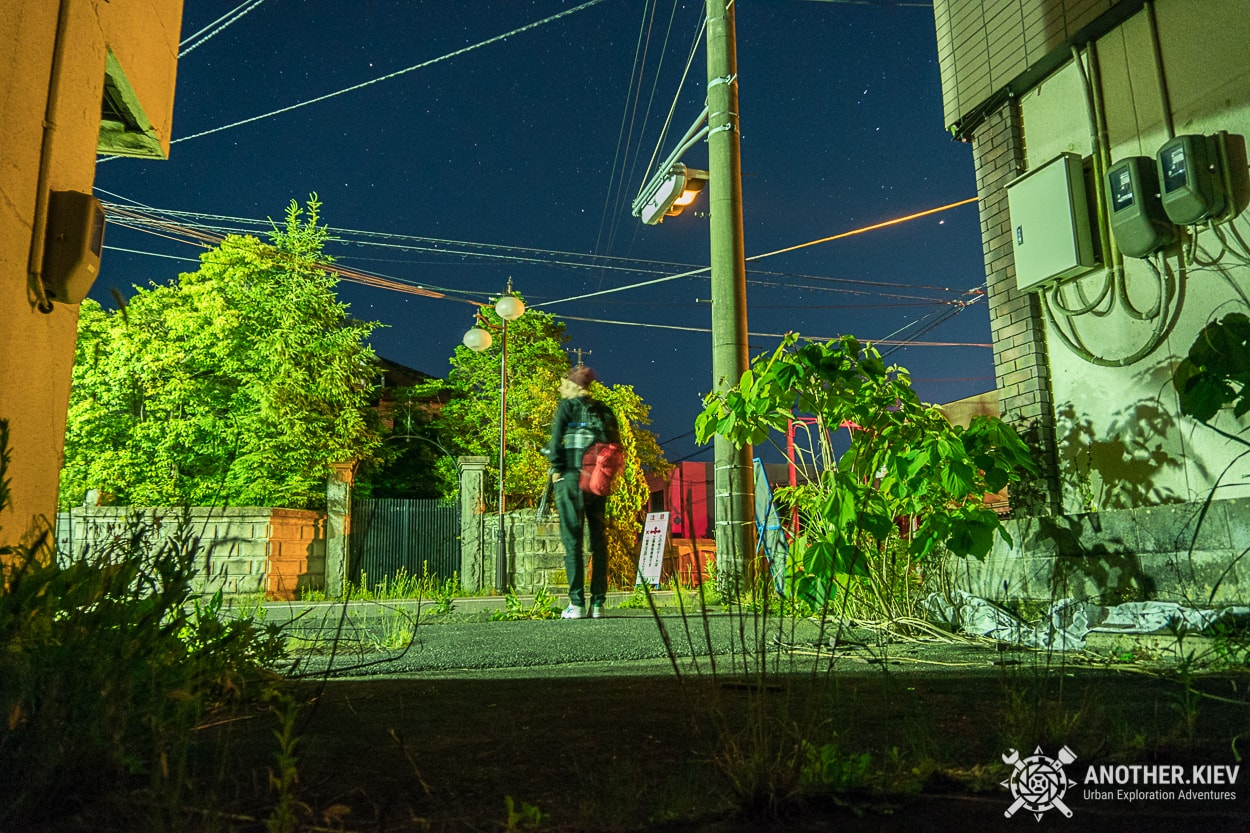 Closer to the morning we went to a huge sports complex. 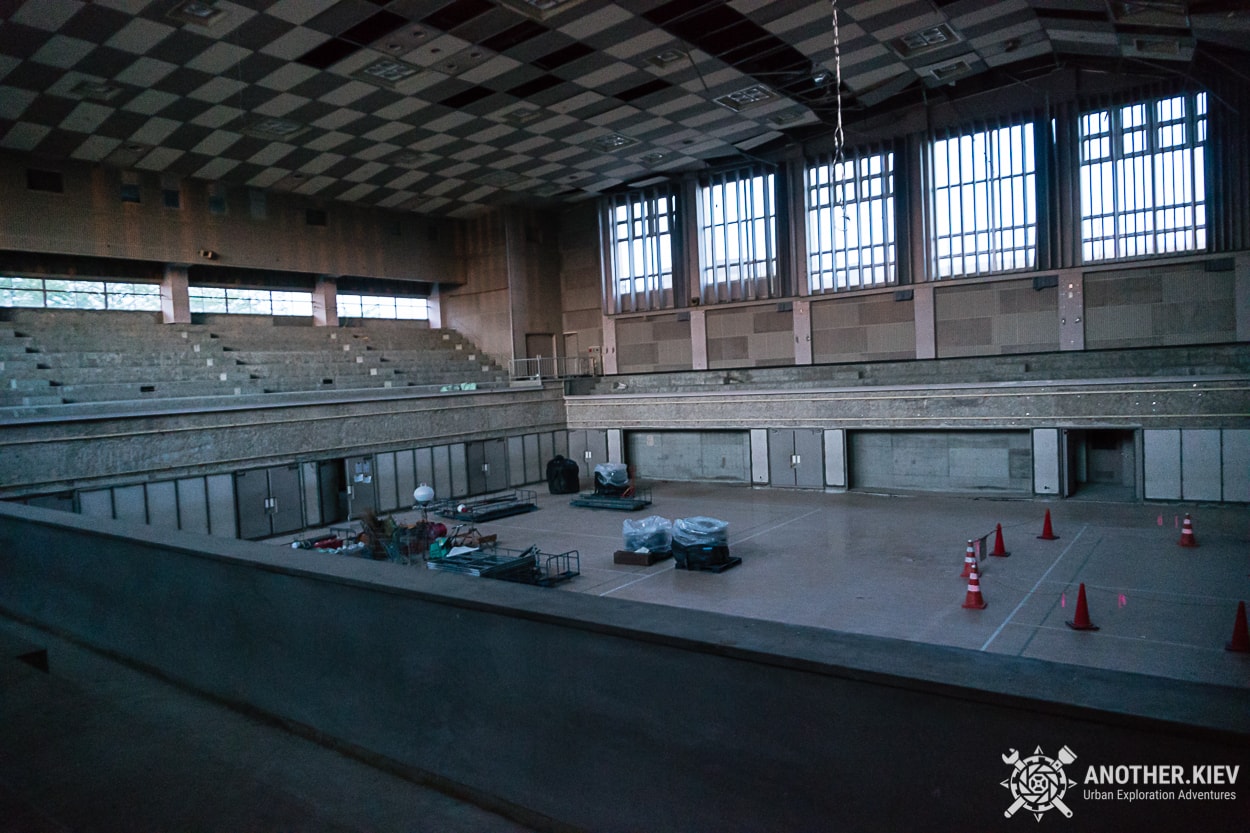 After dawn, we went for a walk, so it is how looks a blocked street. In a few hours there will be a police outfit. 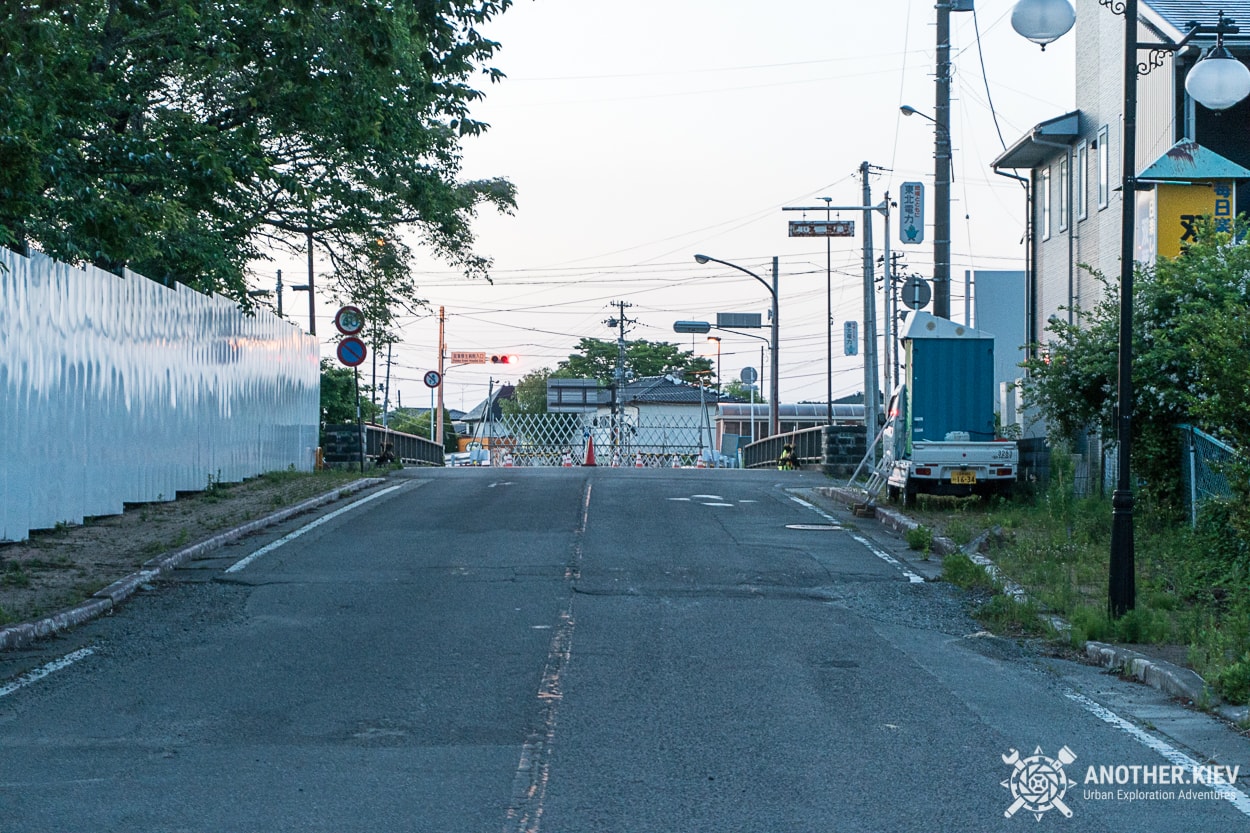 One of the distinctive features of Japan – these are machines for selling anything. In the village there may not be a store, but the vending machines for the saling soft drinks will be there. 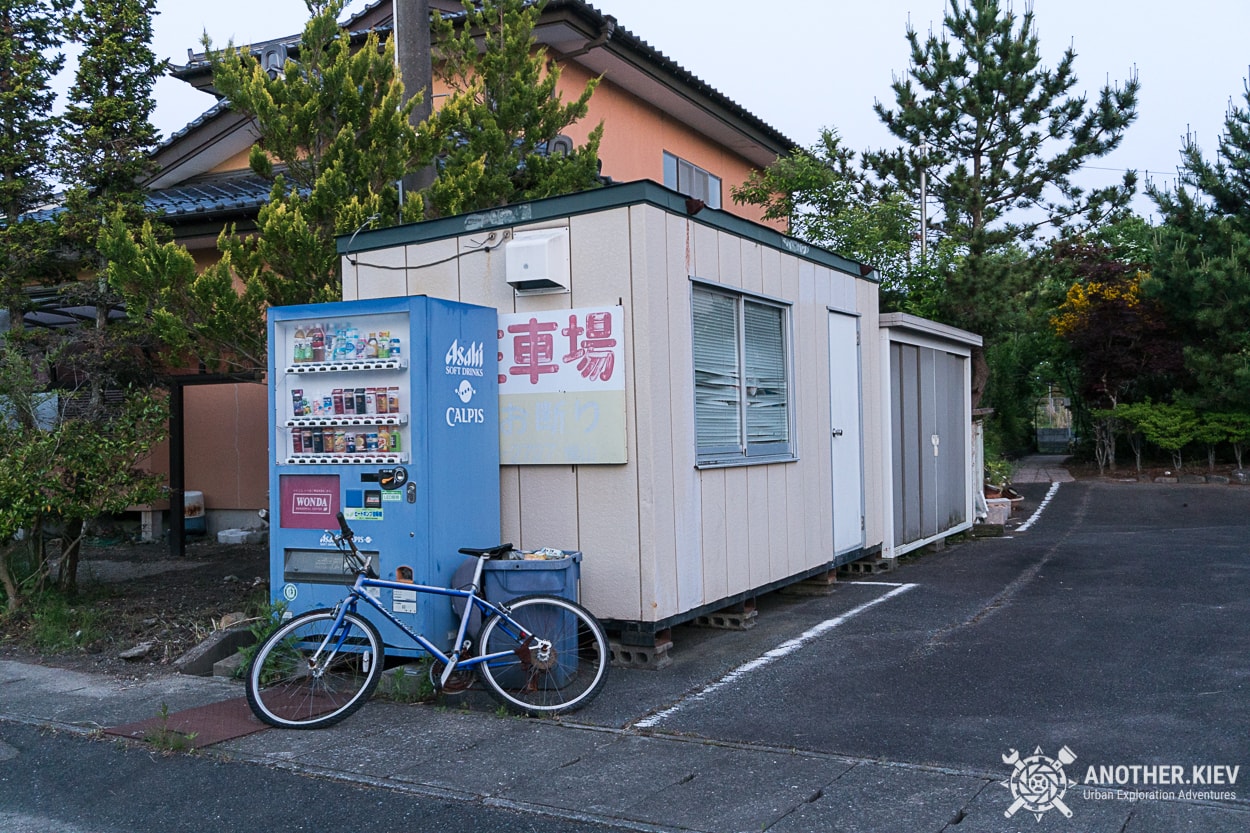 Soon the trees will sprout through the cars. 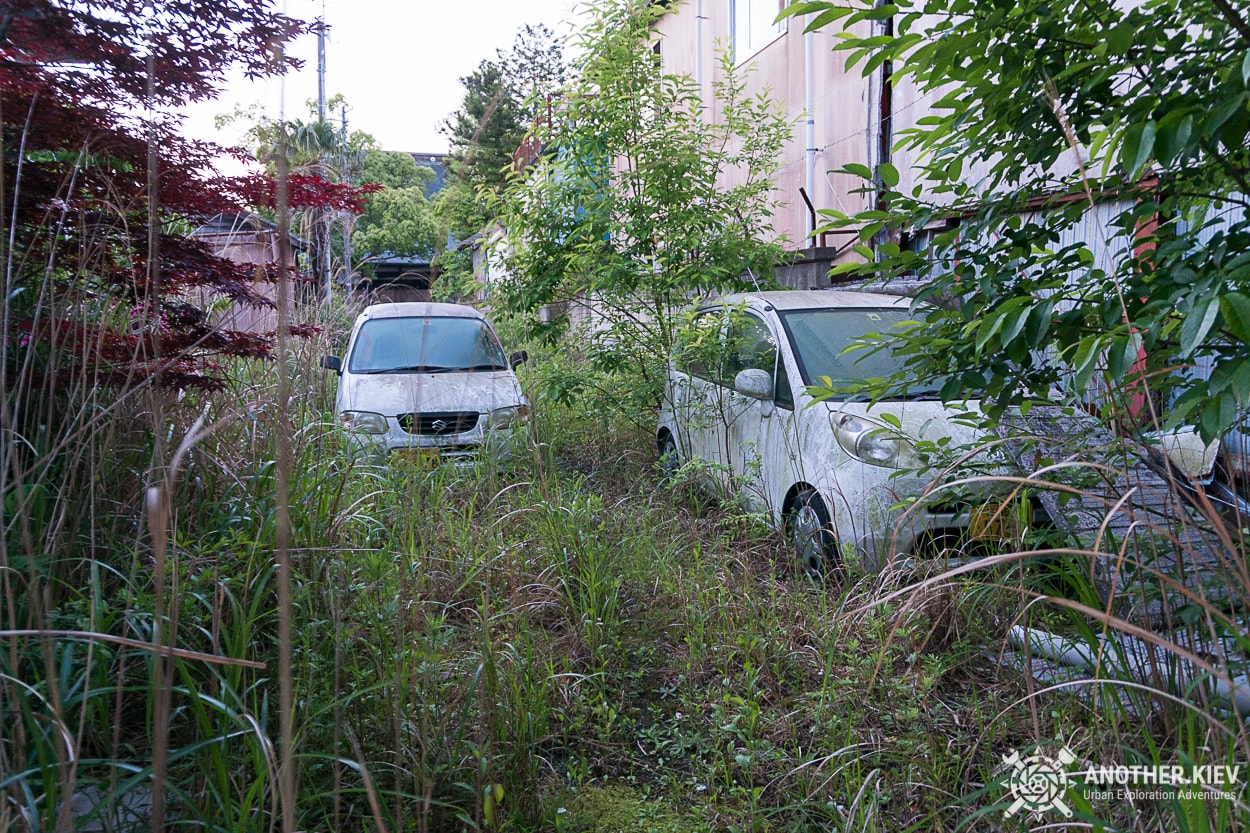 We decided to move to the outskirts of the city to climb the hill and take a look at the panorama. 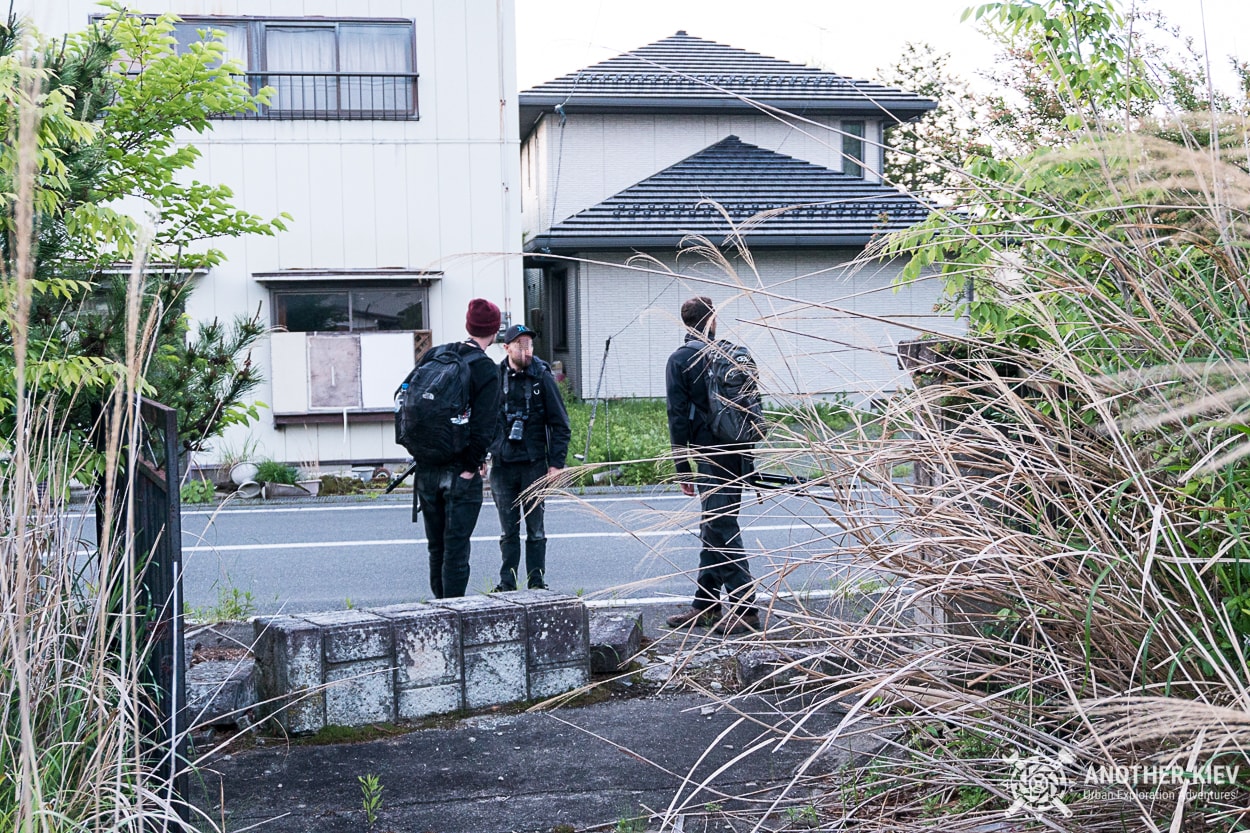 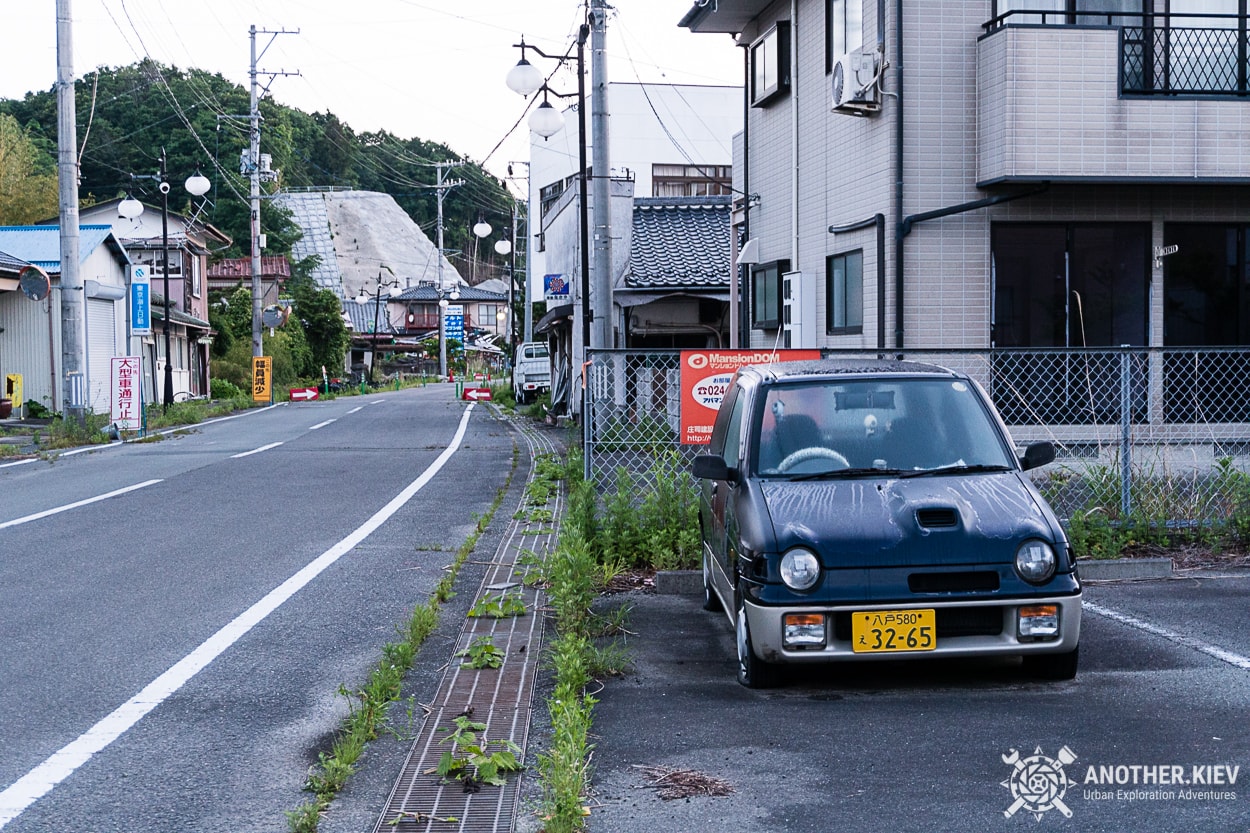 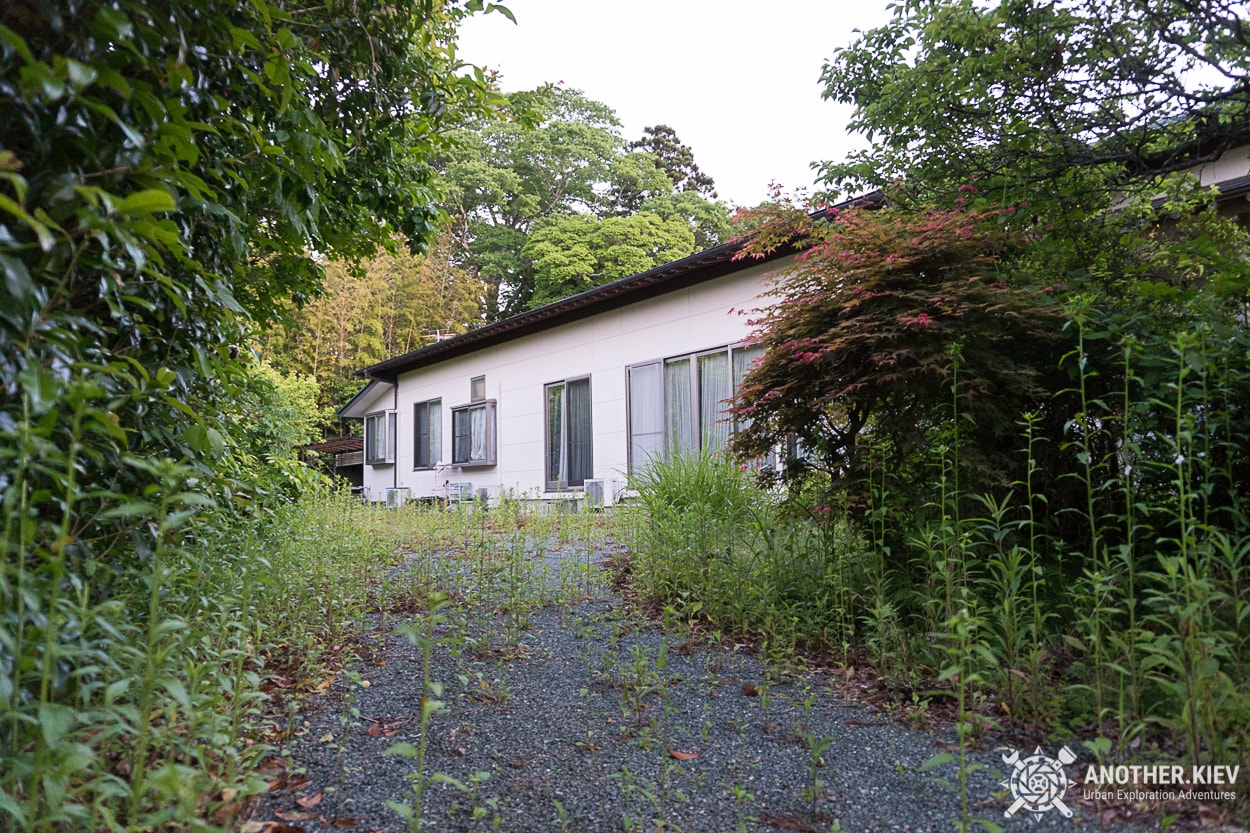 Some houses are completely in decline. Inside, everything is upside down. Wild pigs wade to the houses and turn everything inside to find food. 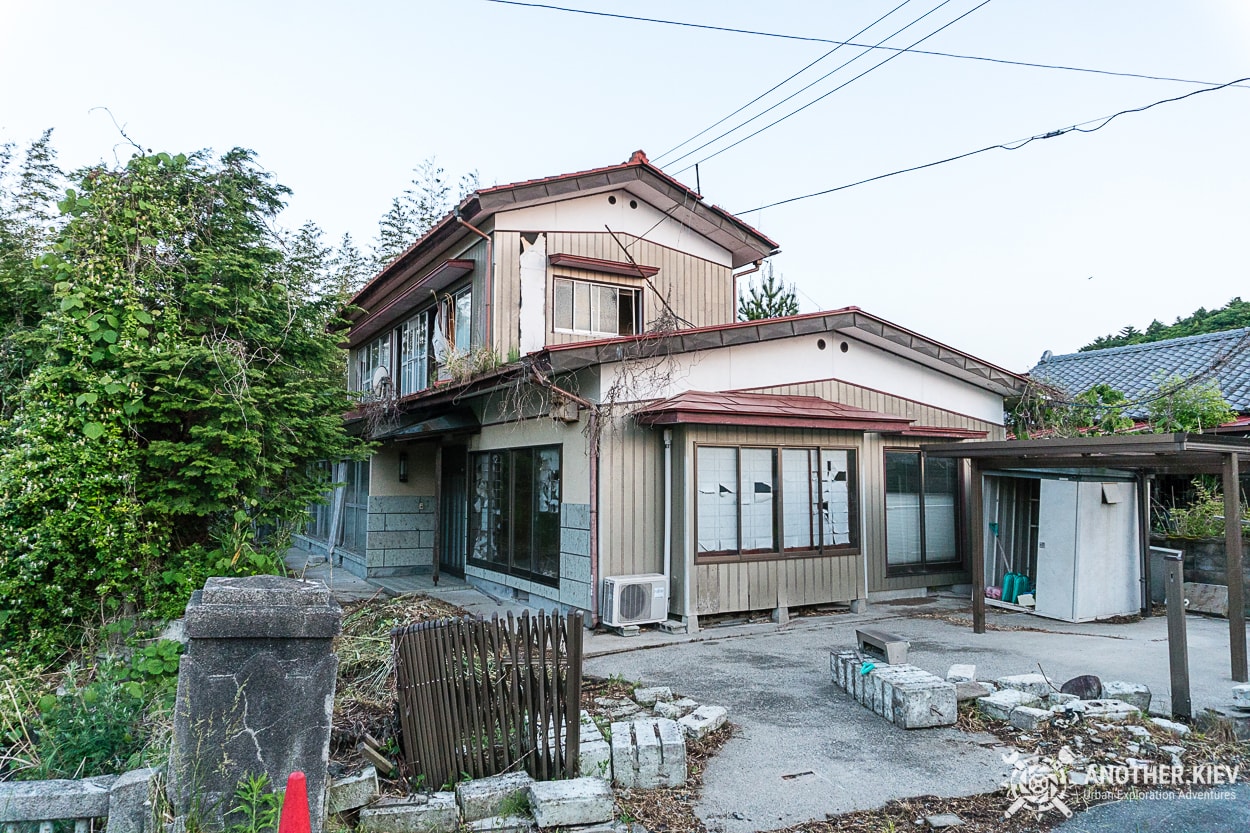 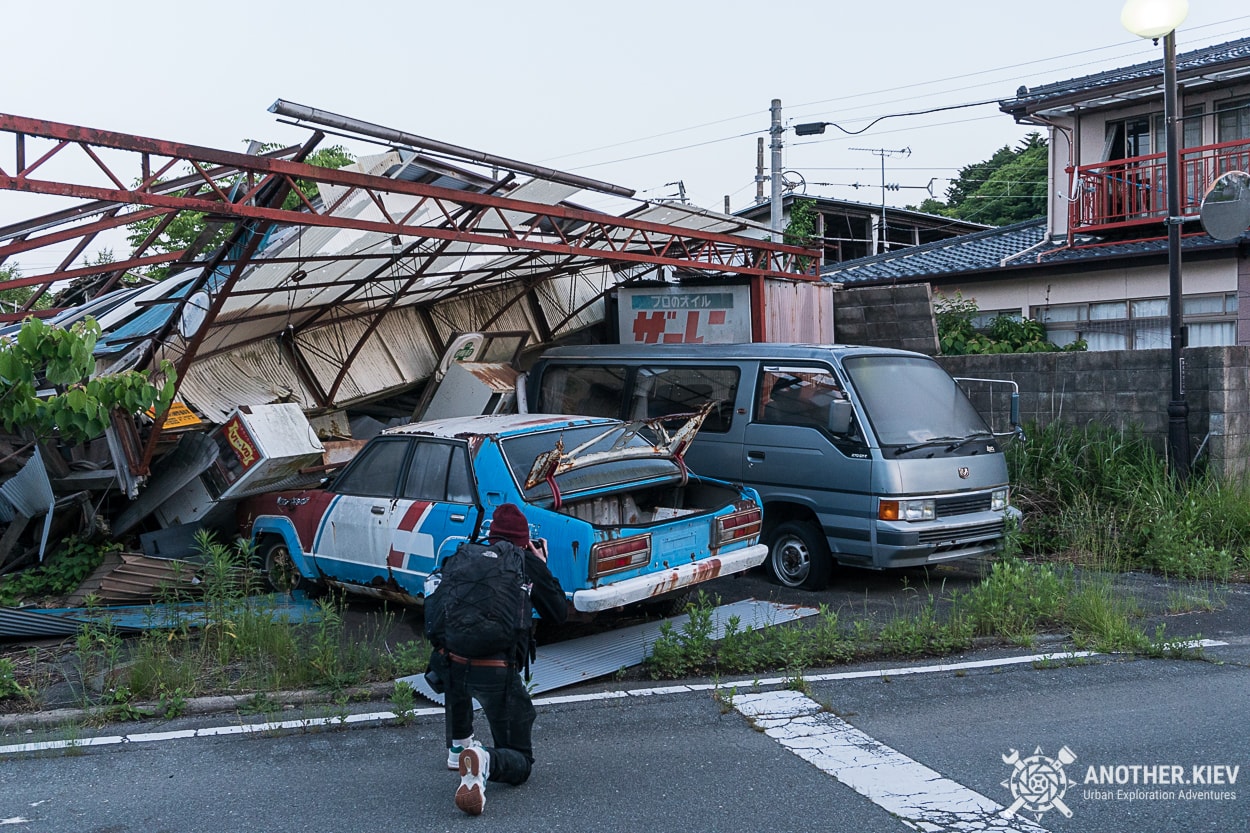 Panorama of an abandoned town. 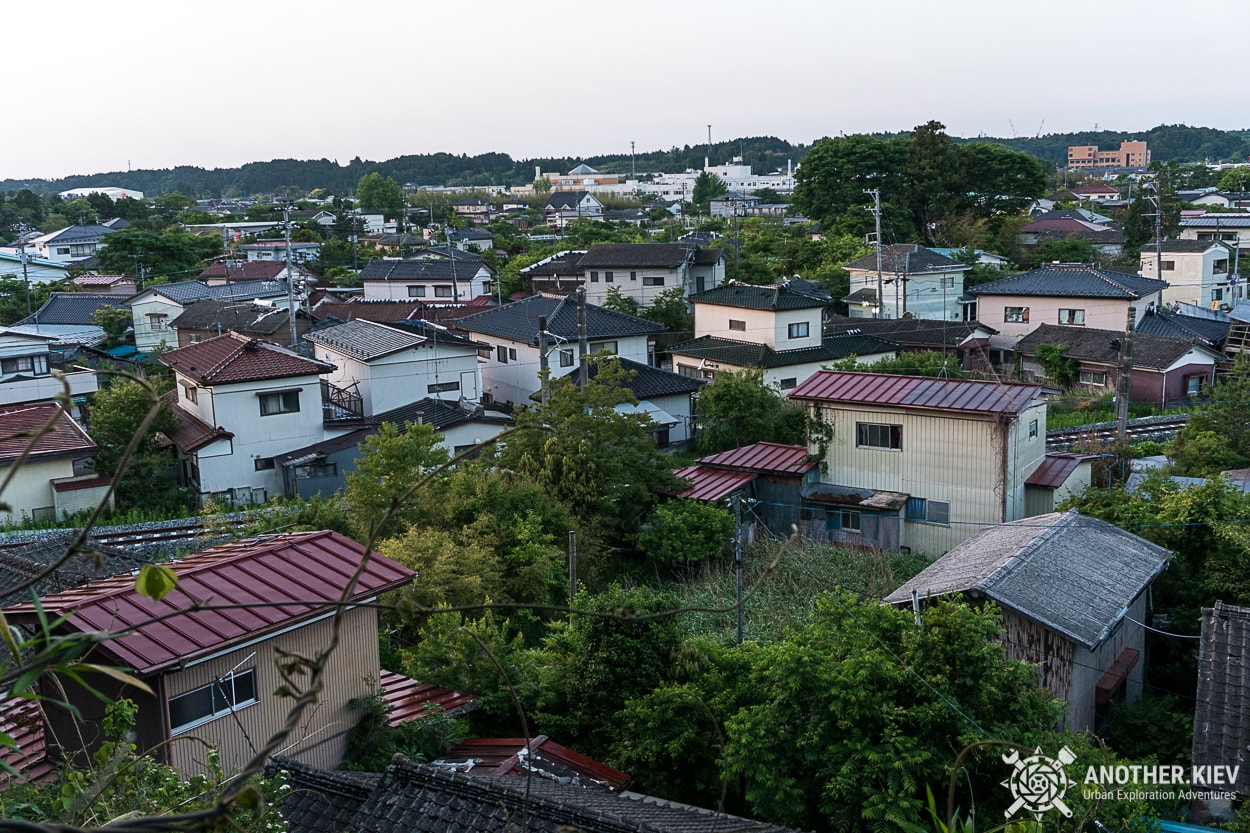 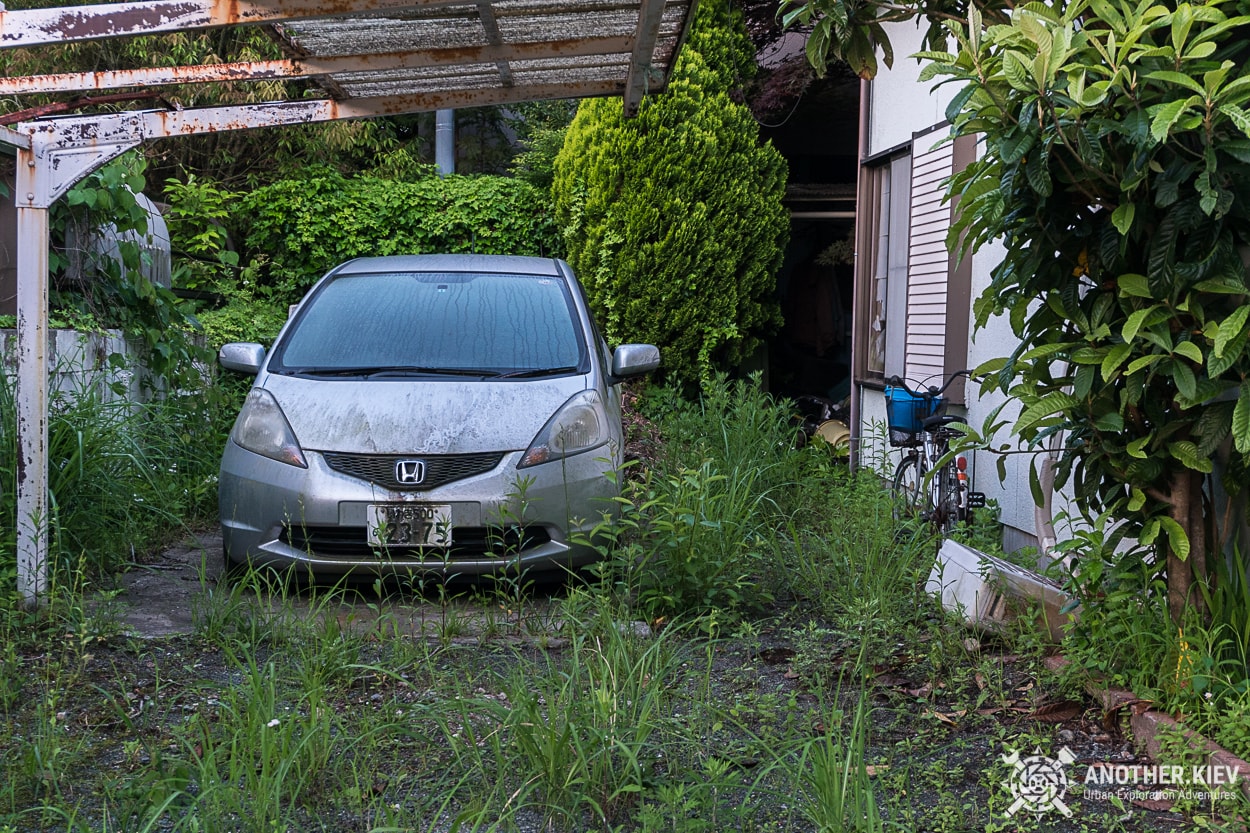 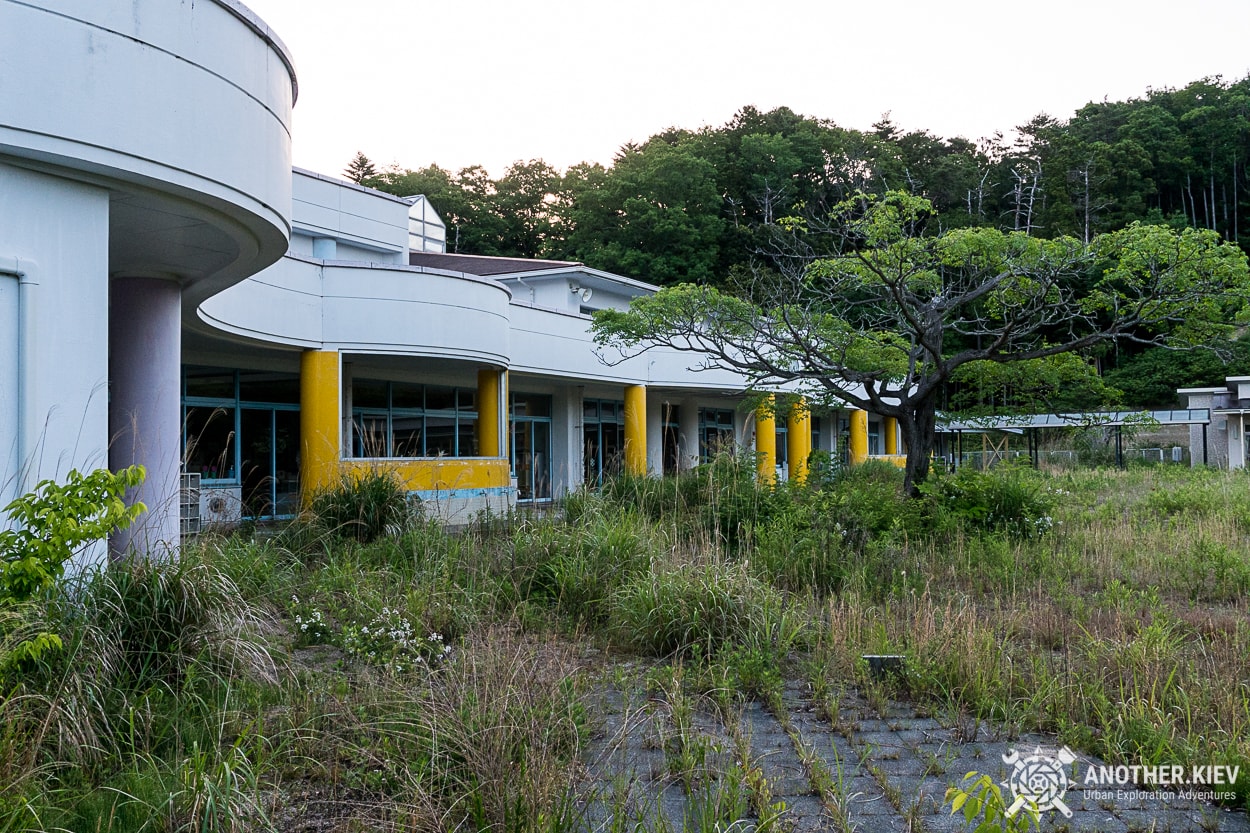 Surprisingly, even seven years later, this abandoned Japanese kindergarten looks much better than the Ukrainian one. 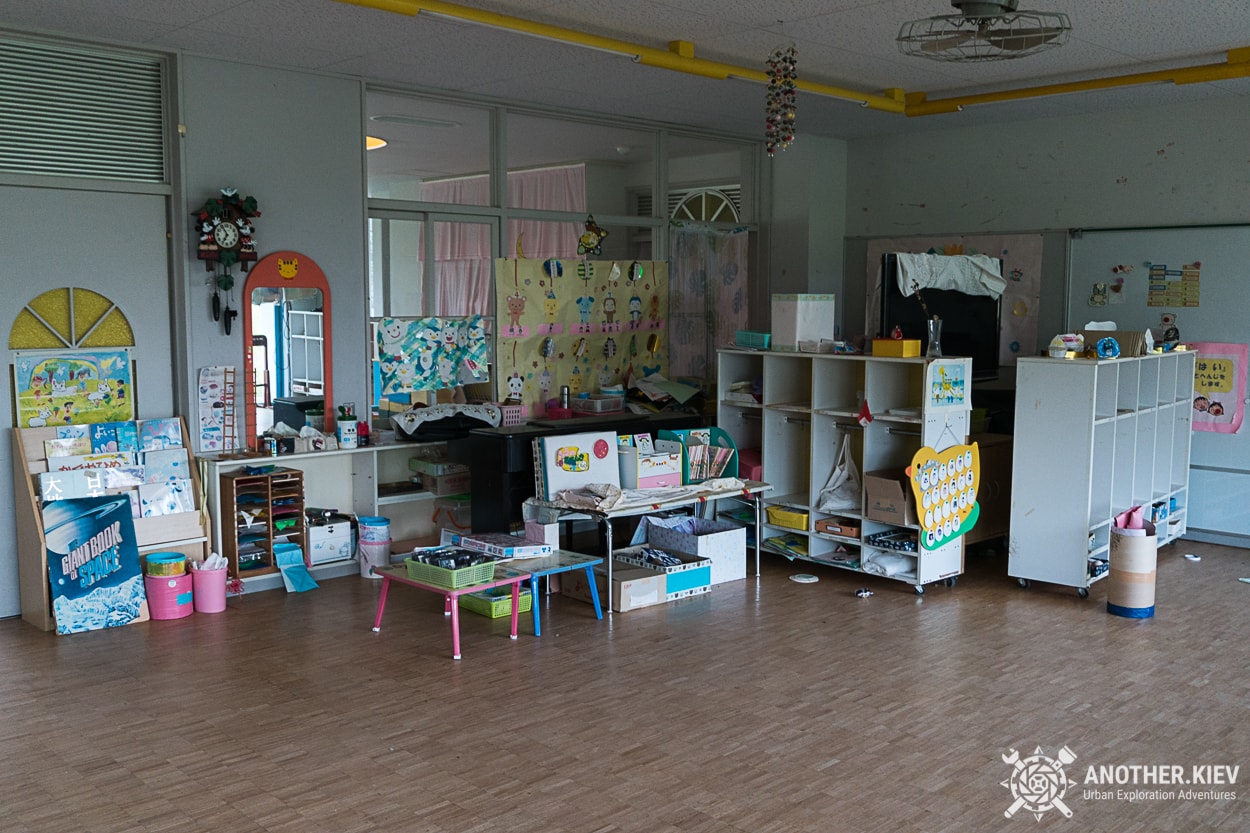 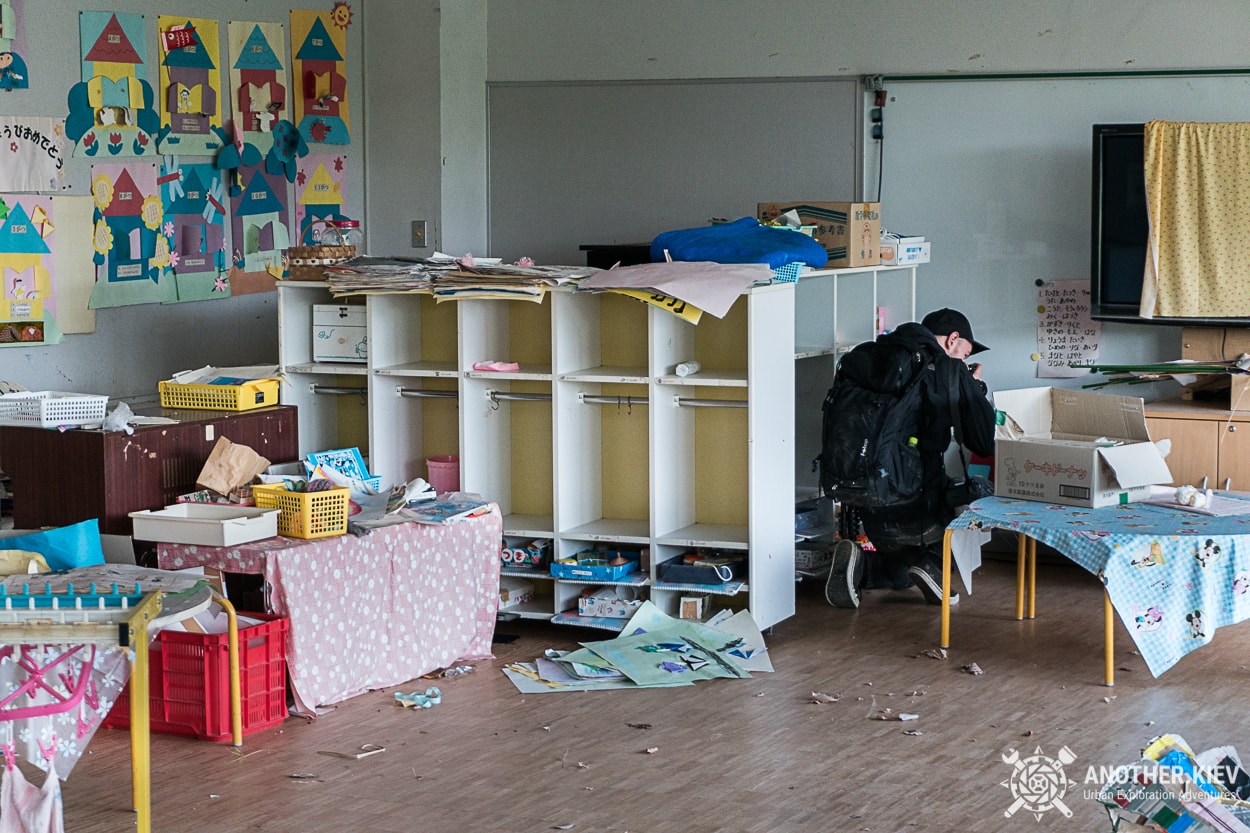 Time is pressing, it’s completely dawn and we are moving to the exit from the red zone. 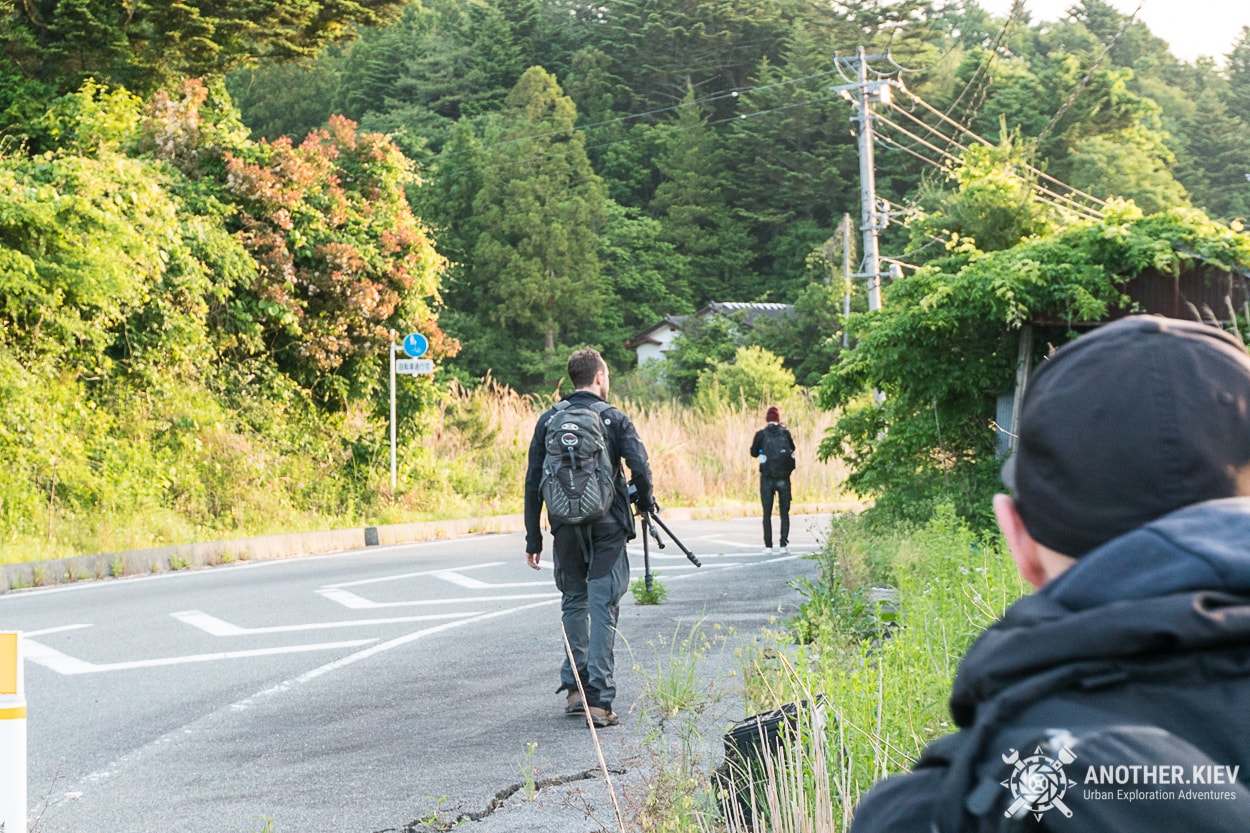 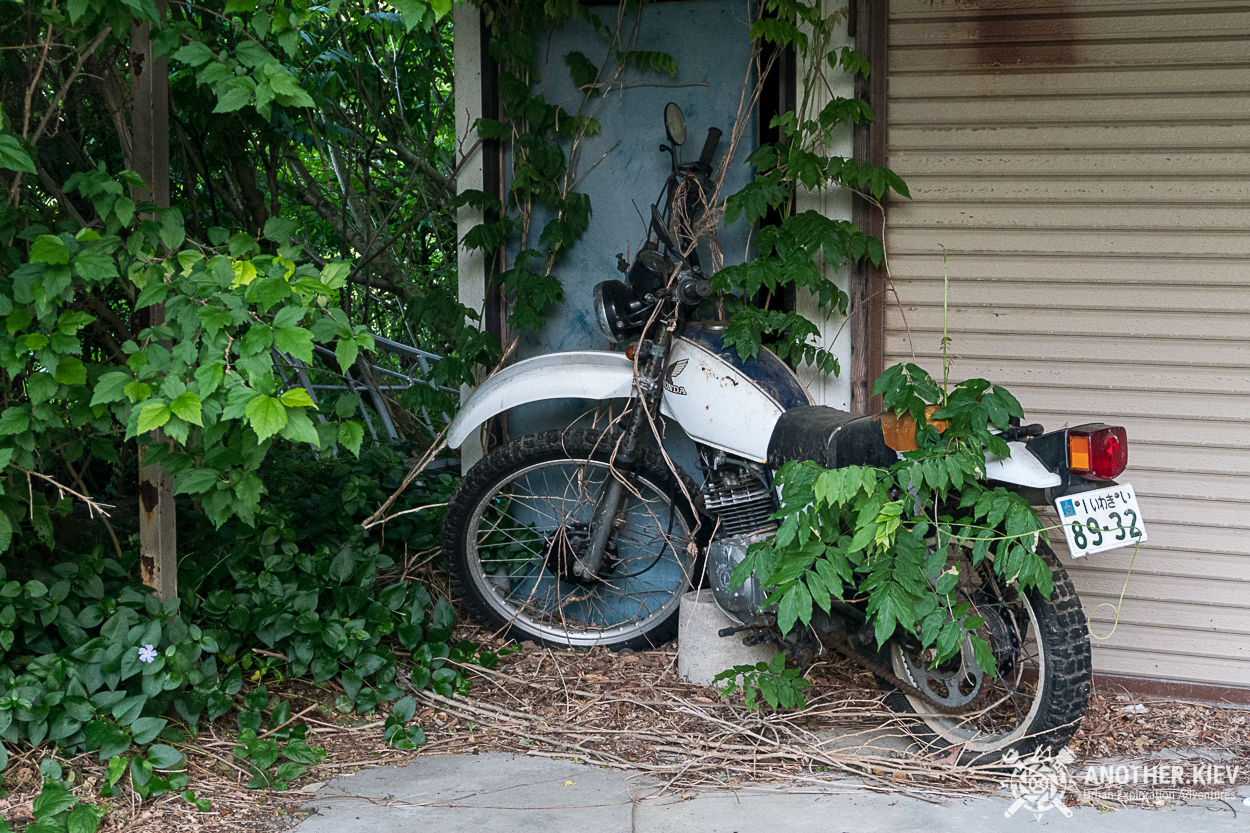 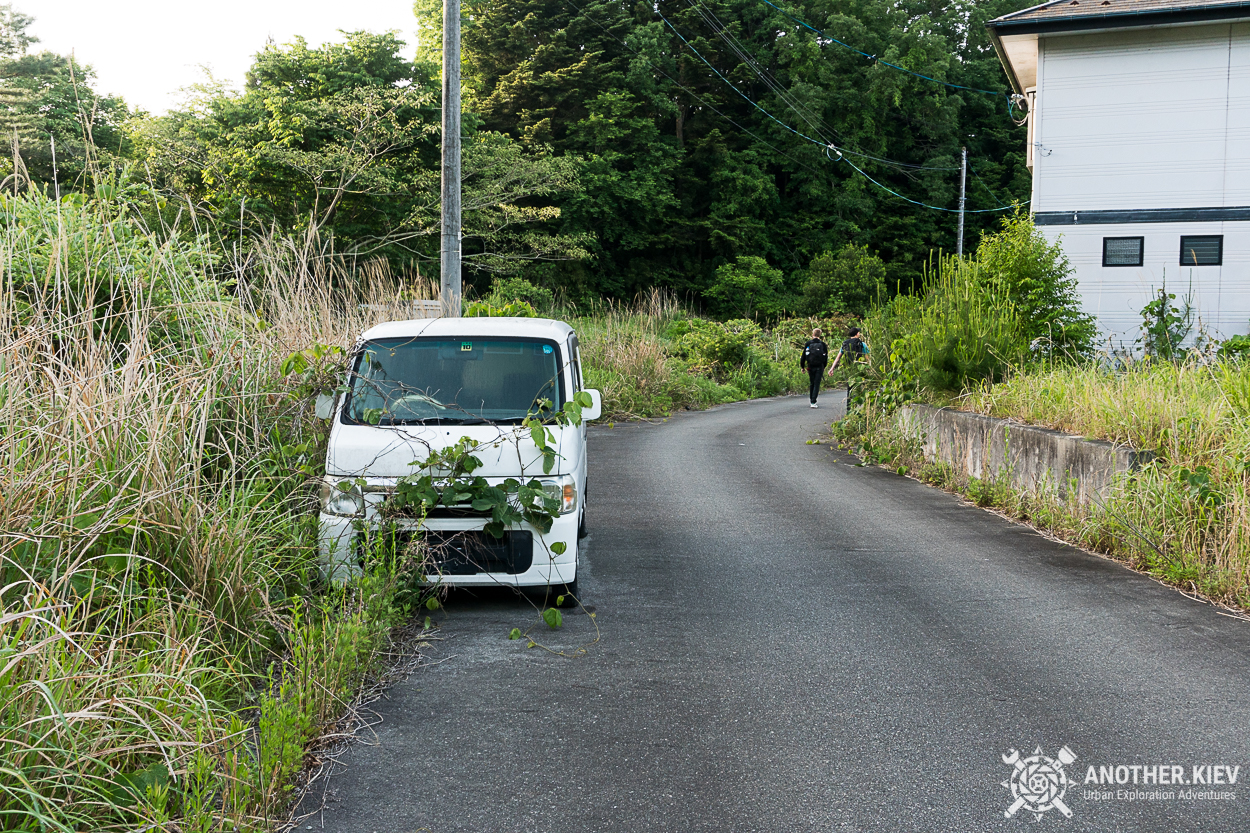 The green zone at the site of liquidation is also very interesting place, but we will write about it next time. Another.Kiev urbextour team can organize for you adventure hiking tour throw Chernobyl Exclusion Zone. Or if you will be in Ukraine, join our Kiev urban exploration tour and visit underground tunnel system and abandoned cold-war bunker.
Kyiv Underground Tour
Explore Ancient Tunnels Labyrinth Under City Center
More Info
Kyiv Urbex Tour
Unforgettable Adventure in Tunnels and Abandoned Cold War Bunker
Check Prices
Missile Base Tour
The Only One Place in the Earth where you can push Nuclear Attack Button
Get More Info
Urbex Photo Tour
Lightpainting Photography Workshop in 3 Amazing Locations
Book Now
Urbex Stag Party
Here’s everything you need to make the big bash a success!
Book Now
Previous
Next