Menu
Narrow tunnels and walls lined with bones, shrouded in legends and speculation, immediately capturing imagination. And if tourists and diggers have to cross half of the world to see it on their own eyes,  for Parisians it’s enough to take a ride right to the metro station Dunfer-Rocherot and spend less than 10 euros to enter the legendary ossuary. 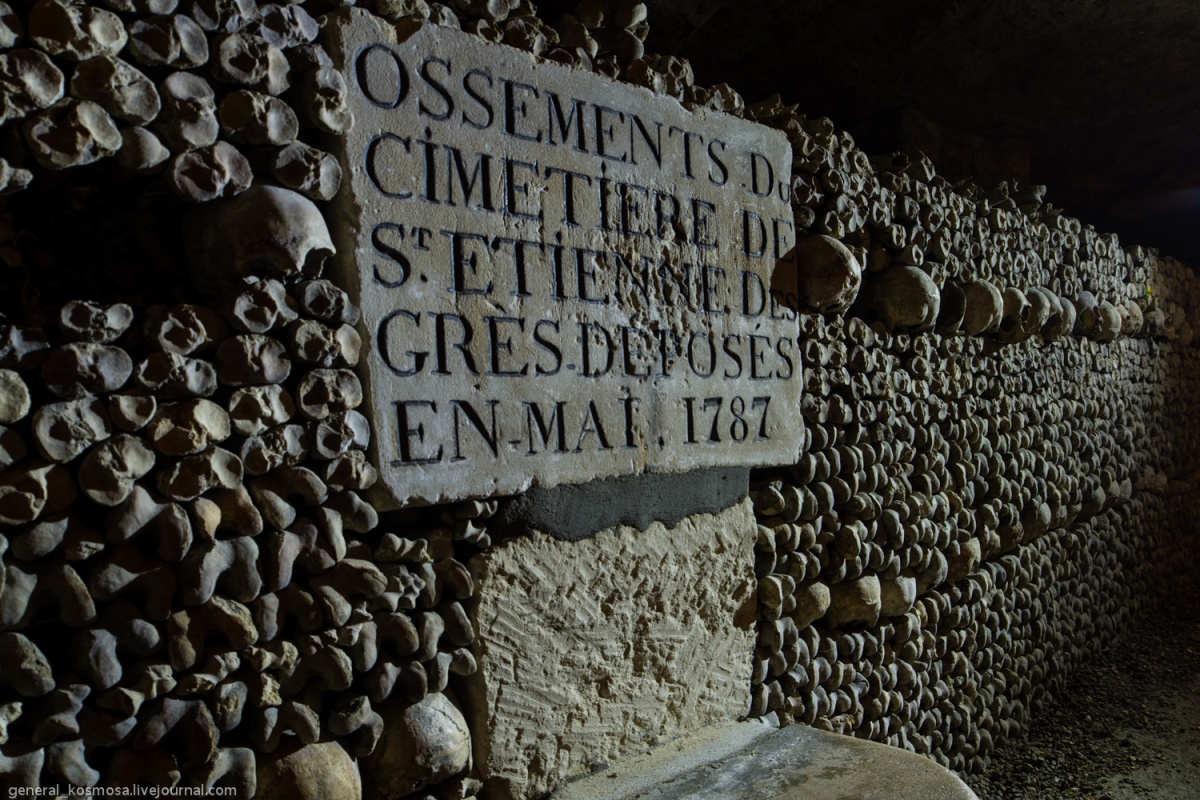 How did the catacombs began

Sometime ago on the left bank of the Seine, stone was mined, it was in the tenth century, and later manufacturing moved to the right bank as well. When the stone on the surface had ended, it was decided to go underground. The first underground work began on the territory of the modern Luxembourg Garden, with the royal order of Louis XI. Subsequently, the map of underground labyrinths began rapidly increasing, capturing such streets as Saint-Germain-des-Prés, Vaugirard, Saint-Jacques and Gobelin, and even passed along the Val-de-Gras Hospital. 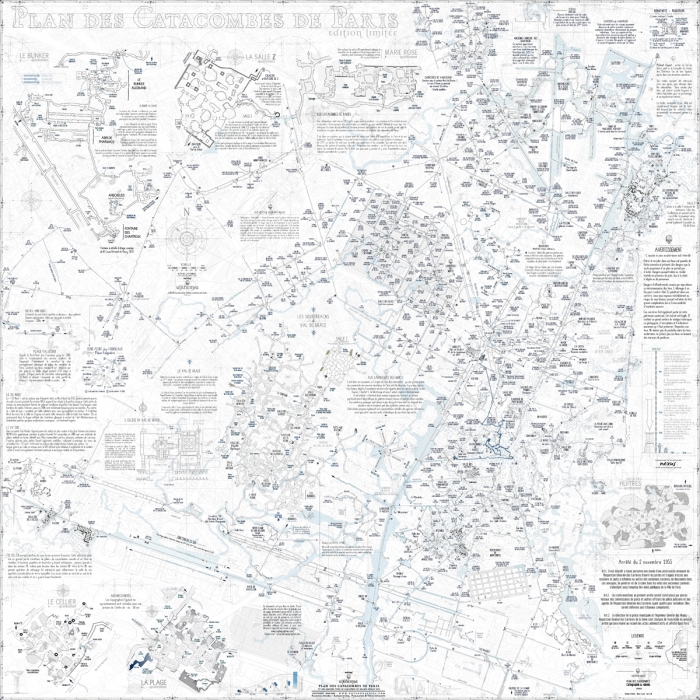 The map of modern cataconbs.

The catacombs became longer and longer, and the first time empty underground niches were used by the monks. Most of the catacombs took place just in the immediate vicinity of their cloister, so in 1259 they have started to organize the first wine cellars there. 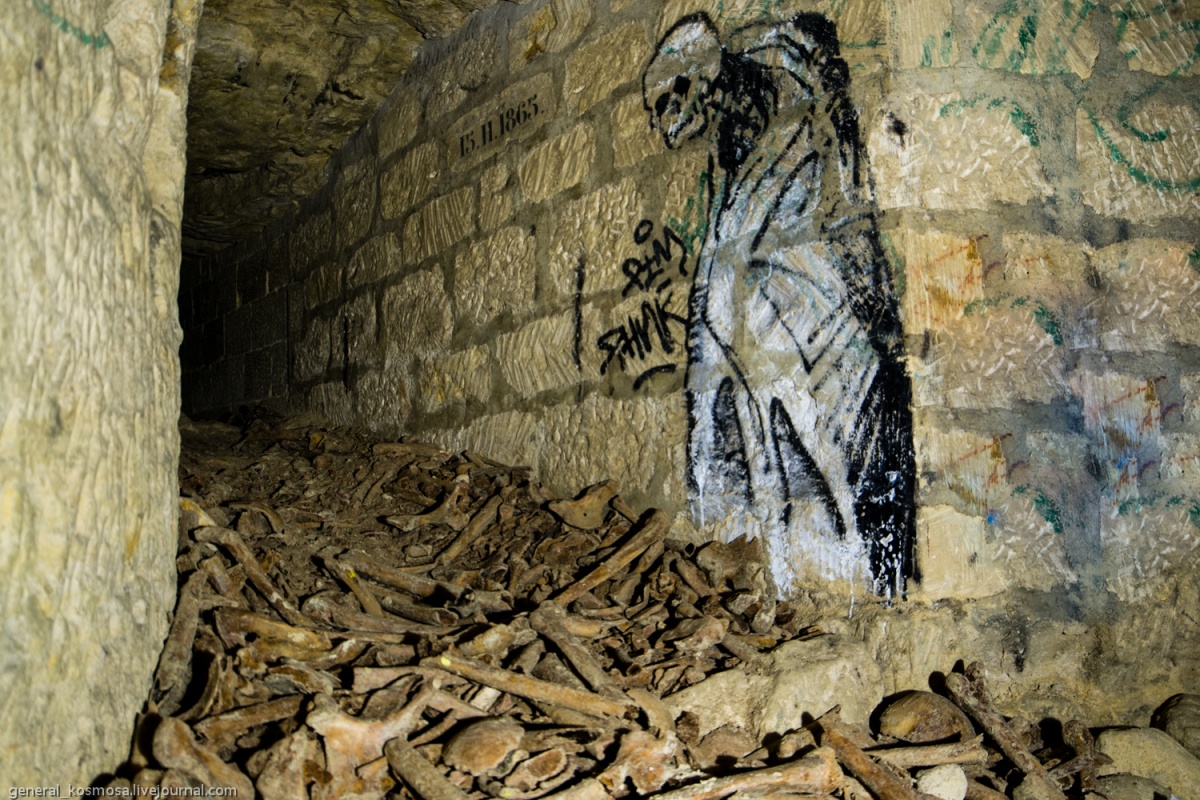 Now there are bones, but once monks kept their wine here.

Everything was well and safely until the 17th century, when the overgrown city and the quarries had crossed for the first time. It was the obvious danger in placement of urban buildings over the unfortified abyss. By the spring of 1777, the problem had reached its apogee, and this was confirmed by the General Inspectorate, assembled by Louis XVI. This institution exists up to this day, engaged in checking the status of the dungeons. Unfortunately, the time and obstinate Sena carry out subversive work, and the most frequent solution of the problem is concreting of problematic niches. 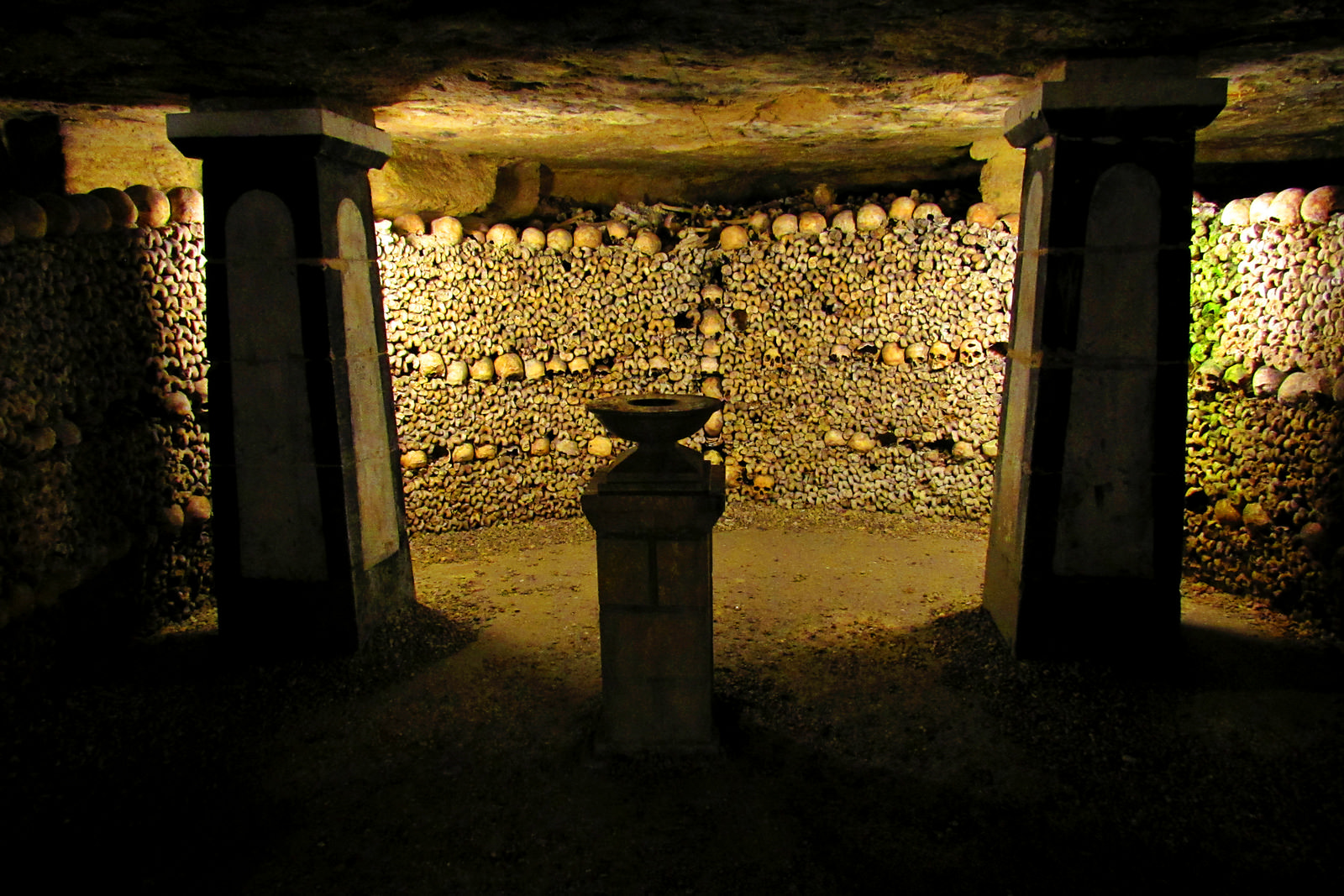 Tales from the crypt

There was a decision In Paris to bury the dead outside Paris. At that time life was not sweet, and the number of dead was significant; there was not enough space. Only “thanks to” the plague epidemy in 1418, about 50,000 people joined the ranks of the dead. 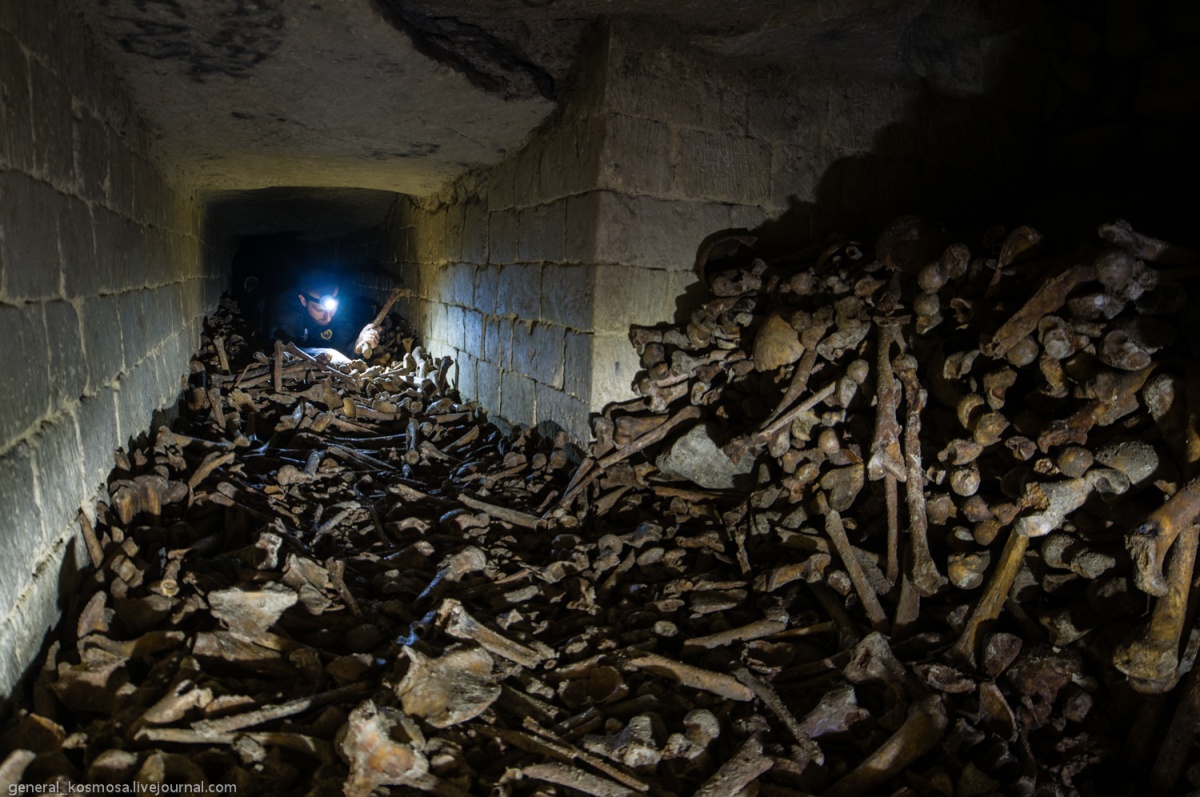 Even today it is necessary to “swim” over the bones.

For all the graves and passages to another world, according to God’s rules, the church that institution that conducted the funeral and sold the place in the cemetery closely watched. In addition to duty to the highest forces, it was the main business of the clergy. The cemetery of the Innocents has been working since the XI century, and managed to become the last refuge for dozens of generations. 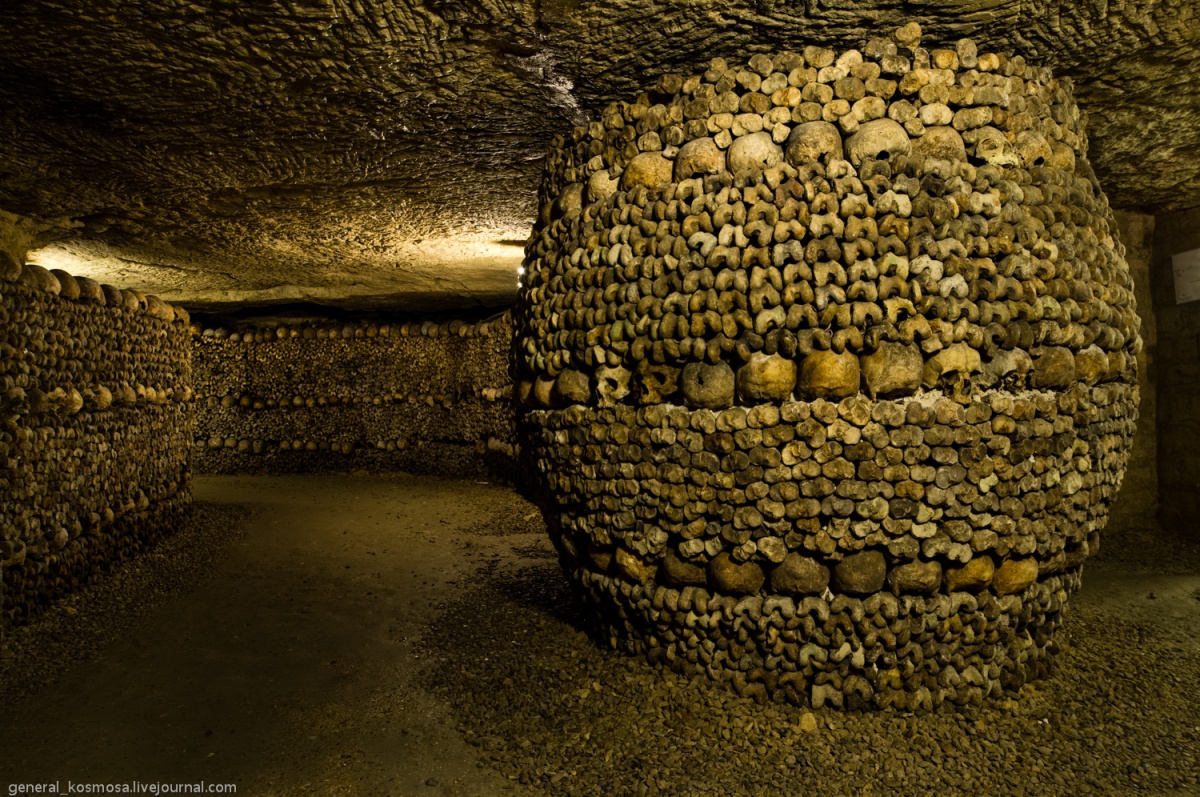 It’s hard to imagine how many stories these bones keep.

After epidemics and other sad events, it was decided to bury the dead in mass graves, the depth of which sometimes reached 10 meters. Only on 7,000 square meters. m.  there were more than two million dead bodies. In conditions of poor sanitation and a low level of medical education, this resulted in waves of infections and intensified the dubious practices of the latter-day wizards and healers. 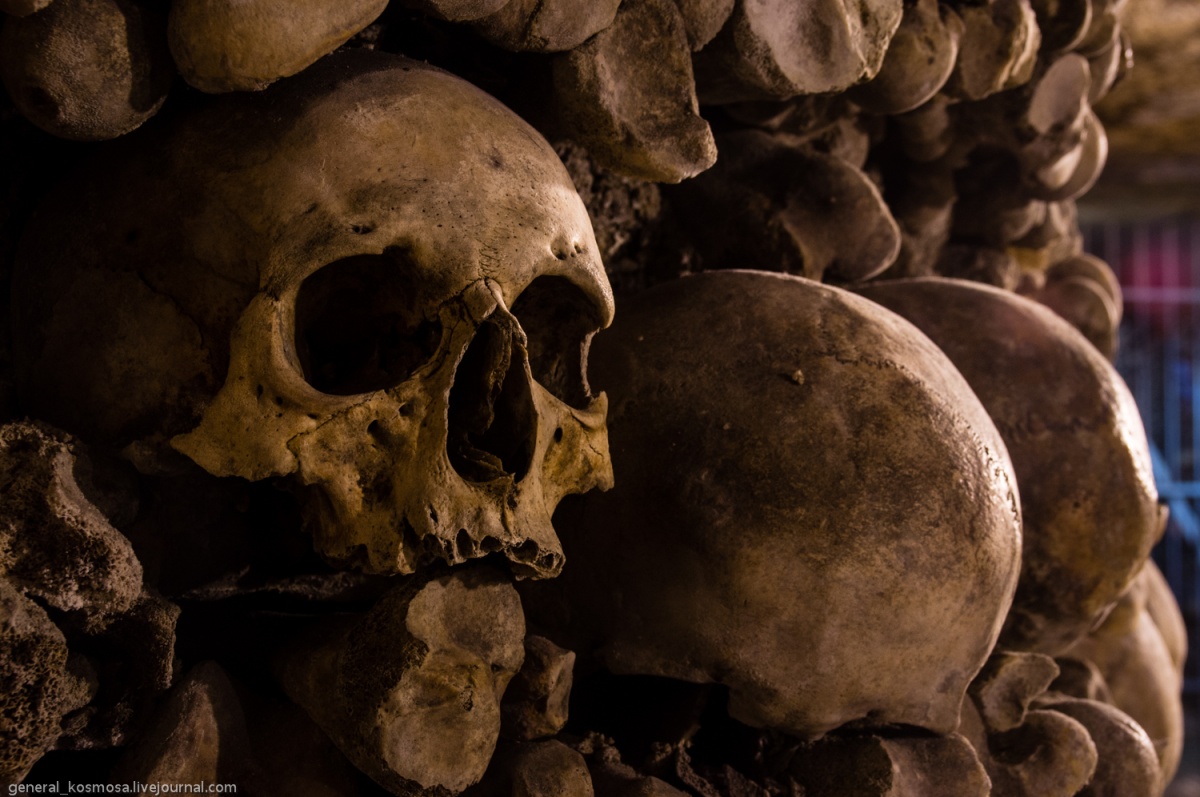 Everything went in this mode until the wall separating the cemetery of the Innocents and the catacombs did not collapse. It was immediately decided to transfer the remains to empty quarries, not only from the cemetery of the Innocents, but also from other necropolises that surrounded Paris from other sides. The collection and disinfection of bones took more than a year; people worked during the night worked immediately become the heroes of different legends and rumors. After registration of the ossuary, it has became an integral part of the underground of the French capital. It is noteworthy that to this date they have reached almost in its original form.

Despite the fact that the catacombs occupy about 300 kilometers, burials make up a small part of them. For tourists now open about two kilometers, and the ossuary (the part with bones) turned into a museum. You can get into it by buying a ticket at the box office, giving about 8 euros, and going down 20 meters below the ground. The tunnel leading to the main halls is full with various phrases about death and fancy sculptures. It was these catacombs where Marat, Pascal, Perrot and other famous Parisians found their last refuge. Explore Kyiv Dingeons with Guide who knows the most unexpected secrets of the Ukrainian capital! 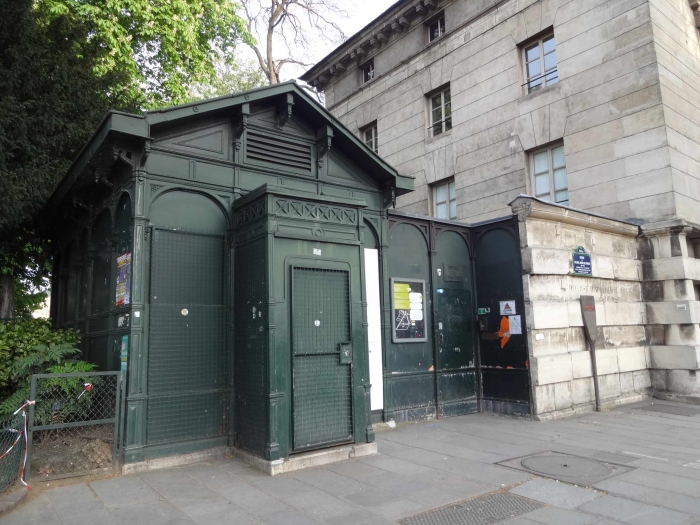 This inconspicuous booth is where the entrance to the catacombs for tourists begins.

But some parts of the dungeons are hidden from the eyes of ordinary visitors, and they were chosen by diggers, speleologists, and, of course, cataphills. The popularity of the catacombs is directly proportional to the strengthening of control, so the illegal climbs quickly lose their relevance. Today it’s getting harder and harder to get to the dungeons, but in the 70s there were noisy parties and gatherings. In addition, due to the constant threat of collapse, some premises are simply concreted, and access to them is lost forever. 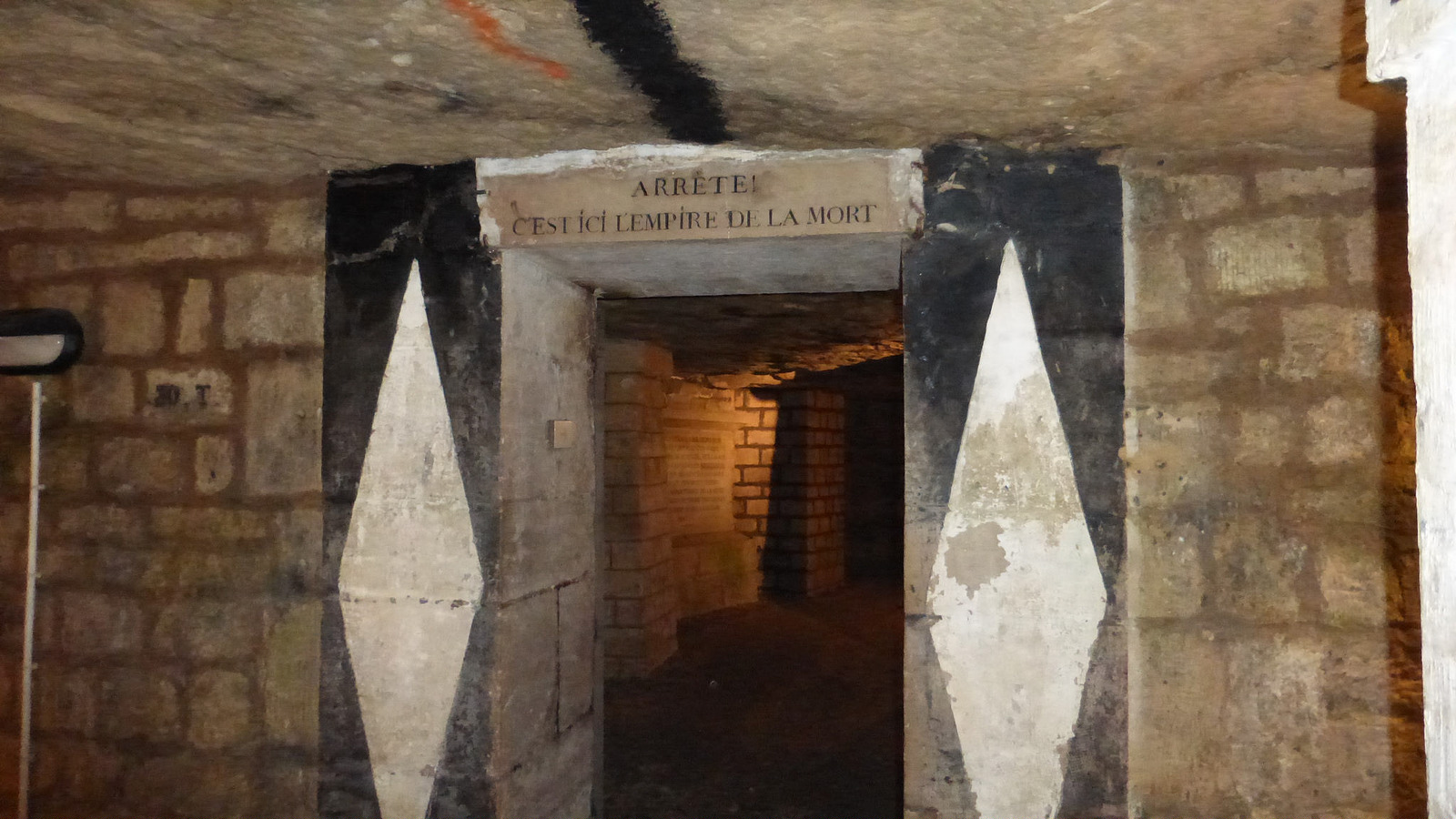 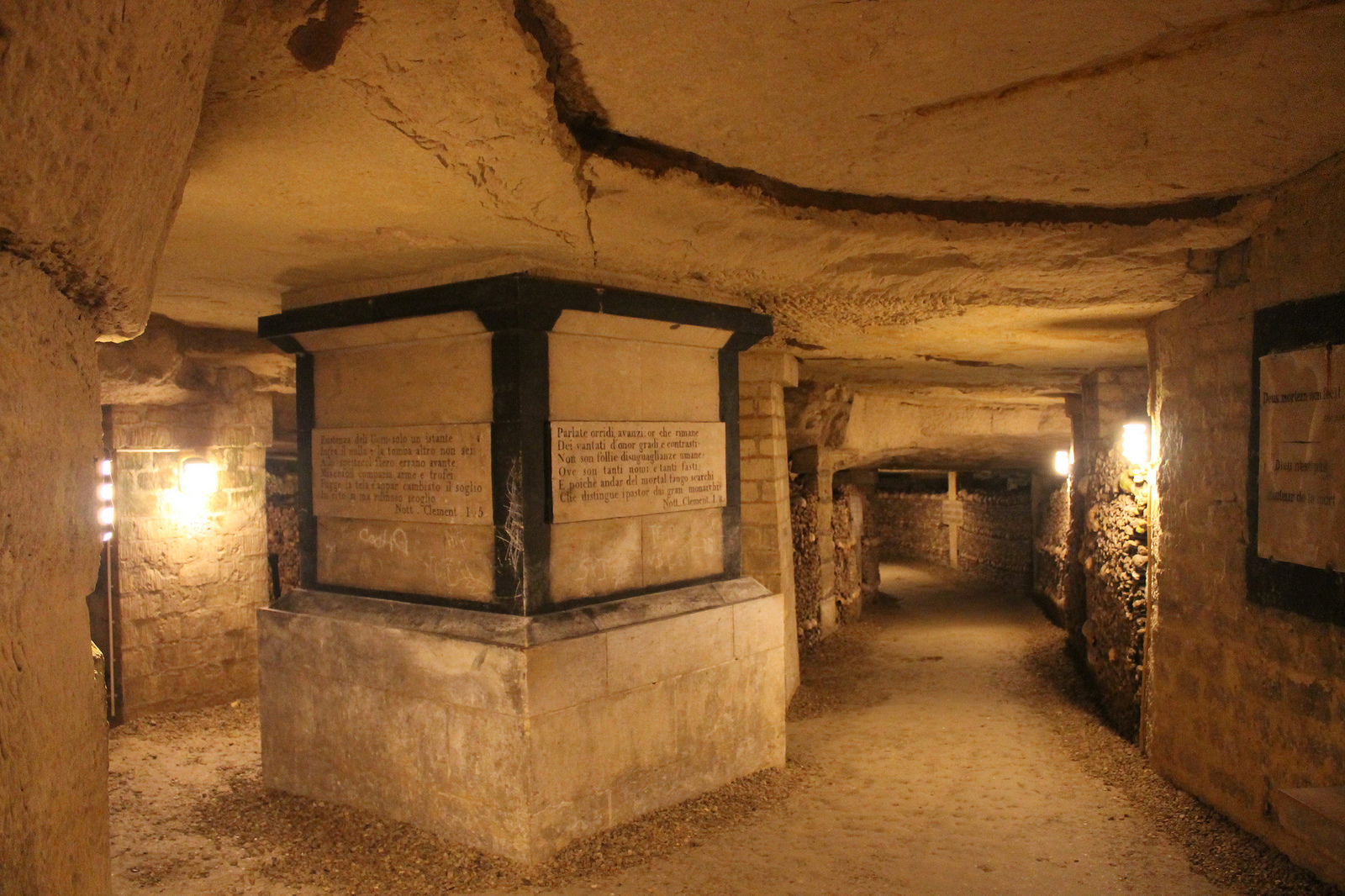 This is what greets tourists in the cultivated part of the catacombs.

In the grotto with the nice name “The Beach”, which is still the center of gathering of the underground party-goers, you will be met by waves in the spirit of Katsushiki Hokusai. On Saturday evenings crowds of people literally gather here. This is far from the only manifestation of art in the maze. In many points of the tunnels you can find various sculptures and drawings on the walls. 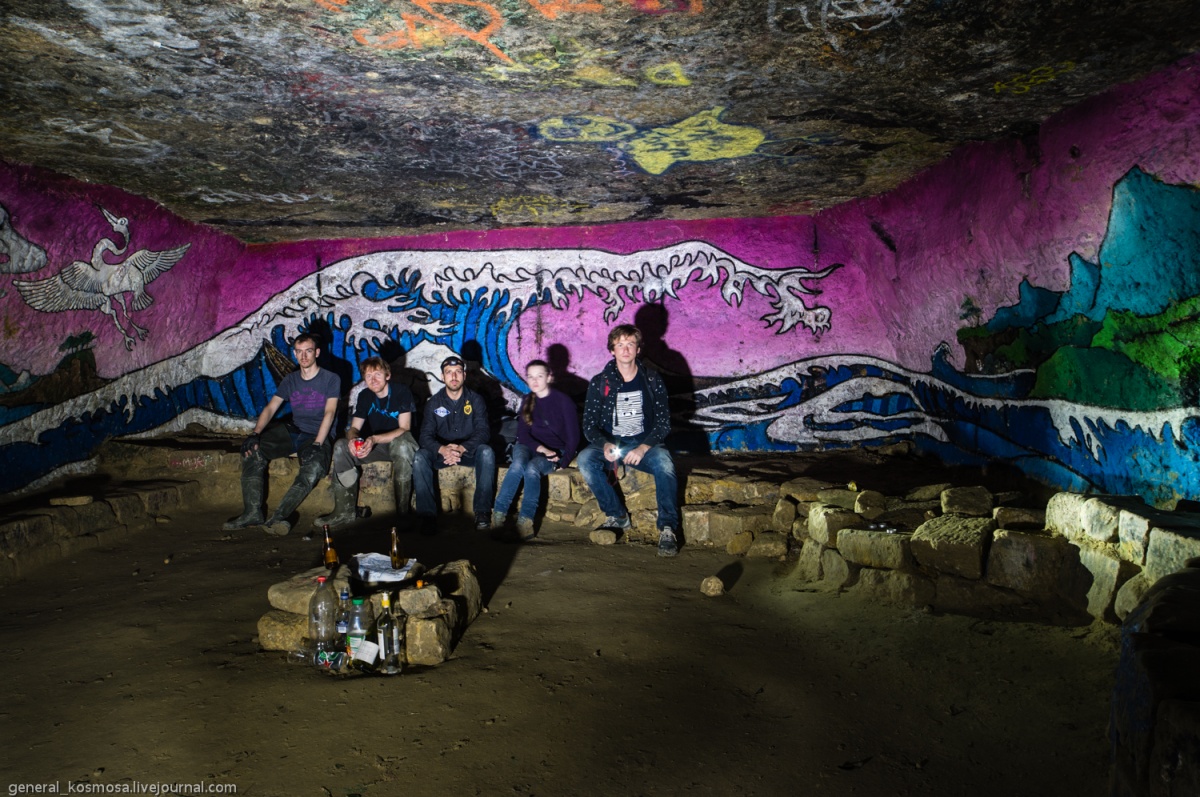 Illegal excursions are not just a contribution of enthusiasts to acquaintance with the history of the French capital, but a full-fledged business. There are a lot of people willing to see the real catacombs and ossuaries. Fortunately Parisians try not to forget this layer of their history. They drawing homemade maps, holding parties, and adding more and more artistic objects. 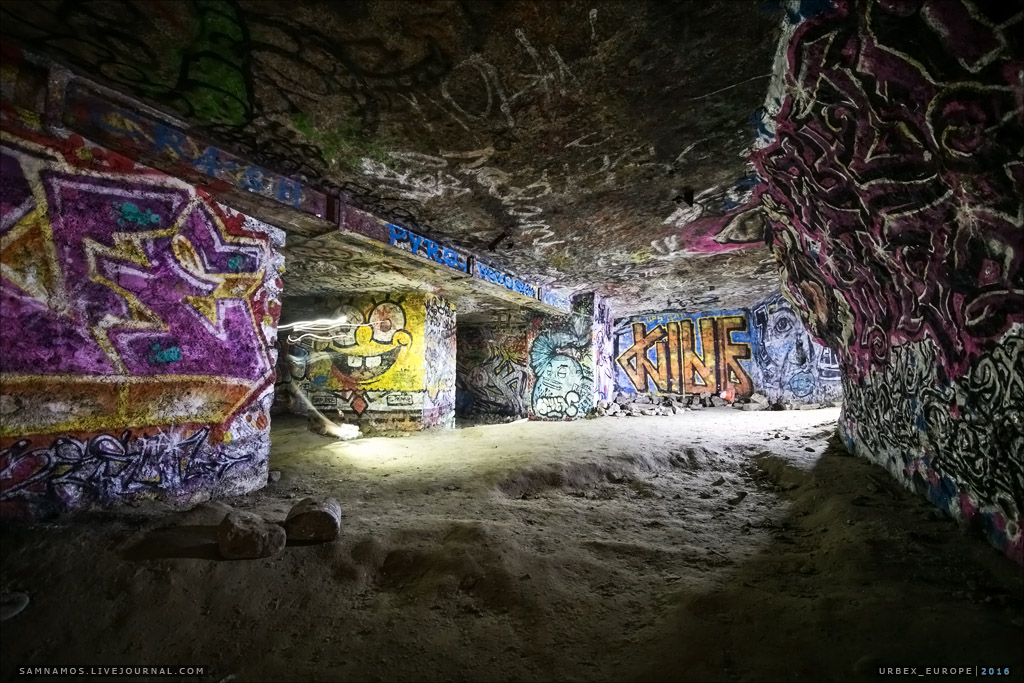 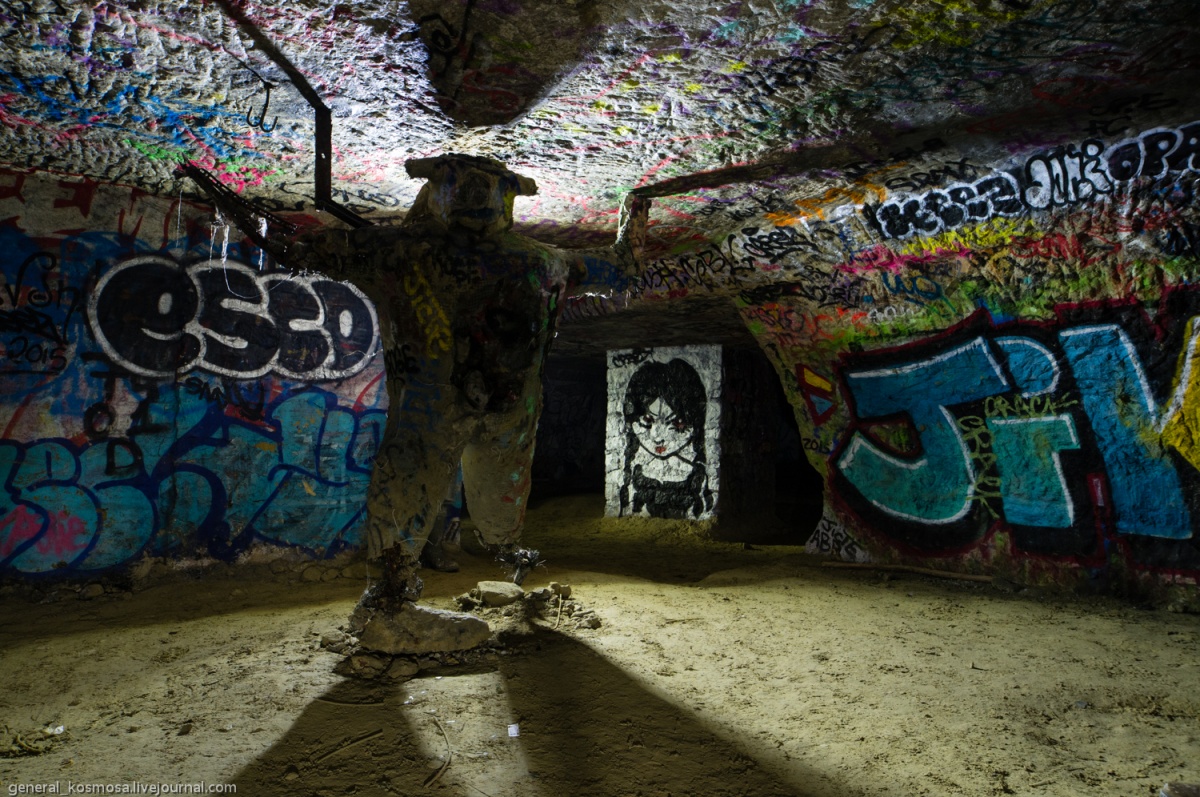 Far from gloomy walls of dungeons.

Lying generations of bones not only serve as evidence of past centuries, but also become covered with specks of modern history. It remains to hope that the ossuary and the adjacent catacombs will last more than one hundred years without drowning in a concrete trap. 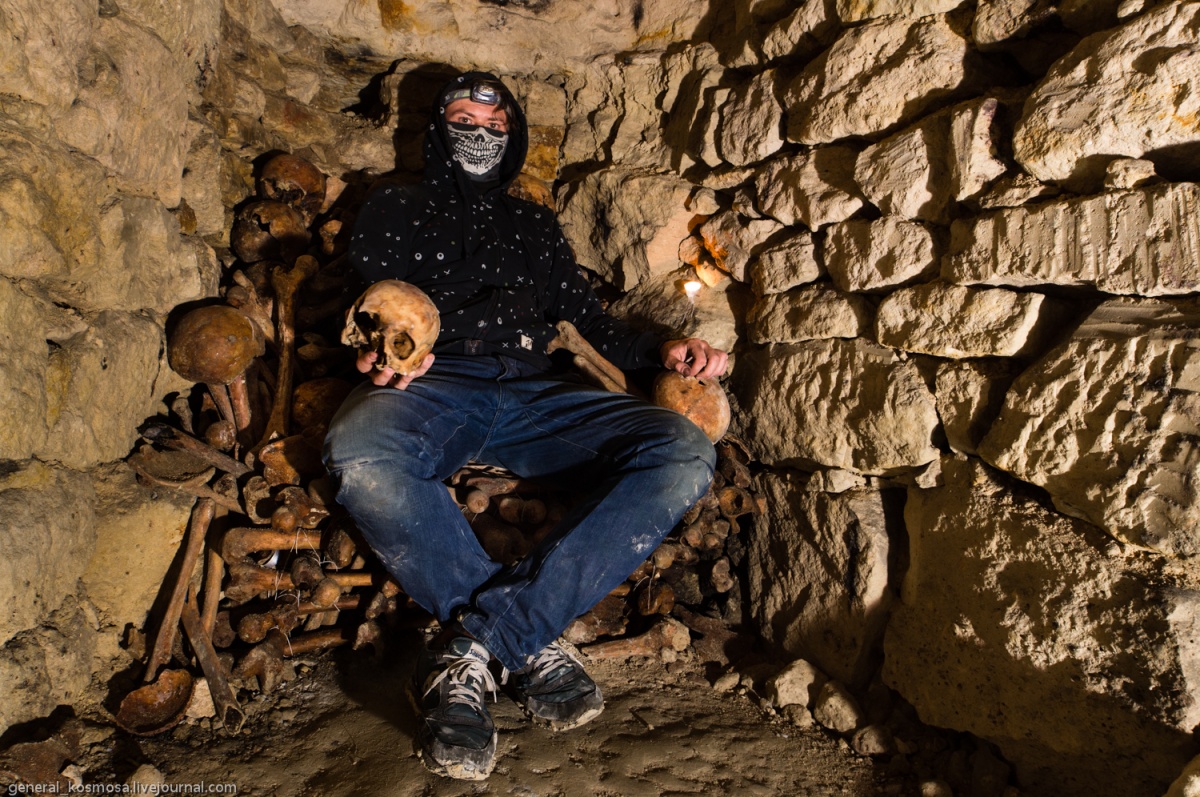 The bravest have a chance to feel like the king of the dungeon.