During traveling the picturesque expanses of Albania, it is impossible not to notice evidence of the total militarization of the country. The communist regime under the auspices of Enver Hoxha raised the question of solving military tasks above economic and social ones. During the reign of Hoxha (1941-1985), who feared invasion from all of its neighbors, Albania was building a very diverse defense infrastructure. There were built over 700 thousand small bunkers: one for 4 inhabitants of the country. The density of bunkers’ localization is 24 pieces per square kilometer. Small bunkers were located in groups of three or even more, in the places of the most likely enemy attack. In addition, with substantial technical and material support from the allied communist powers, first the USSR and later China, who wanted to strengthen their strategic interests in the Mediterranean region, underground shelters for submarines and boats, underground air bases, protected command posts, and even factories were built in the depths of the Albanian rocks. However, after the fall of the regime in 1992, almost all objects of this kind were decommissioned, frozen, or simply abandoned. In addition, we’ll suggest about one of such abandoned underground plant that…

On that December day, after an unsuccessful attempt to get foot into the territory of one of the air bases, my exhausted comrades cherished themselves only with thoughts of meeting the sunset from the top of a snow-covered mountain range. The car rushed swiftly into a winding serpentine, when suddenly, outside the window, a stuffed eye snatched the outlines of distinctive structures scattered along the slope of a rocky hill, forcing us to immediately and unconditionally change the route and reconsider plans for the evening.

Getting off the road, we headed straight into the forest, where, literally a few meters in front of us, the previously seen huge reinforced concrete ventilation cabins, hiding bottomless trunks, appeared fifty meters deep, at a rough guess, were placed.

Nobody had any desire to descend into the cold-breathing dark abyss along the vertical cable car, and as a result, we continue to explore the surroundings, moving to the base of the mountain, passing many technical constructions, hoods, cooling towers and perimeter remains on the way.

Thus, we descended into the valley of a small town with the Chinese name of Politan.

The town itself was built in the 1960-s with purpose to create an industrial center for manufacturing of weapons and ammunition. During the communist regime, the region was barred from foreigners. The production facilities of the military factory are located in the valley, now reminding ruins; little houses of the workers and their families were located not far from this point. On the outskirts of the city, right across the road from the private sector, dozens of portals covered with thick concrete gates left behind the sagging barbed wire to the base of the rock.

Locals look with distrust at foreigners; tourists are not often met here, especially in winter. After a cursory examination of the territory from behind the fence, we hurried to retire, so as not to attract undue attention to ourselves. Only the midnight gloom descended the mountains, as our team again set foot on a steep path, gliding shadows of silhouettes along the ledges of rocks and concrete structures, illuminated by the dim light of a searchlight. 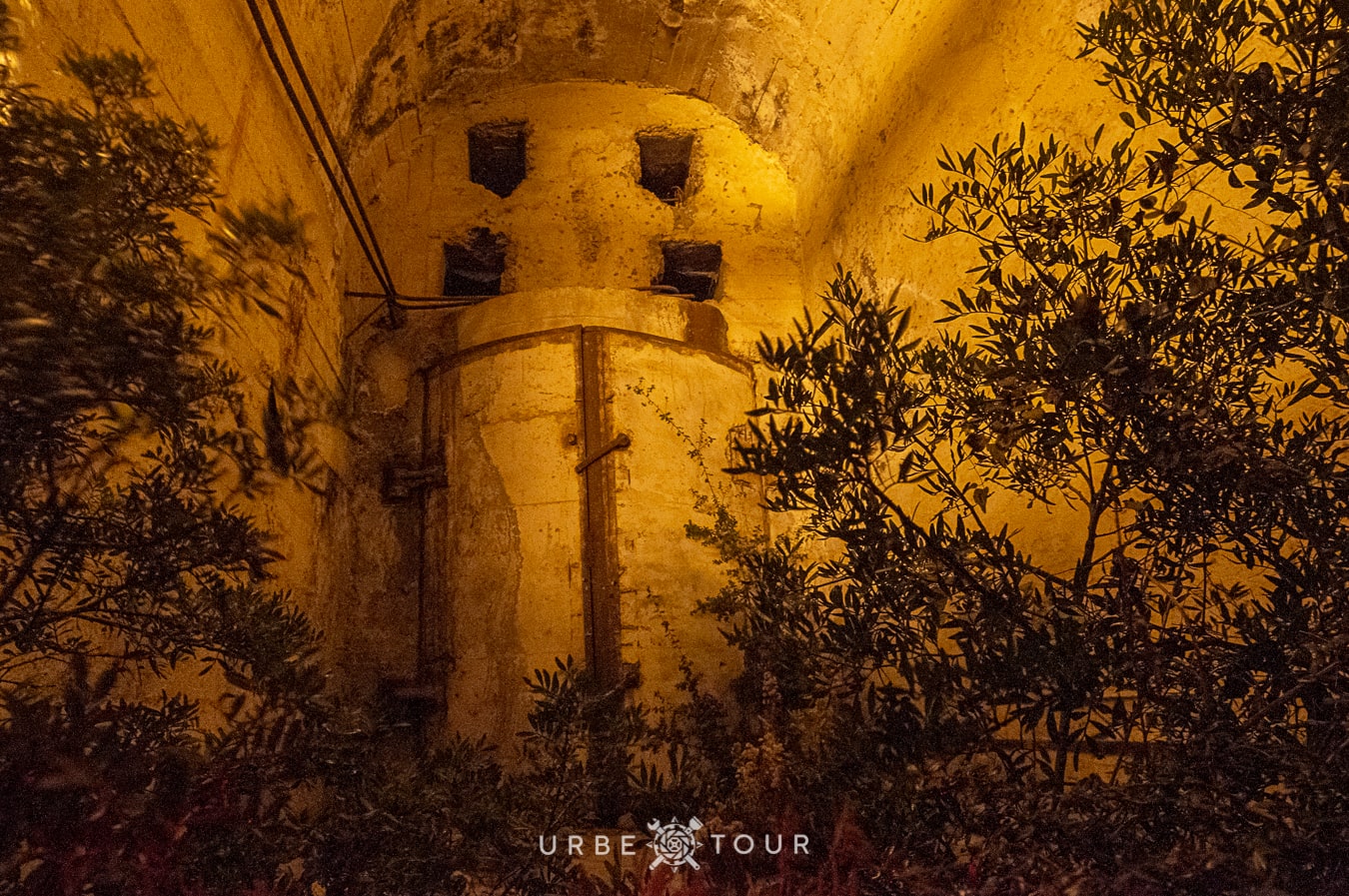 After squeezing through the air intake in one of the portals overgrown with olive trees, we found ourselves in a ventilation room. There are situated huge air conditioning systems, refrigerators, blowers and other equipment installed. The size of the duct pipes allows to move almost freely through them between the blocks of the object.

Kyiv Underground Urbex Tours are open for all, who invole in exploring this world! 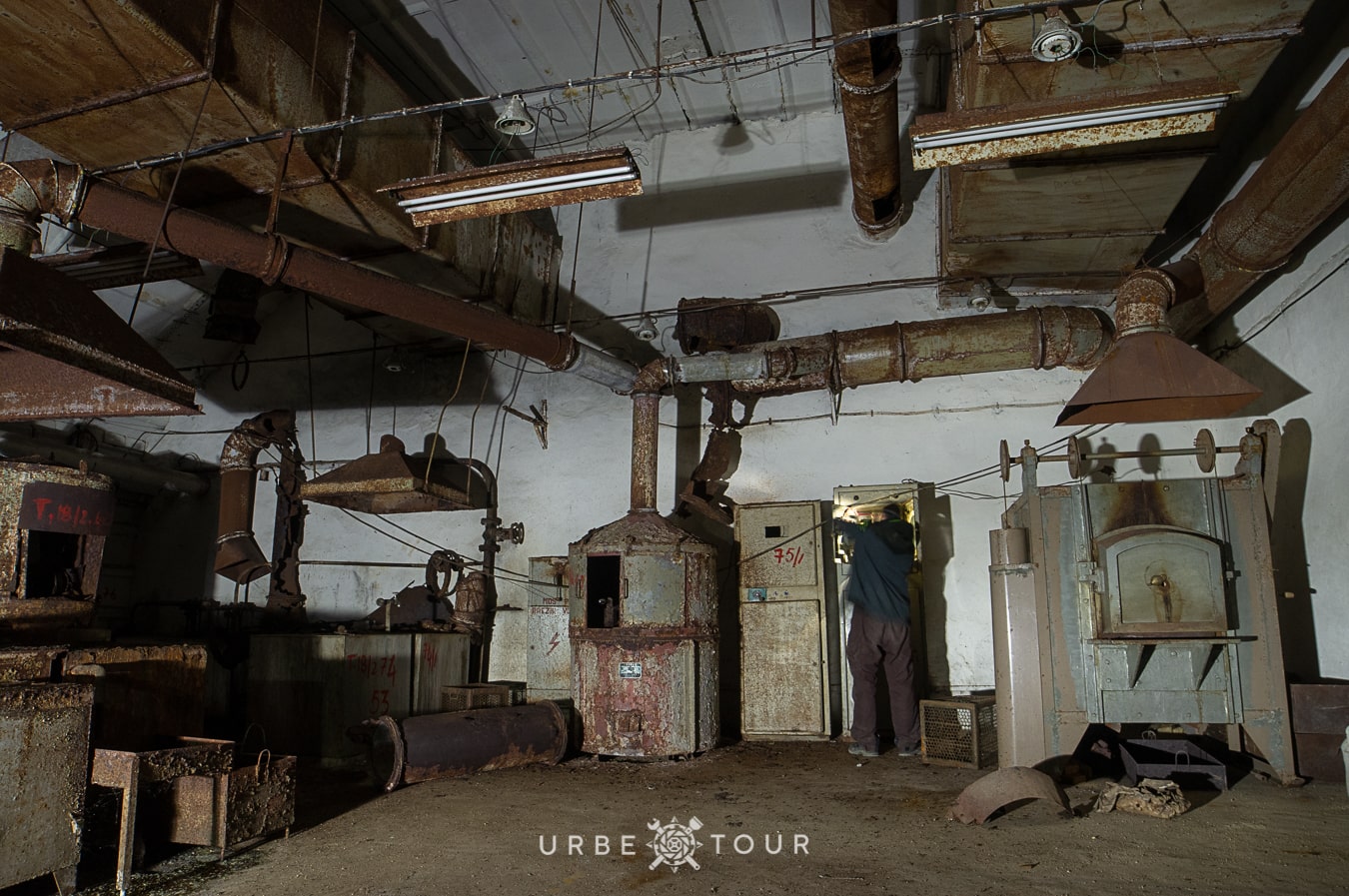 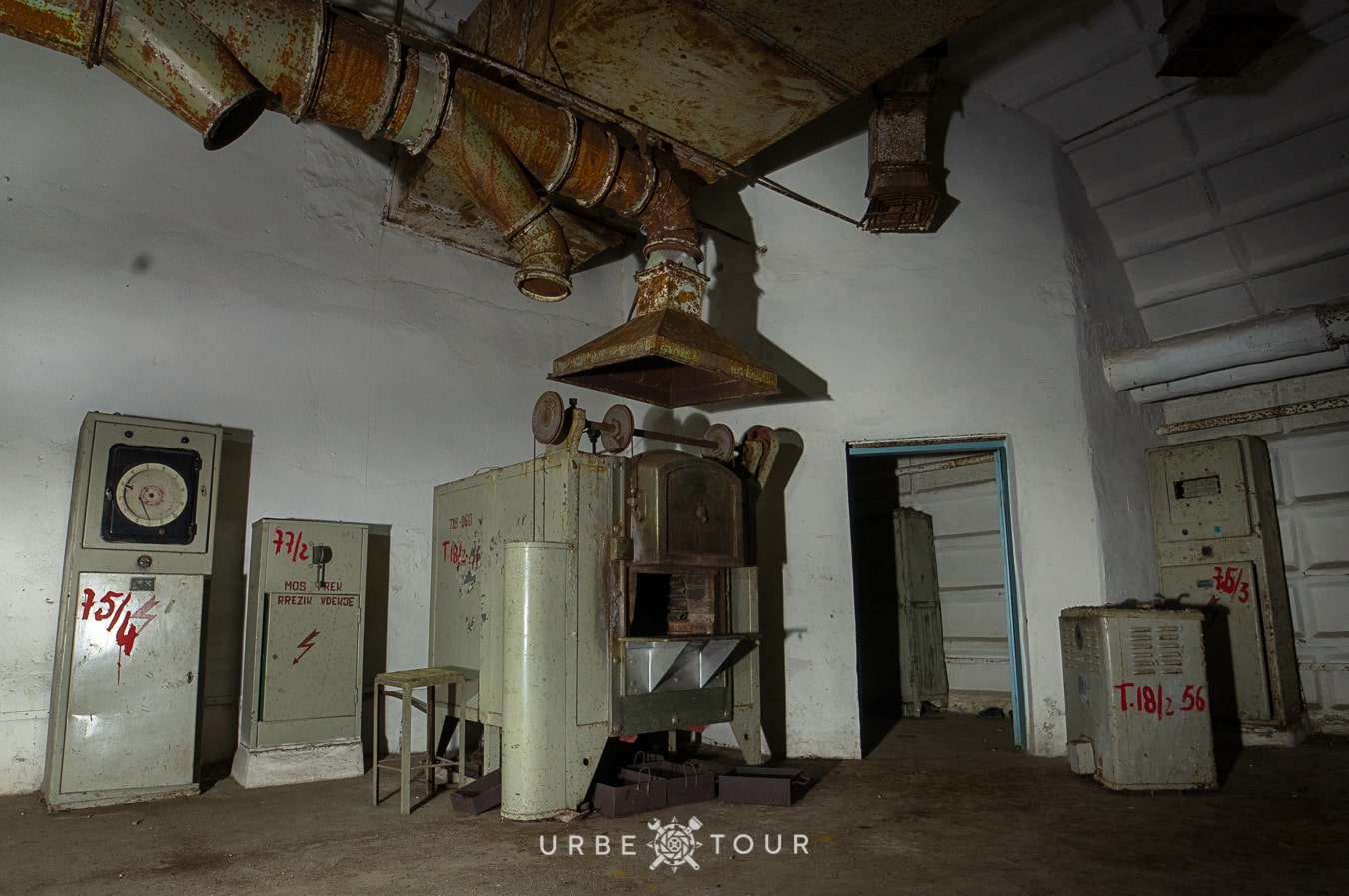 Immediately after the technical premises, endless tunnels go deep into the mountains; the height of the arches is designed for the passage of cargo vehicles here.

From only one fuzzy awareness of the scale of the detected object, the heart begins to beat more often, the beam of a powerful flashlight outlines the first hall, and surprise gives way to glee: this is a real underground plant! 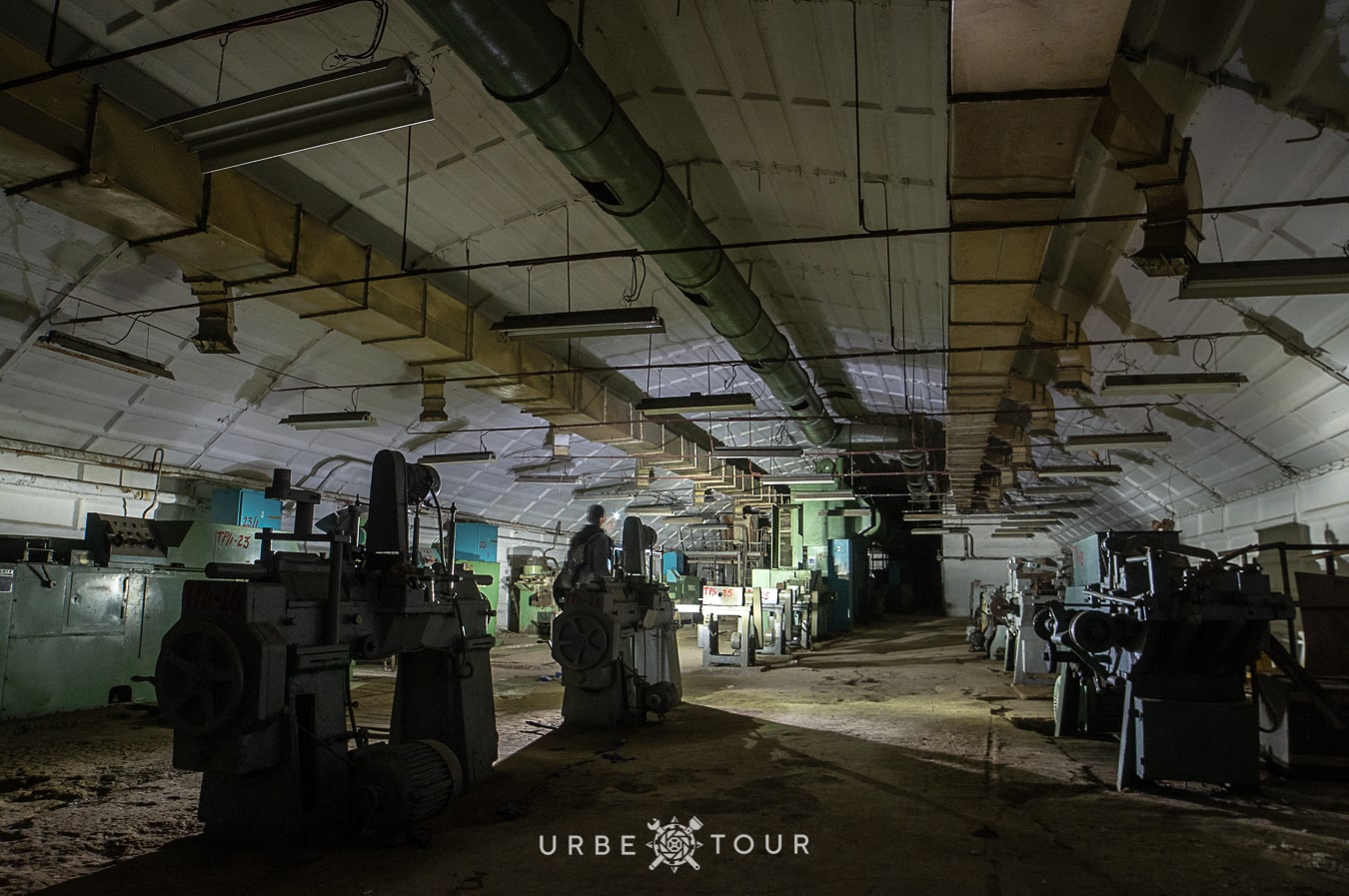 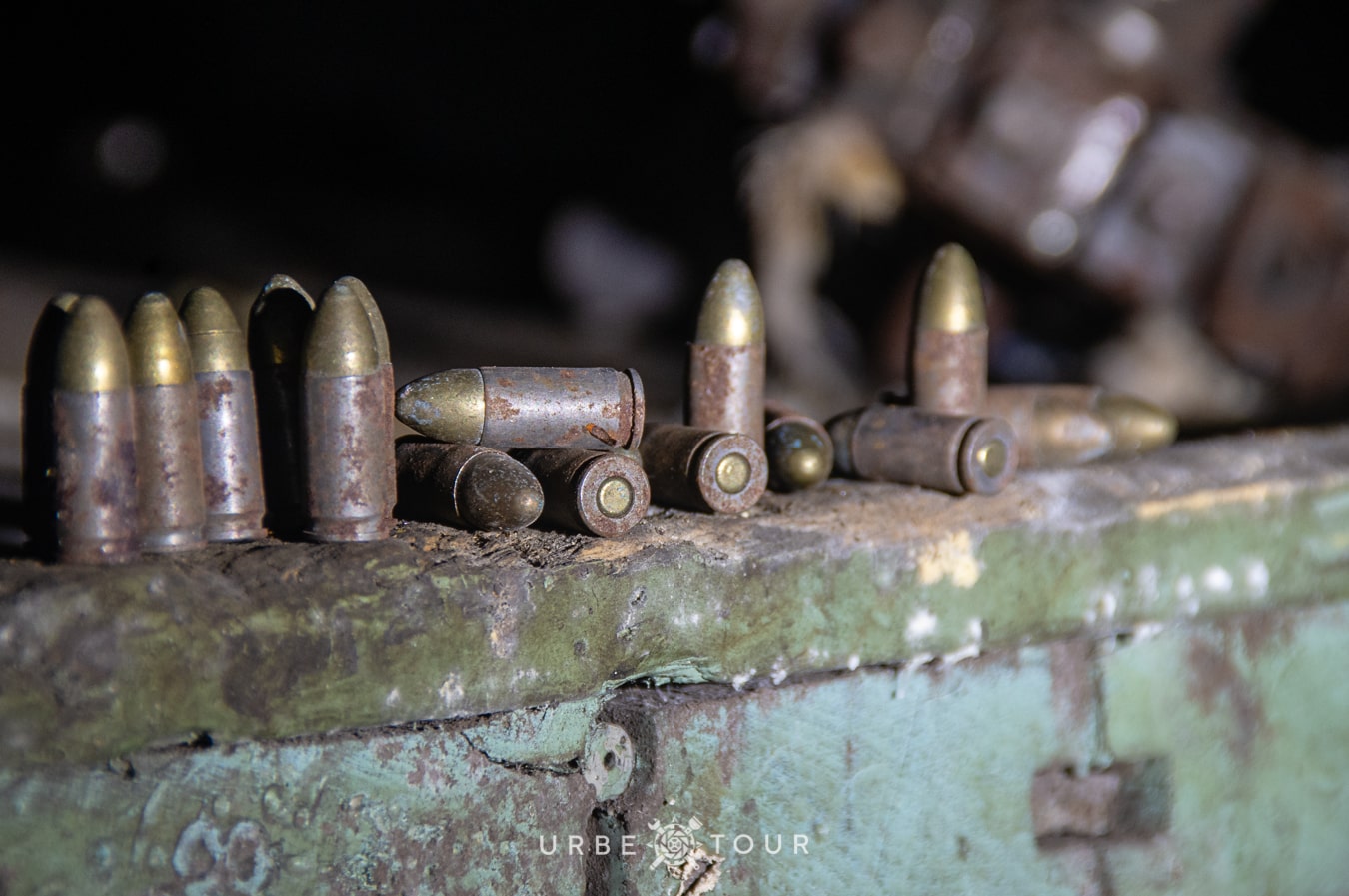 All production facilities of the above ground plant were completely duplicated underground. Chinese engineers and builders succeeded in erecting a complex of protected bunkers with a total area of ​​at least several hectares, where assembly lines and ammunition assemblies, explosive depots, packaging lines, machine shops, laboratories and administrative departments, life support systems, and even something like underground power plant were placed.

Structurally, the object is made in the form of arched blocks with a length of approximately 500 meters and a height of 10 meters, interconnected by tunnels. 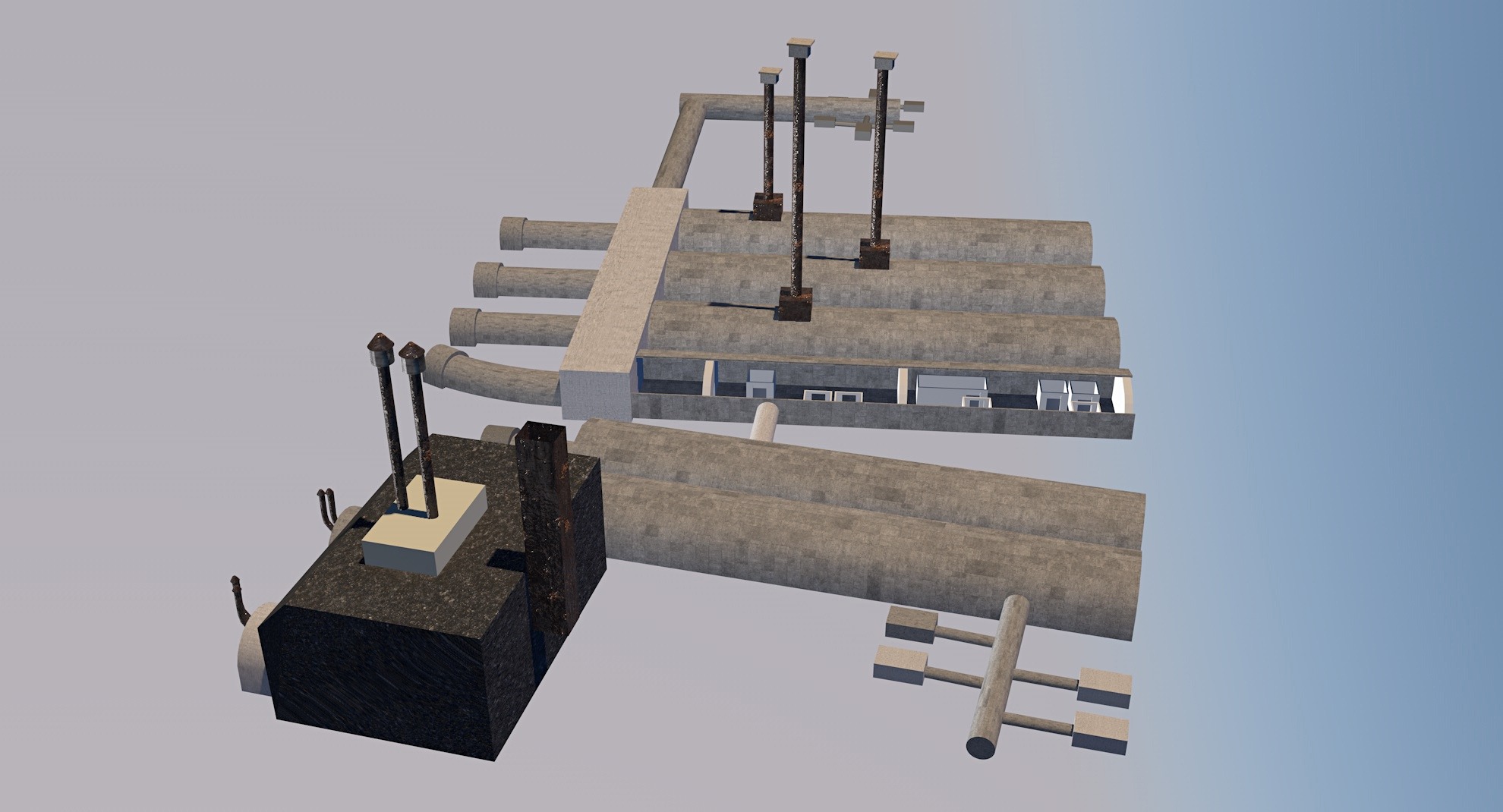 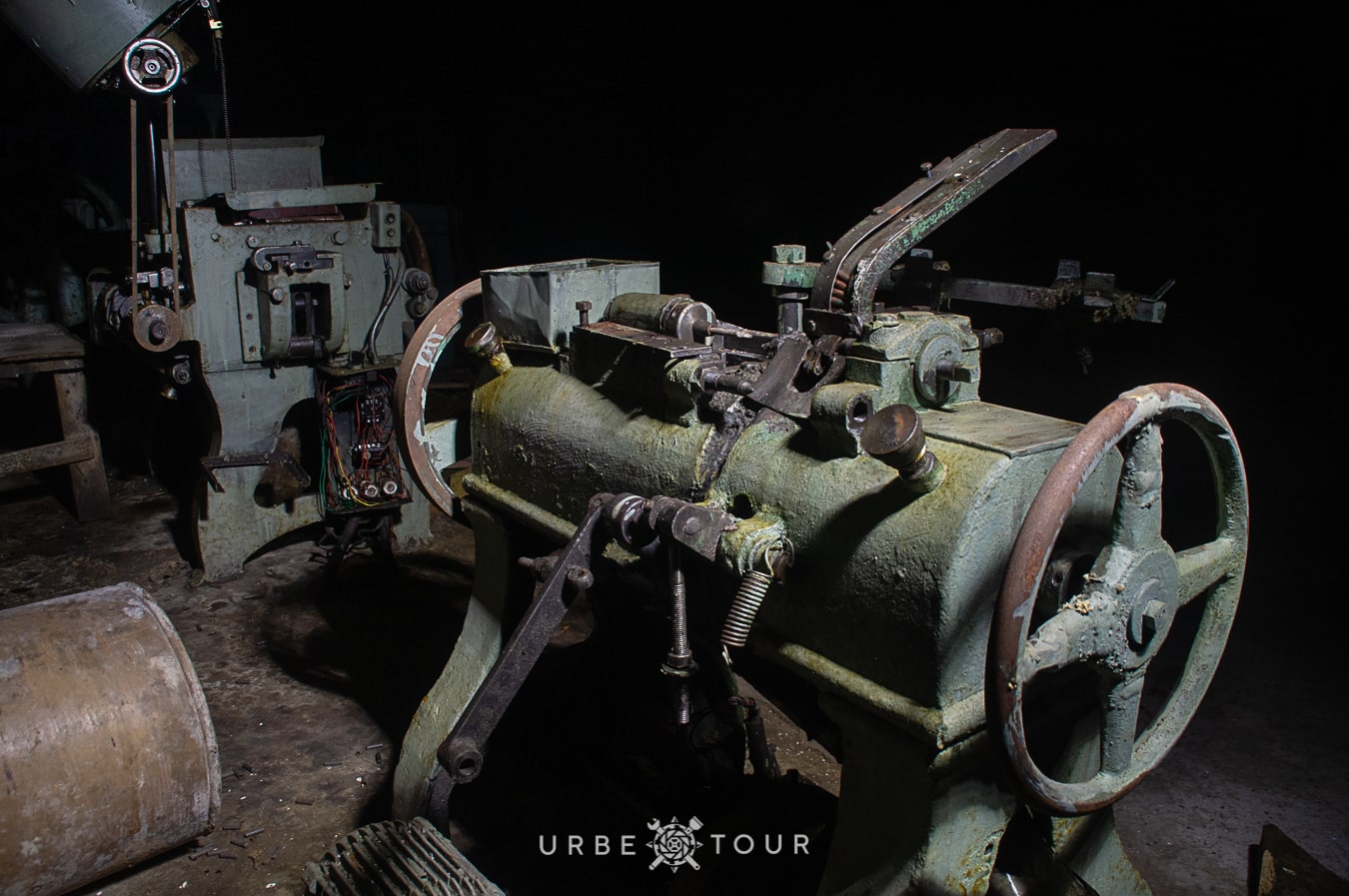 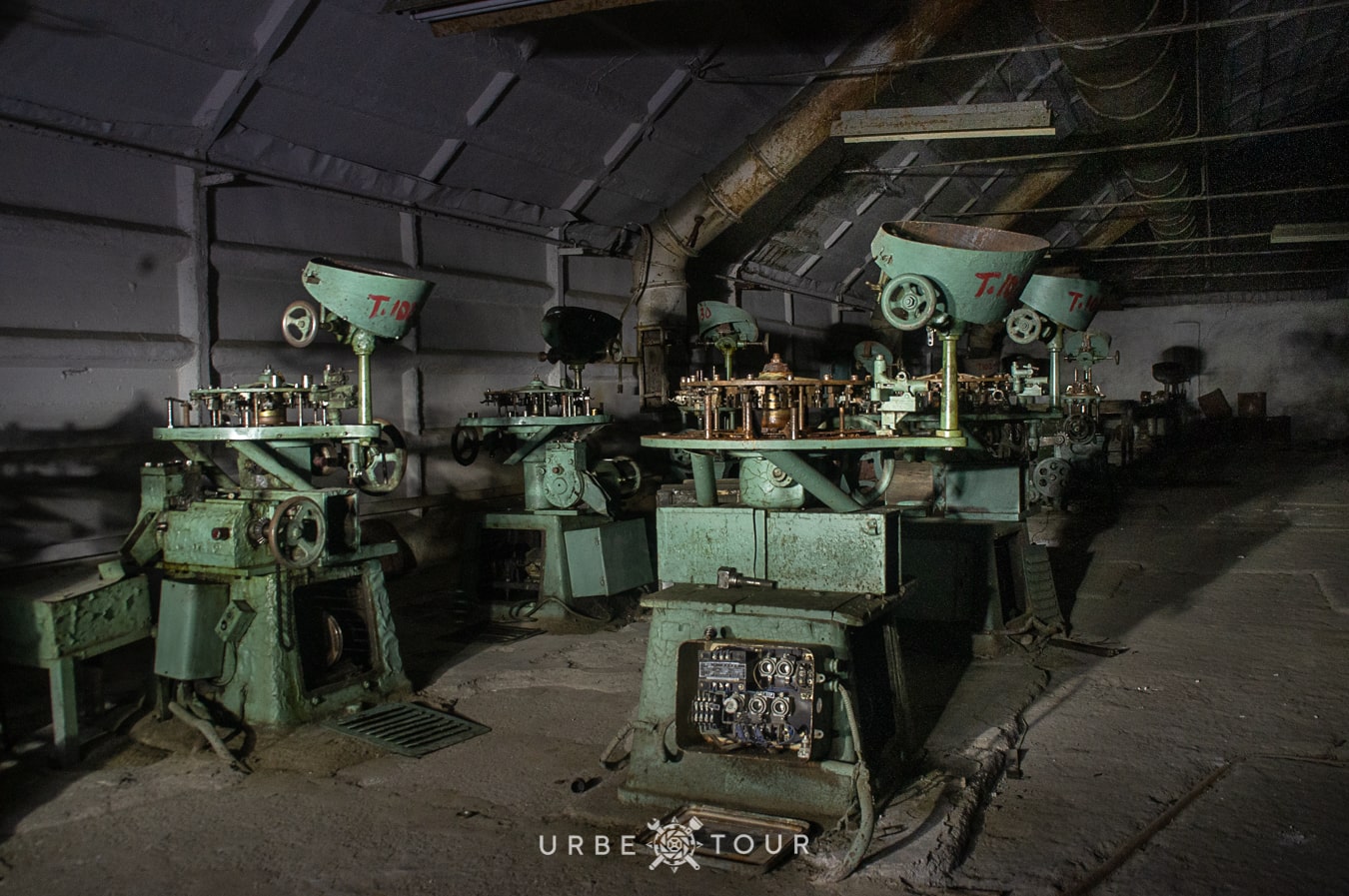 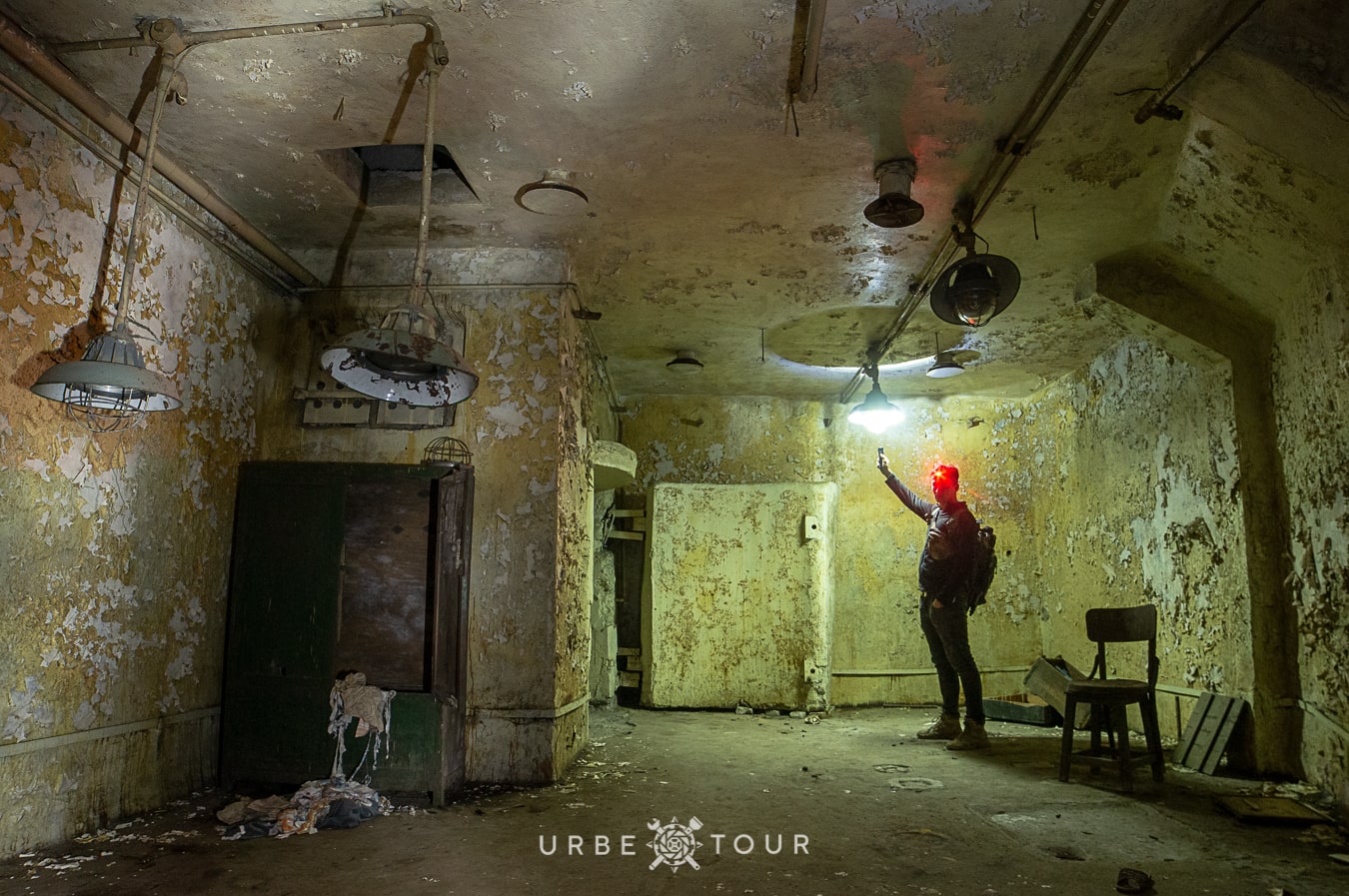 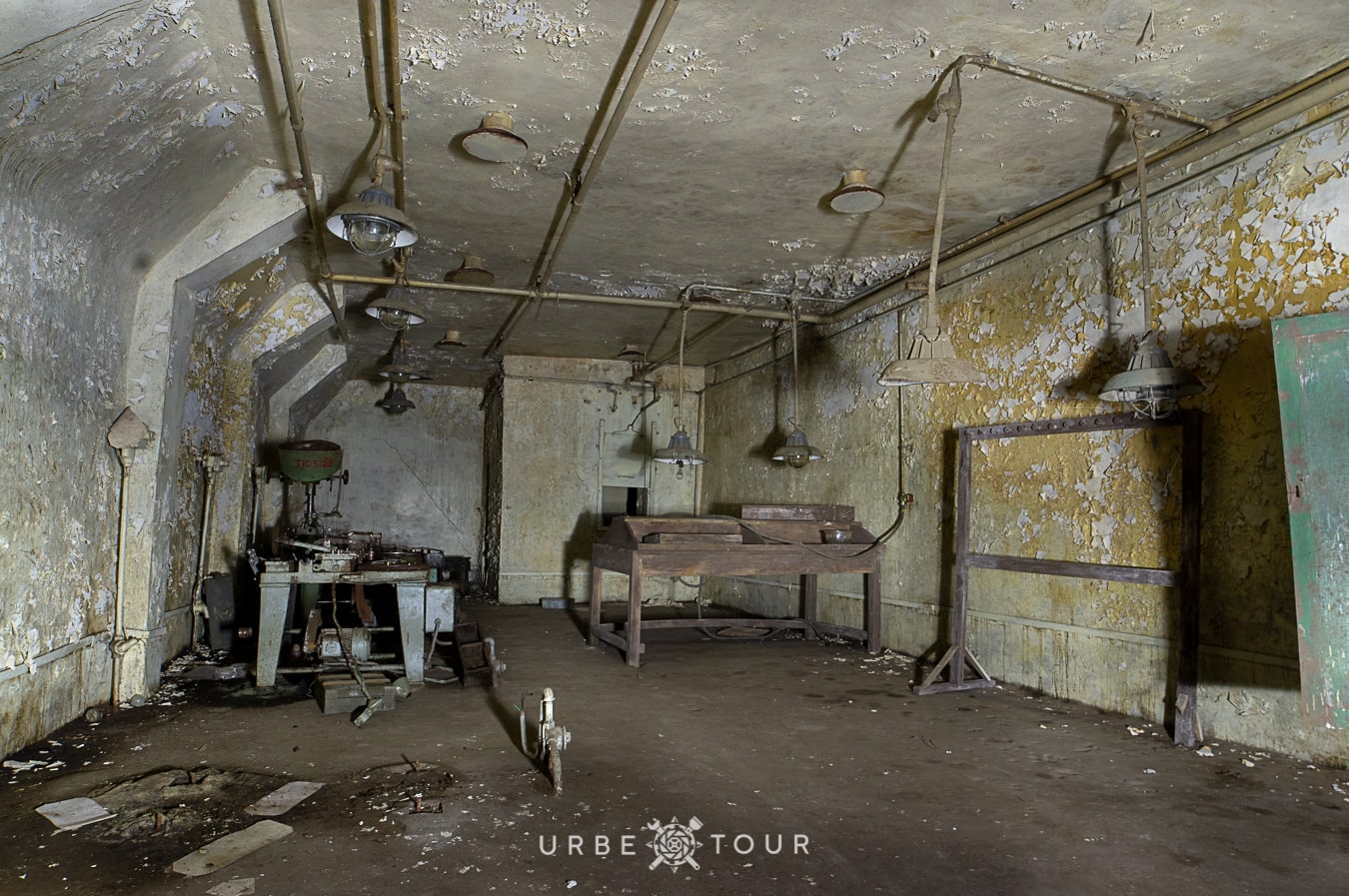 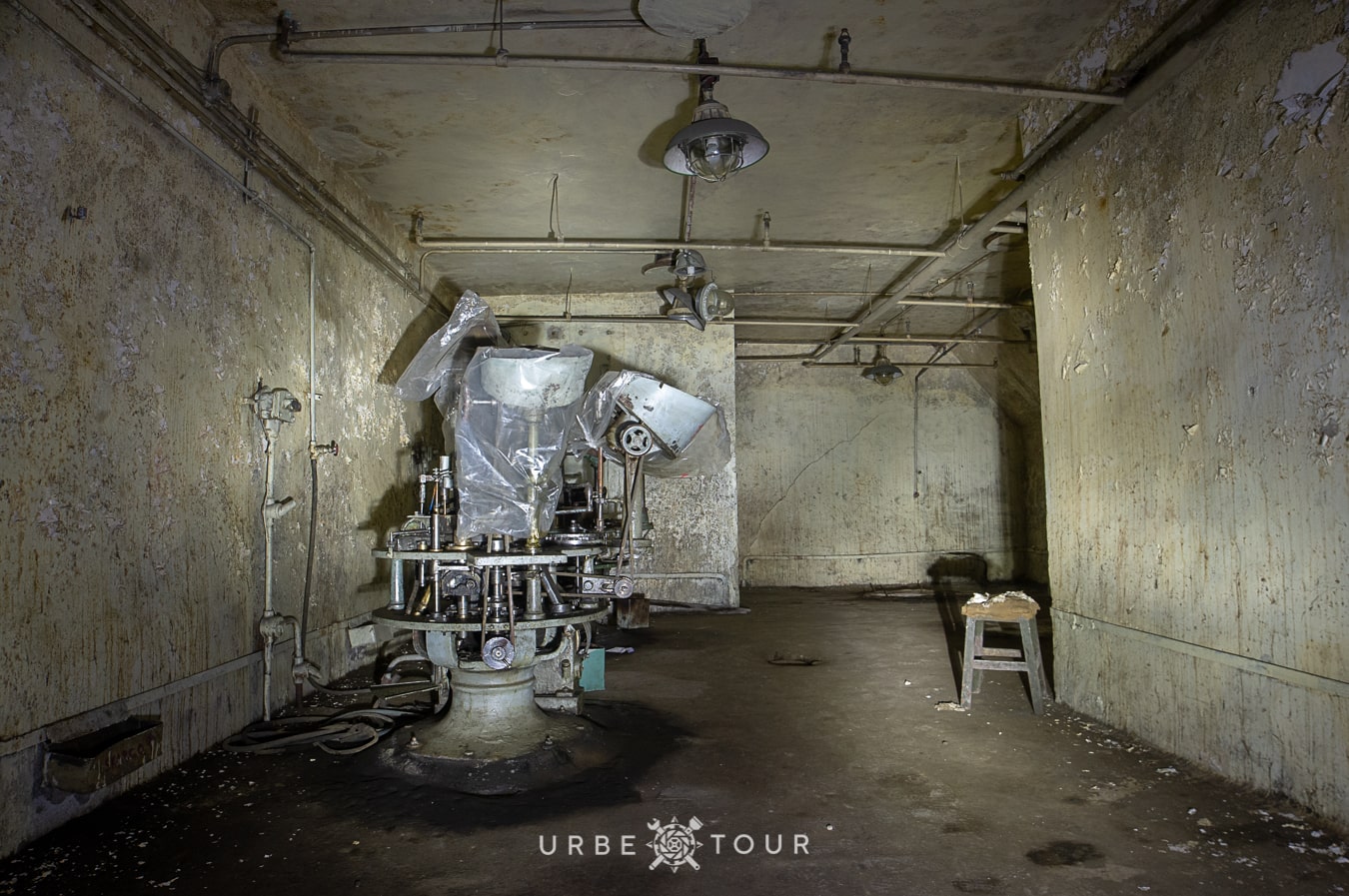 The first thing that catches the eye is a myriad of entire machines and abandoned equipment, almost untouched by marauders. Previously, I have repeatedly met reports of abandoned underground factories, but I have never seen references to such well-preserved objects of this type.

Every minute the research interest ignites with a new force, each new block surprises with filling of futuristic machines and mechanisms silently frozen under the bleached arched vaults. 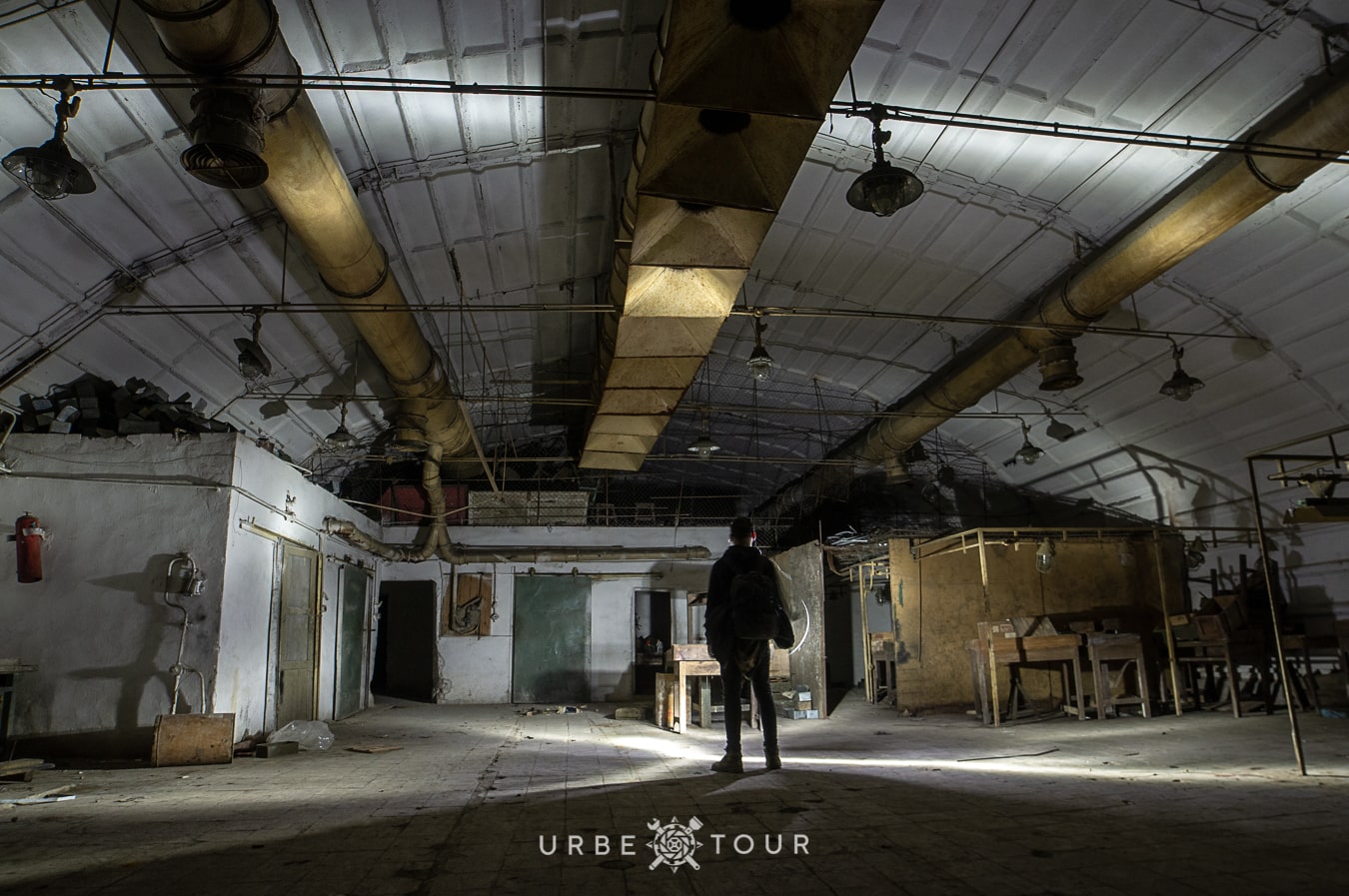 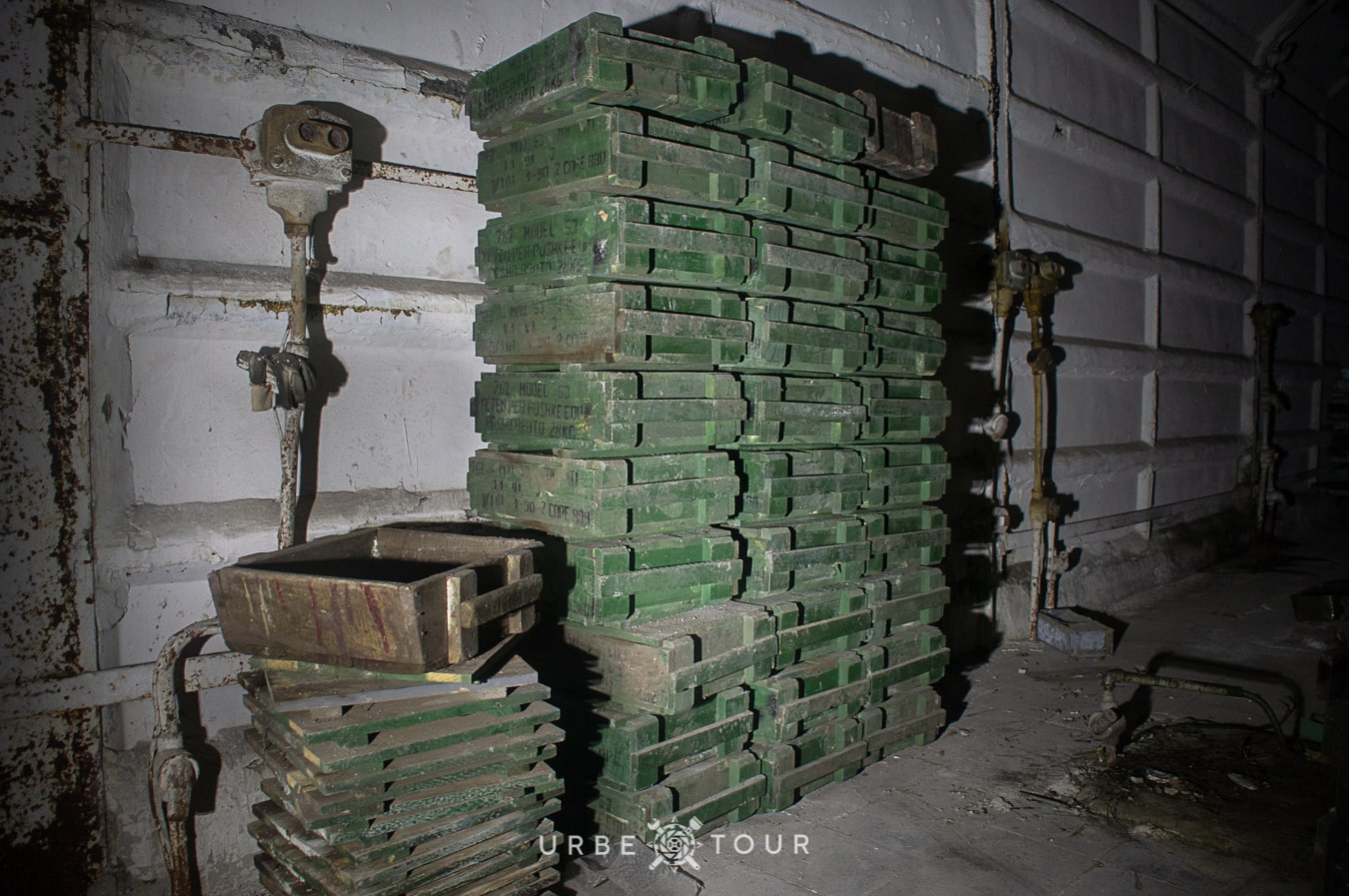 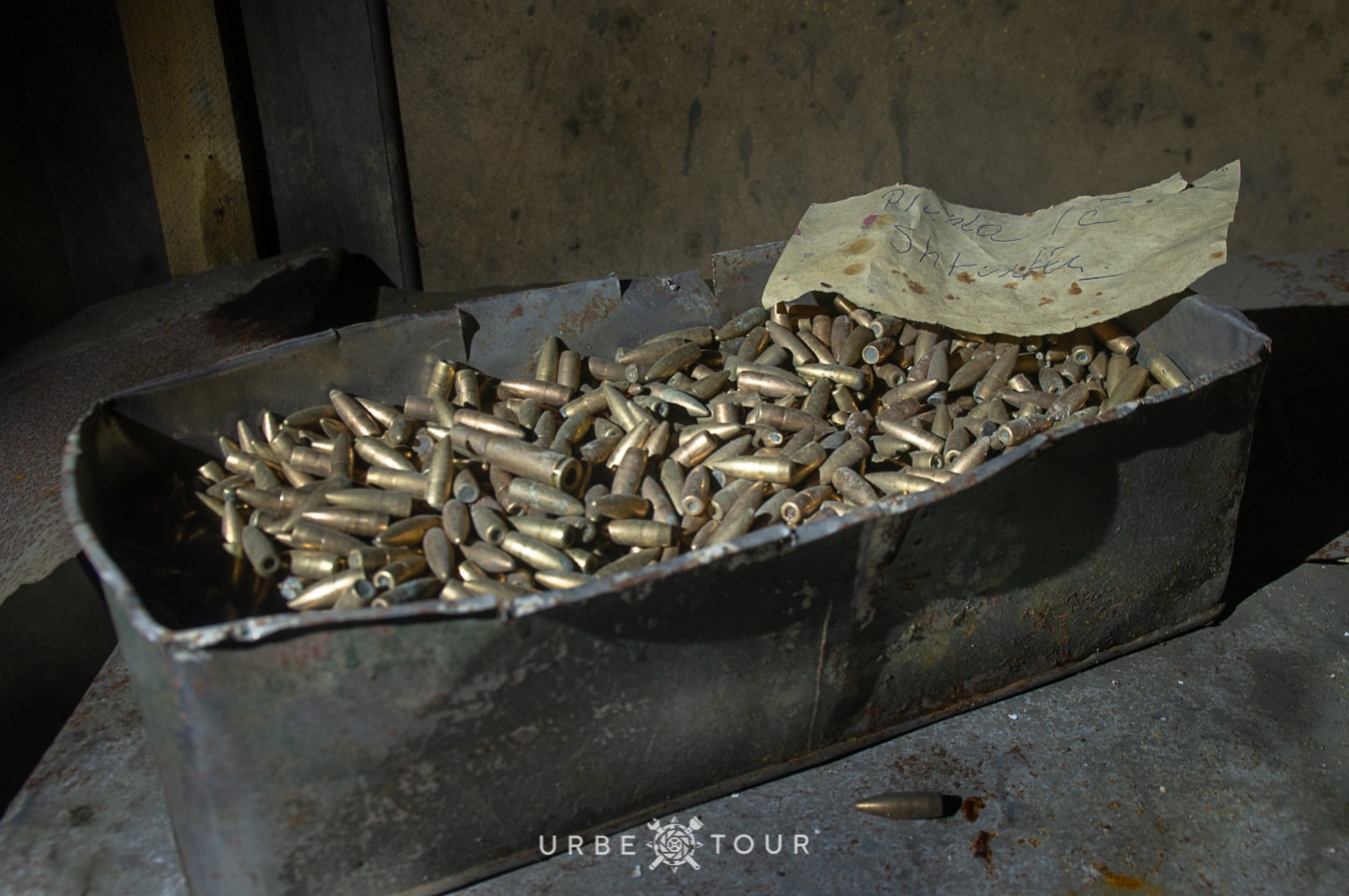 We continue our journey in tunnels and ornate galleries, trying not to miss interesting details. The ghost of a worker in a white boiler suit shows us the way, revealing the secrets of his underground possessions. In one of the shops automated line crimping sleeves is located. 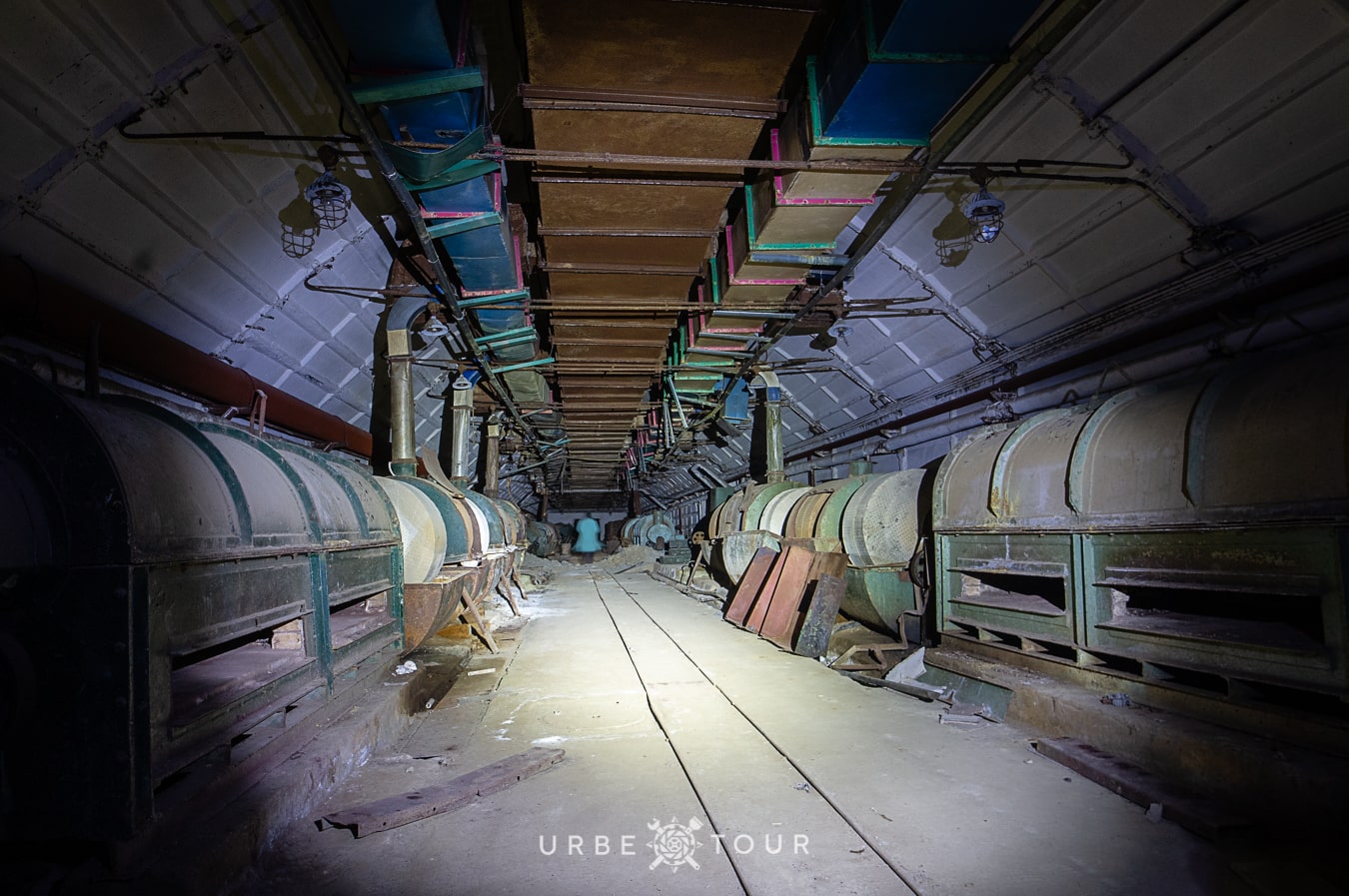 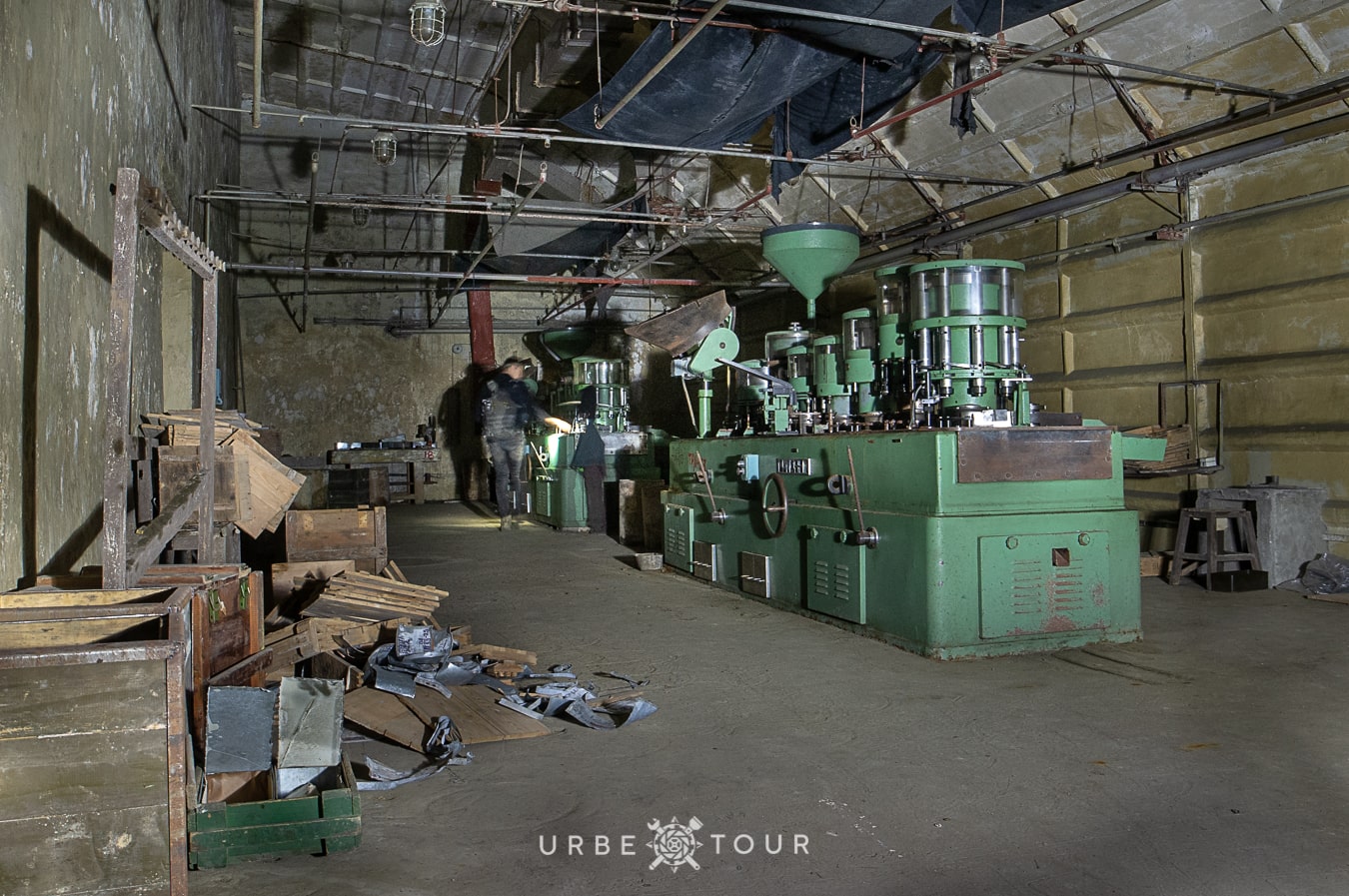 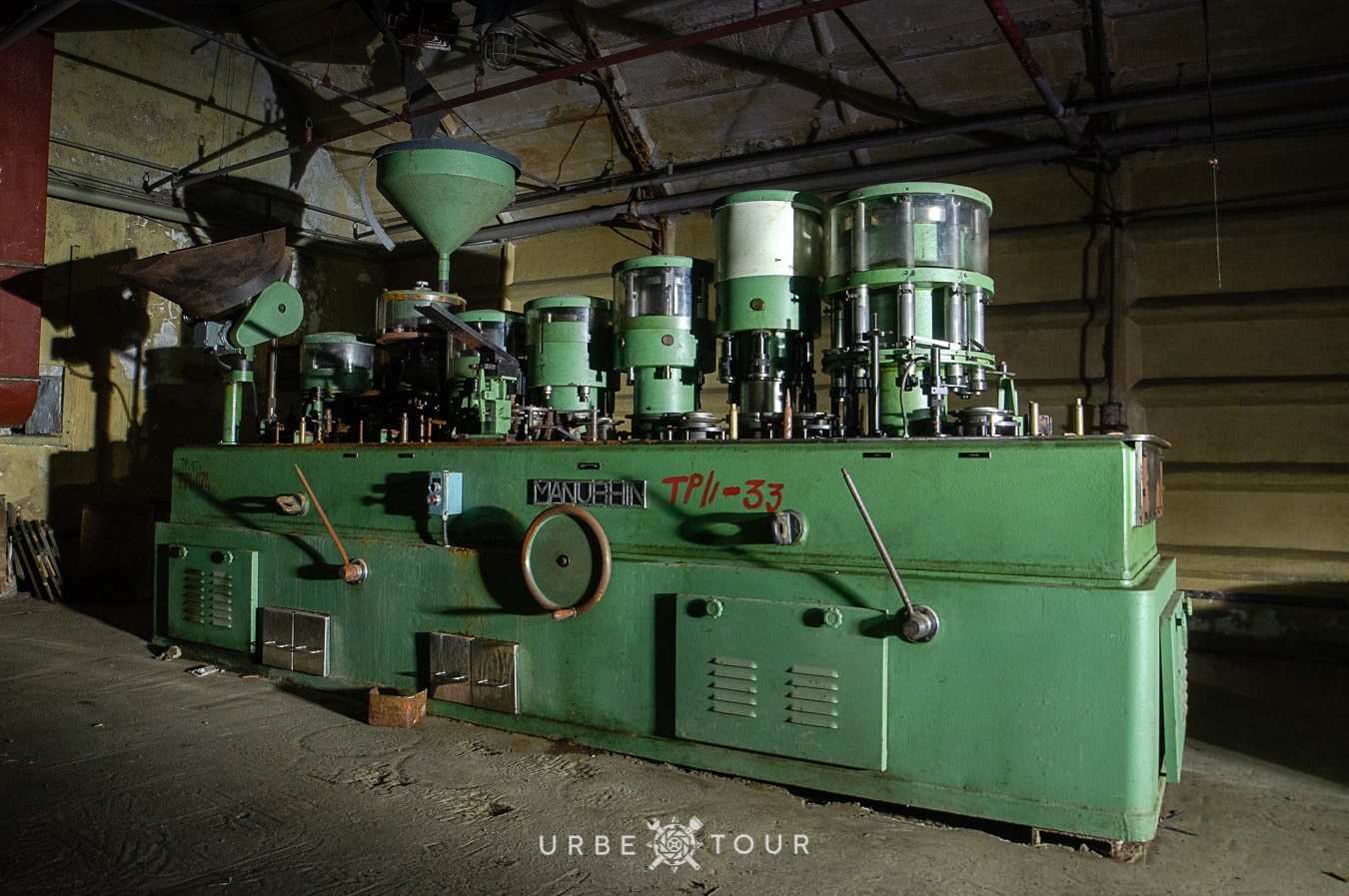 In complex mechanisms, one can see stuck cartridges. It seems that at one moment, right in the production process, all the cars were urgently stopped and people hurriedly left their jobs.

Now only darkness and deaf silence are reign here. It is hard to imagine working processes in these deserted workshops. It took two nights just to get around the whole plant and capture the key moments.

Unusual machines and tricky mechanisms do not give a chance look up from them, and inspire to detailed subject photography. 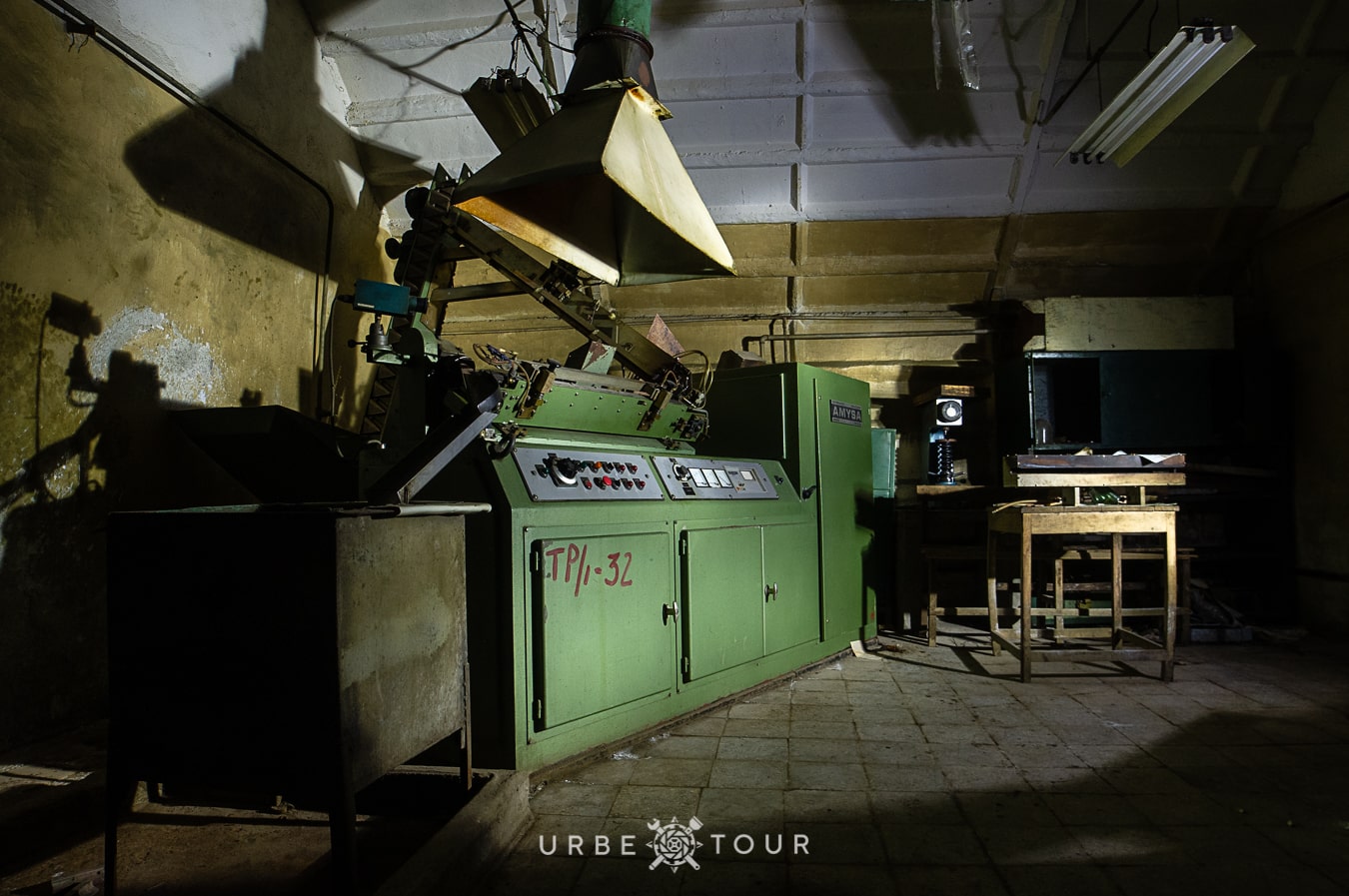 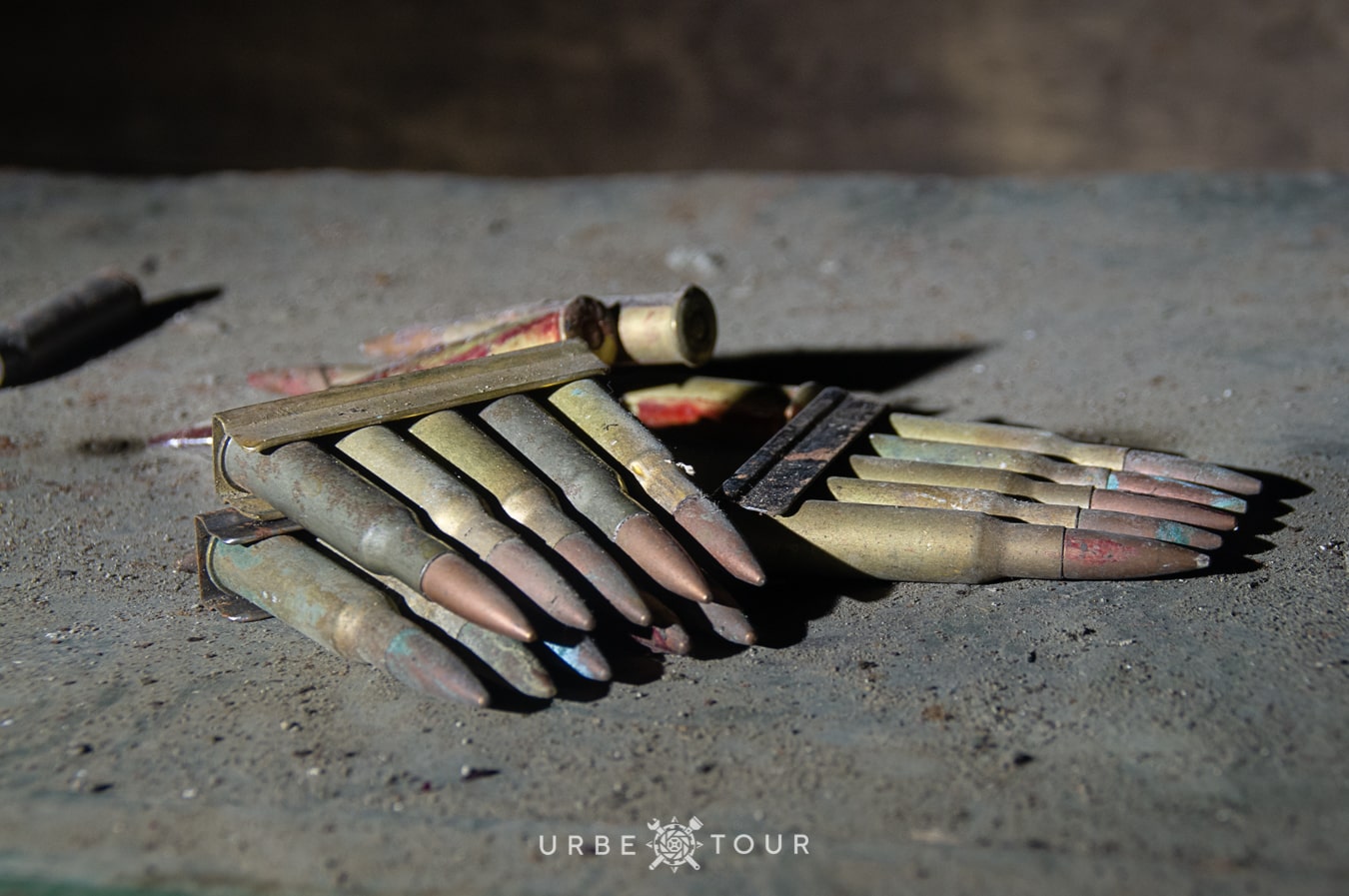 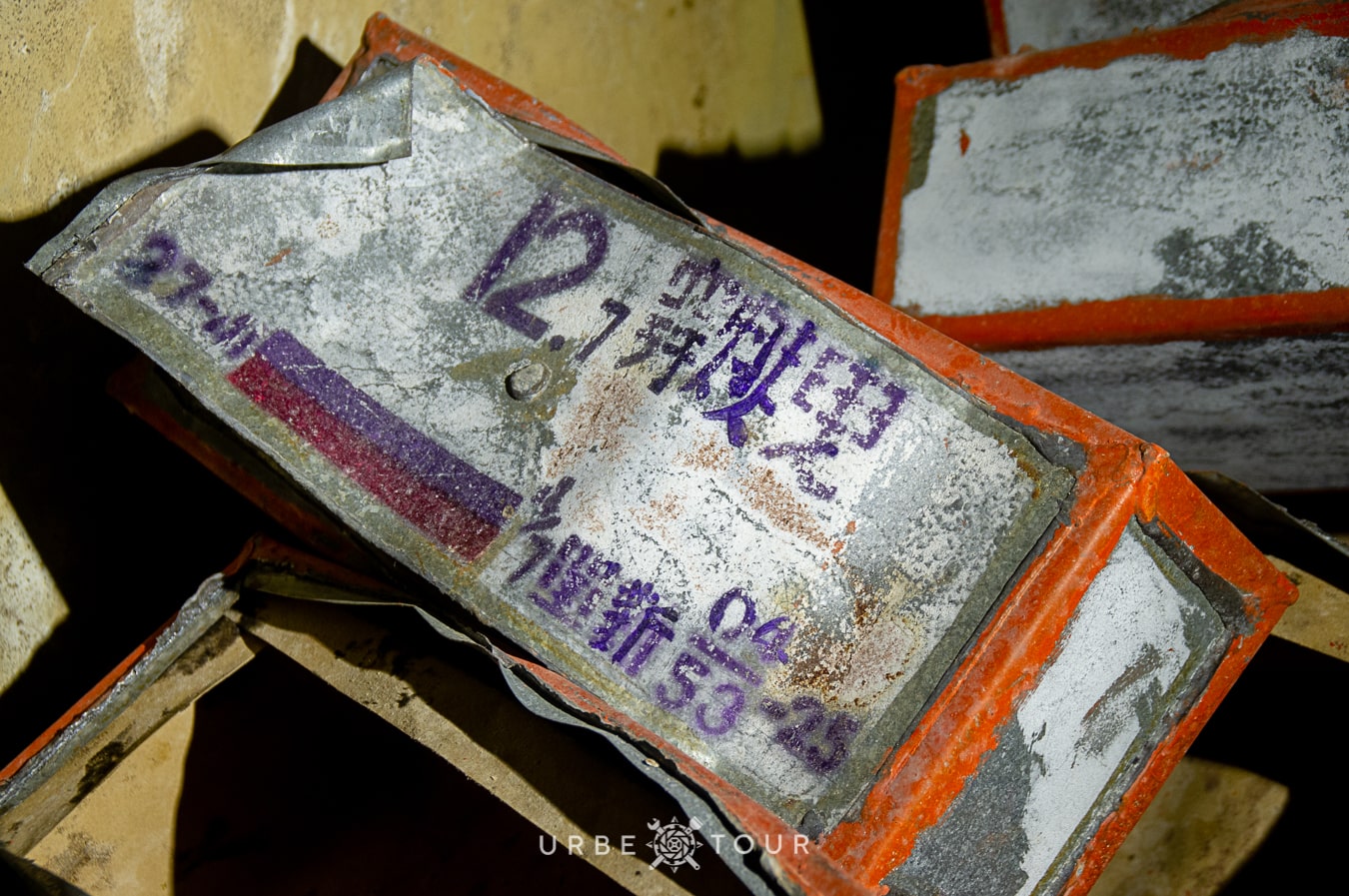 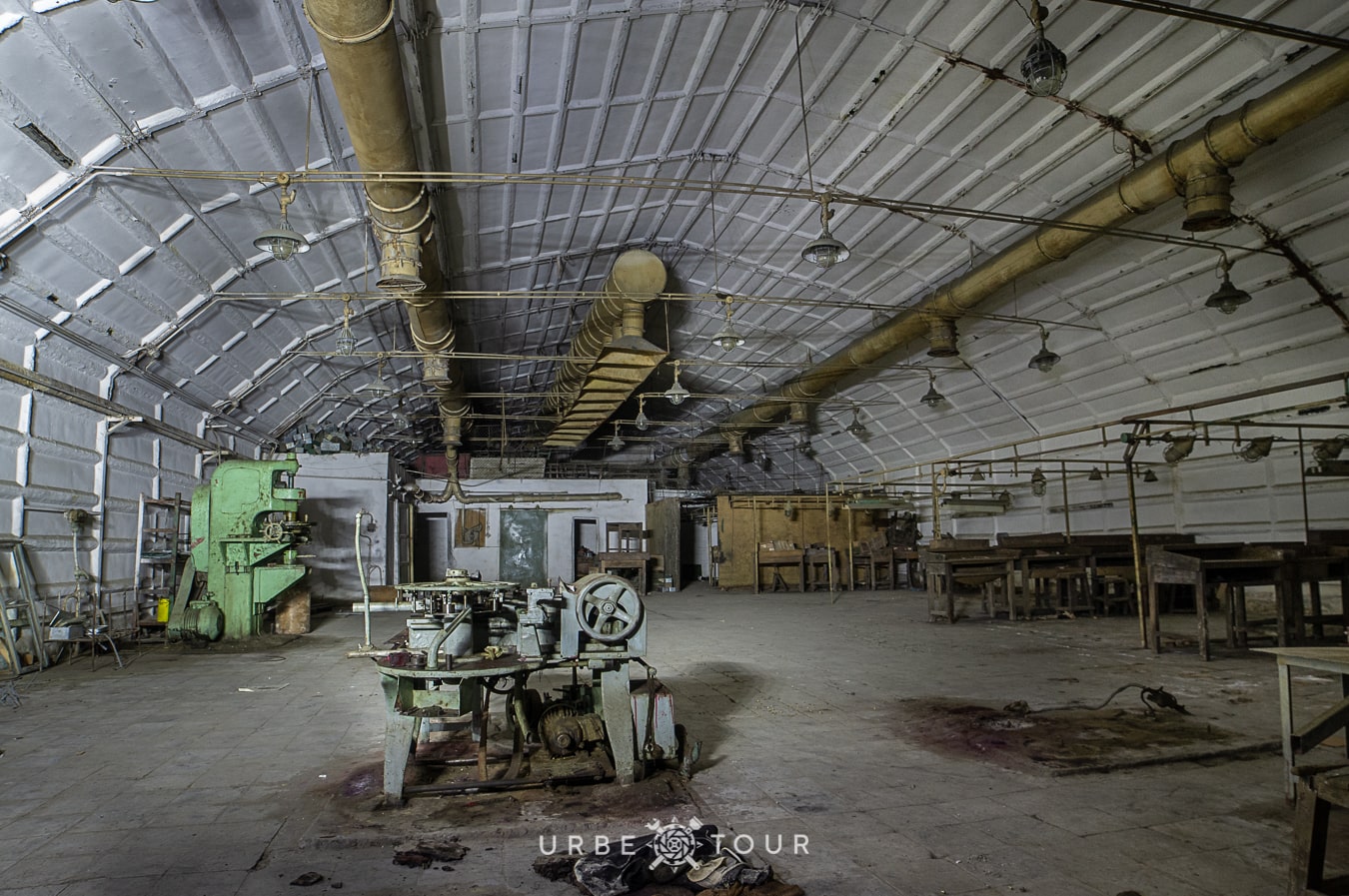 Most of the equipment is made in China, one can find hieroglyphs on nameplates. The most dangerous part of the production is separated by massive reinforced concrete closures.

Sifting, mixing, and hanging gunpowder, as well as equipping cartridges with it were placed here. To this day, abandoned barrels of gunpowder are stored here. The floor around the equipment’s aggregates tightened with film also covers a layer of black powder.

As it should be, there are various quality control laboratories, workshops, archives and utility rooms in the factory. 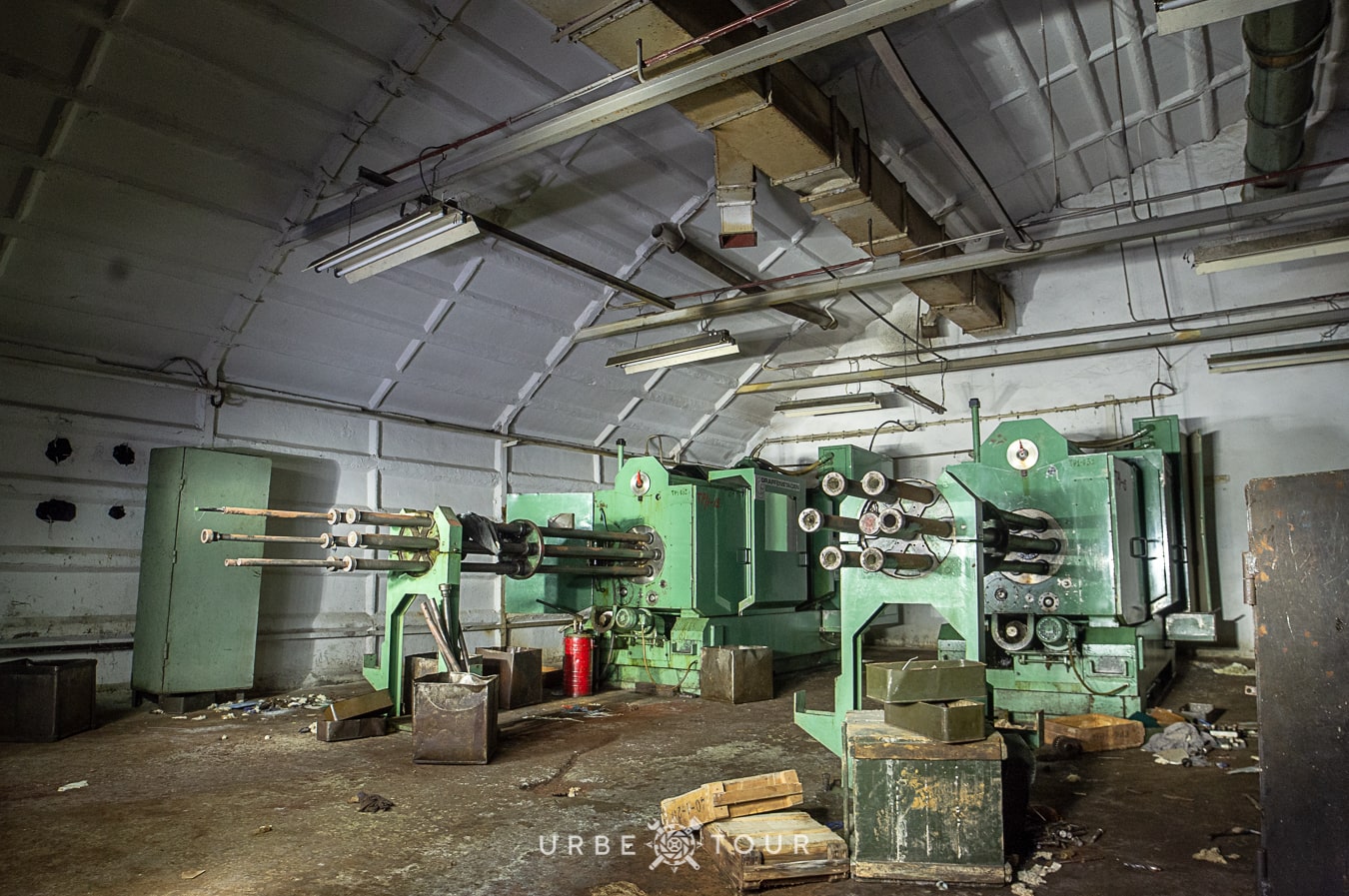 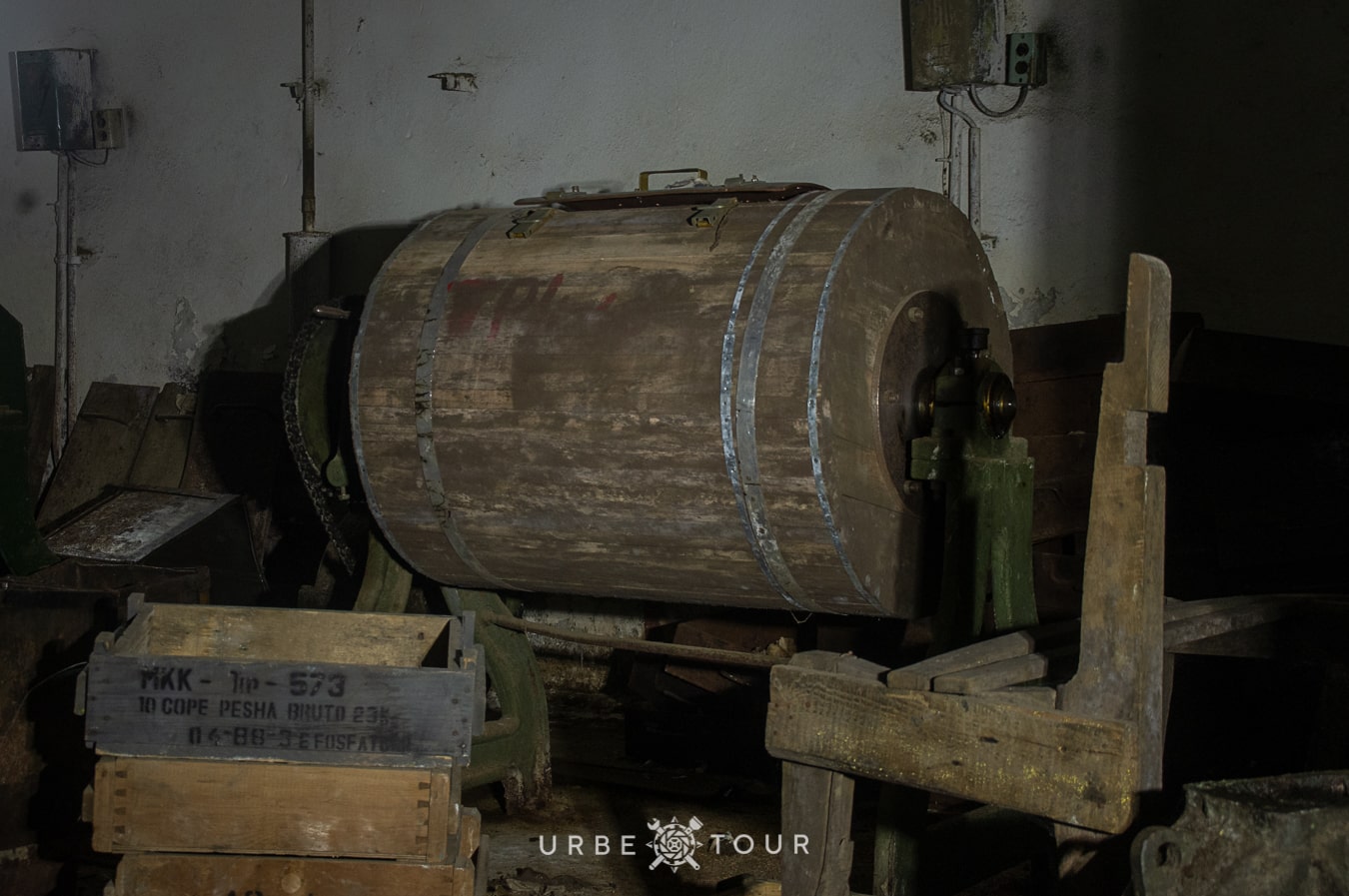 In one corner even a small diesel generator was found. In the meantime, the reserves of provisions and batteries were ending, having walked enough; we rushed to the ejection, taking a farewell glance at the endless underground spaces again plunging into oblivion. Then, finally, after hours spent underground above the head, the ocean of the starry sky of Albania again flickers. Tired but satisfied, we set off on our way to meet new adventures.