Under Kiev we have more than 80 underground rivers. Clean water powered by underground water sources flowing there when weather is fine, but when rain fall down on the streets water level in the tunnels growing up very fast and it’s can be dangerous for urban explorers. So we never visit this tunnels during hot season, only in wither when negative degrees on the streets. 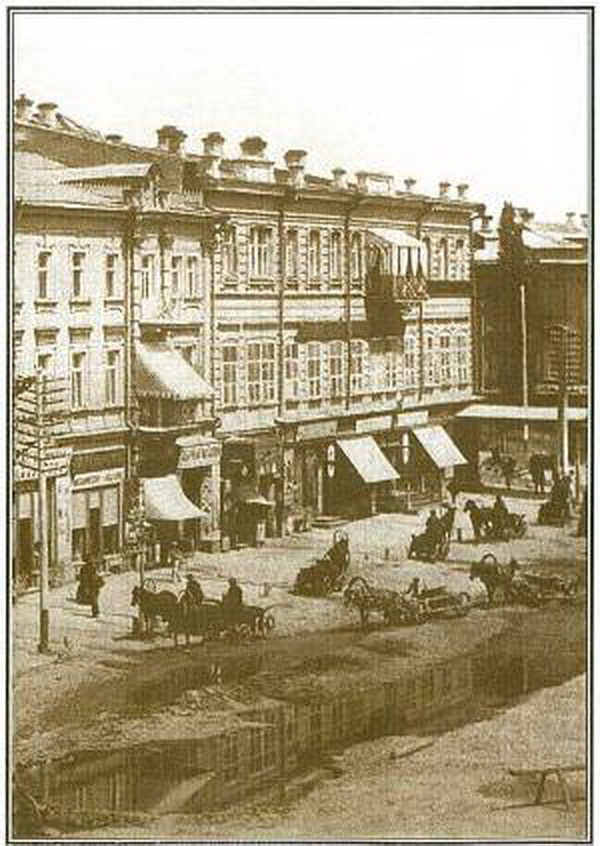 Unlike the European “mixed” sewerage system, where all types of water flow in the same tunnels under the city, in the end of the XIX century in Kiev engineers decided to divide domestic sewerage and storm drains. Also under kiev hills we have more than 53 kilometers of drain tunnels labyrinth but that if different story.

Kiev Underground Tour for those who want to disclosure all historical secrets!

The most beautiful and long river under Kiev streets has name Klov. Actually this tunnels system unites water-flowing of three river which were buried underground by grown up megapolis. The most interesting is historycal brick tunnels which was made in middle of XIX century by famous Ukrainian architector Vladyslav Gorodetsky project.

Walking through Kiev in the XIX century in a little remind us now the usual outlines of streets.
On Khreshchatyk, right in the middle of the street flowed a stream from the Goat Marsh in the area of ​​the modern Independence Square, and sources in the area of ​​the European Square. The problems began during heavy rains. From the neighboring hills the stream filled with water and spilled heavily at home, in some sources it is also mentioned that “people and horses were drowning on Khreshchatyk.” 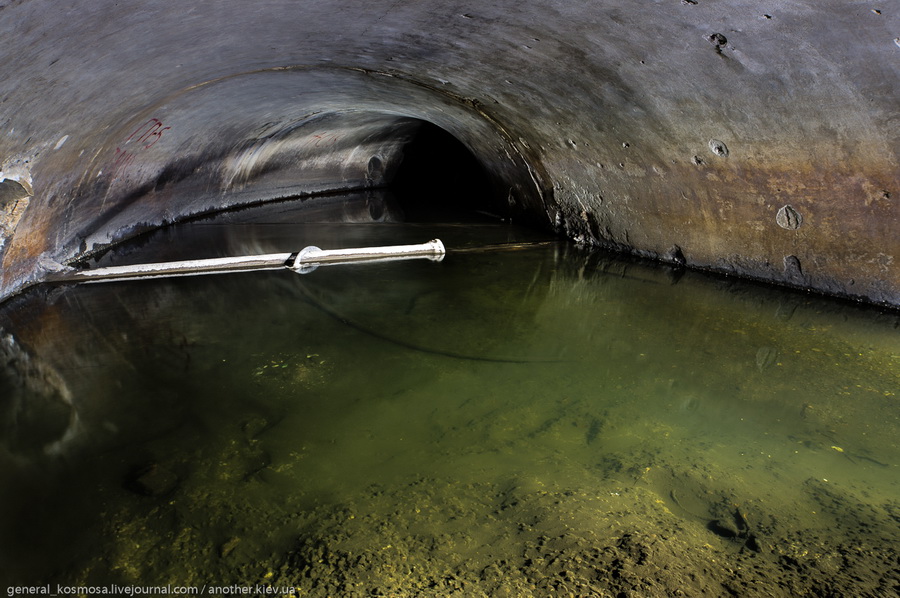 Klov is technical name of Prozorovsky tunnel system which unites three underground rivers: the Klov, the Khreshchatyk stream and Klovitsa. The origins of Klov stream under Arsenal plant, Khreshchatyk on the Independence Square and Klovitsa from the Presidential Administration.

So let’s start our underground trim through tunnel system from flooded area at the entrance. It was formed here due to the rearrangement of the entrance. 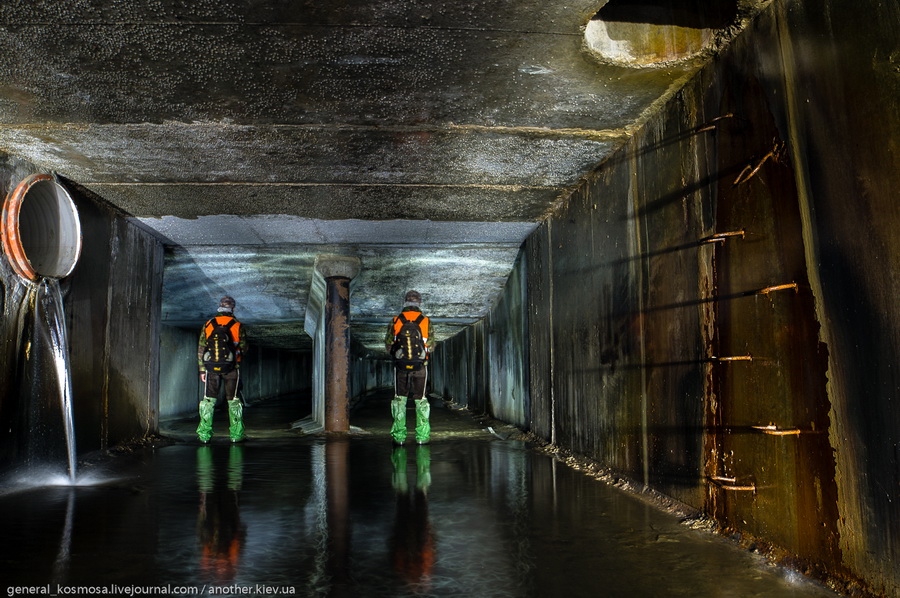 The name comes from the word “Klov”, which means “water”, “moisture”. In ancient times here flowed the Klovski stream, which flowed into the river Lybid. The Klov River still passes through the city center, but is underground in the reservoir.

In some places the tunnel bifurcates by this way builders have reduced ground presure on the arch, thereby strengthening the underground highway. Two people are not photoshop but shot in one frame 🙂

The junction of the old and the new tunnel, a plastic pipe with a diameter of 1.5 meters leaves in the direction of the NSC Olimpiyskiy. Previously, you could get out of one of the hatches in the stadium and not pay for a ticket to a football match 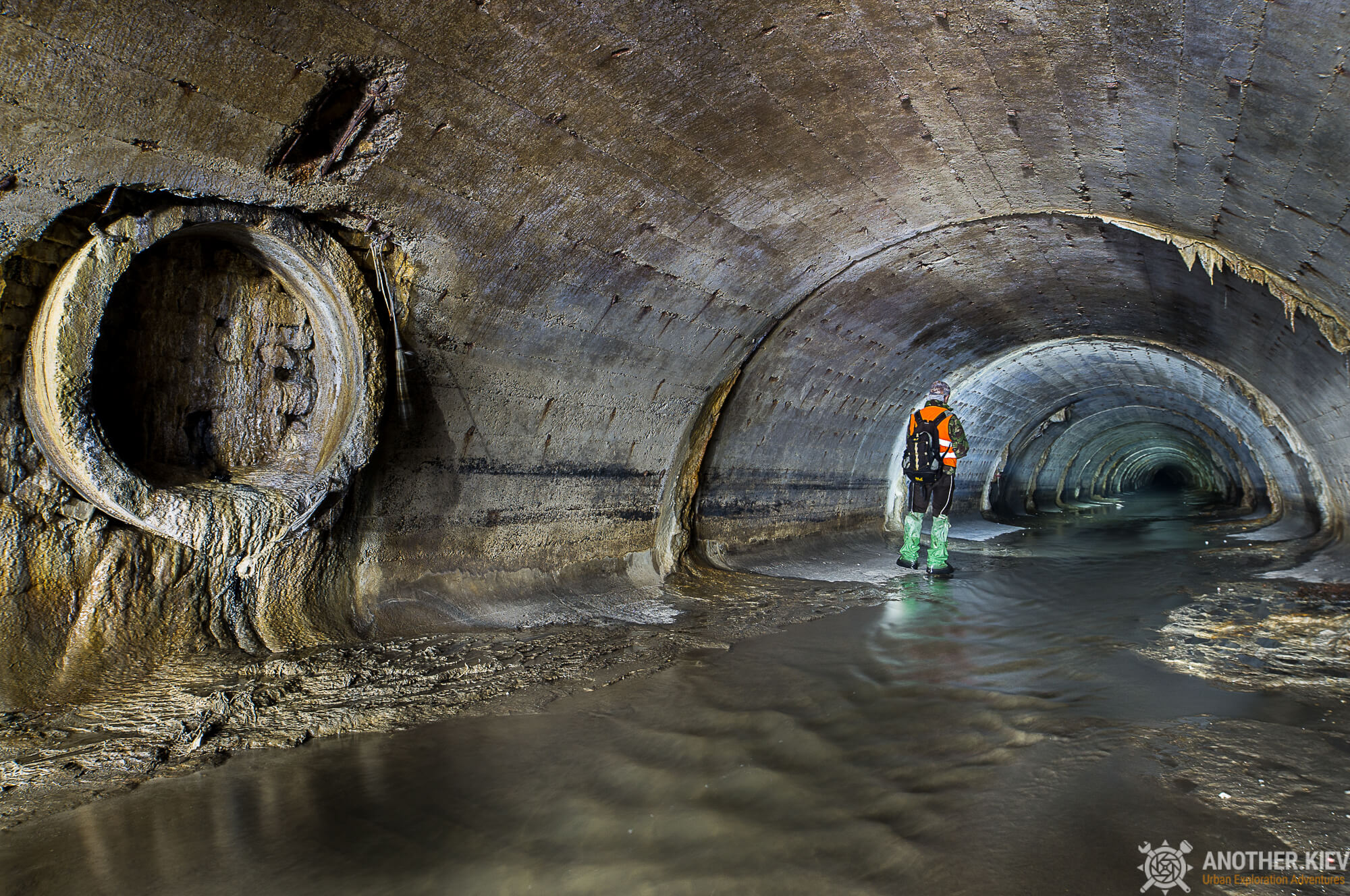 On both sides of the underground river, beautiful streams were formed, similar to those found in natural caves. Sometimes stone stalactites hang from the ceiling. 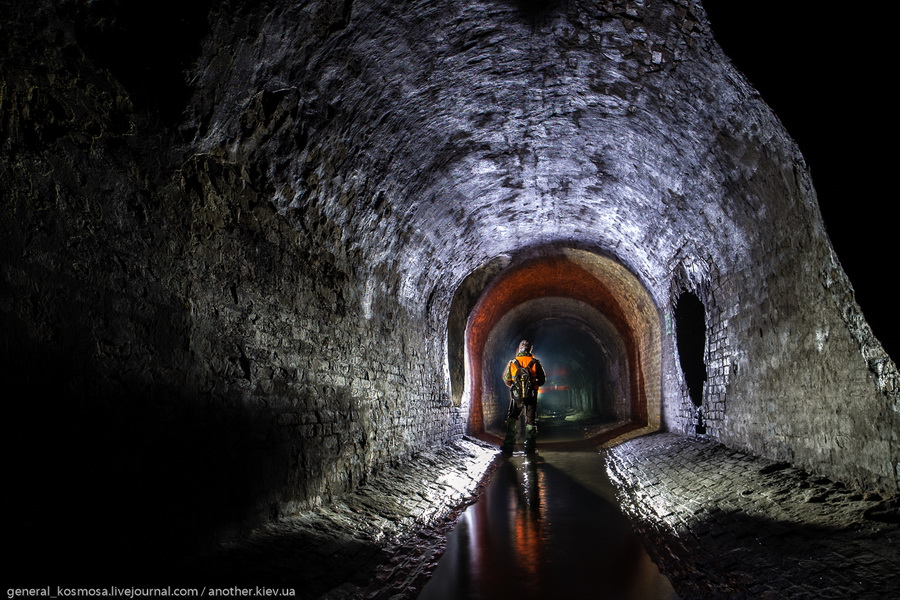 The historic section of the tunnel is made of brick under Khreshchatyk, one of the most remarkable places in the underground Kyiv. It was built in the 1880s. 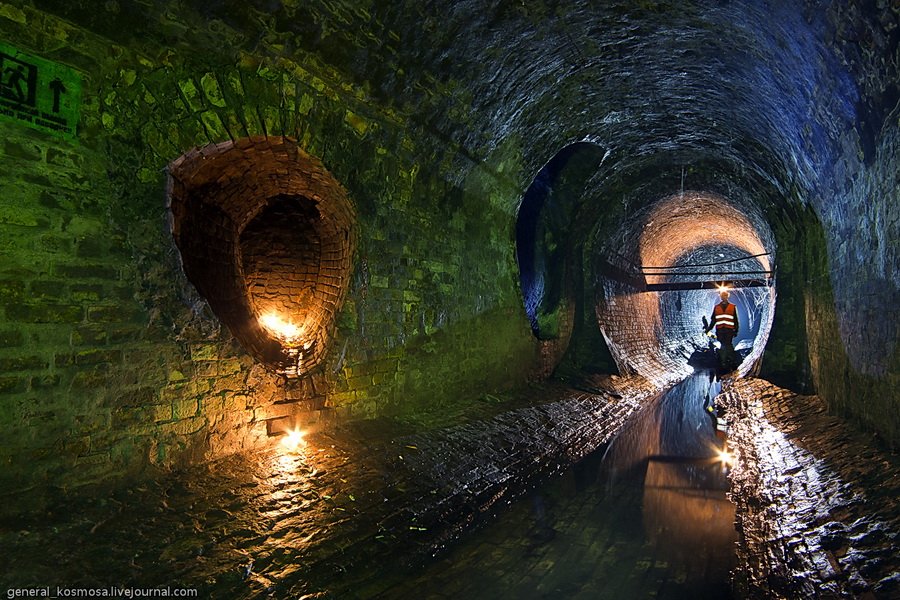 The historic section of the tunnel was built in the 1880s.

This place is more like some kind of underground in London. Some tunnels lead to the grilles for rain and every day townspeople walking and see it under their feet on Khreshchatyk. 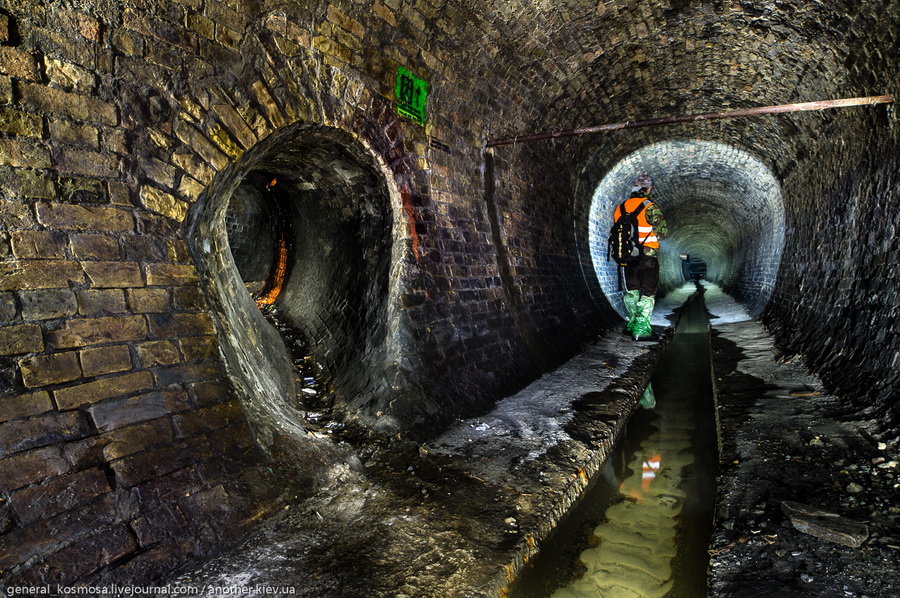 On this section of tunnel the floor is completely paved with cobblestone in the same way as Andrew’s descent used to be. 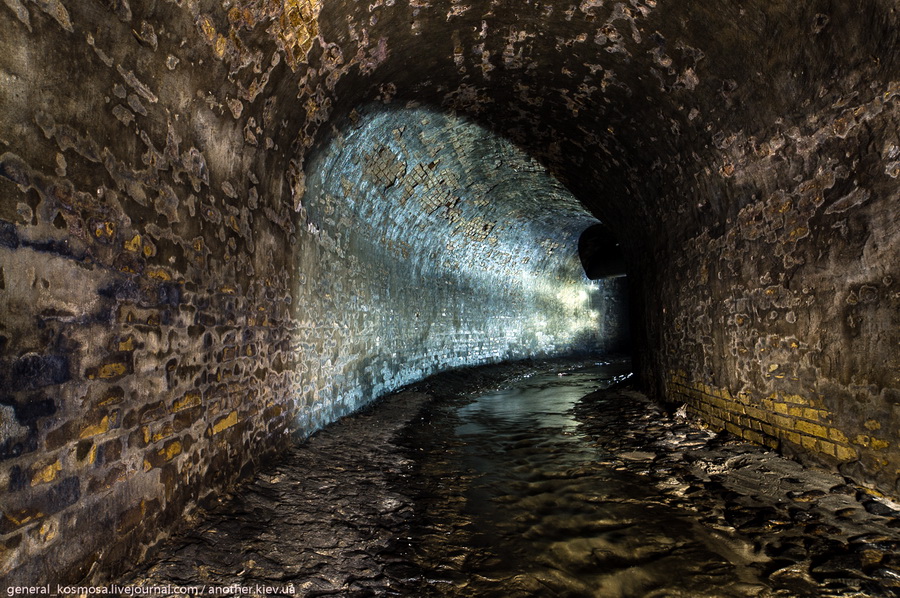 In some places time did not spare a sound old masonry and the water literally destroyed the old brick floor of the tunnel. In 2015, the accident in this place has scored monstrous proportions and the tunnel arch threatened to collapse. But workers of Kievavtodor departament repaired section of the tunnel.

Greenhouse grasshopper (Tachycines asynamorus) – a small insect native to Central China, caught in plants in Europe and America. He settled mainly in greenhouses and greenhouses, from where he got his name. Grasshoppers belong to a class of insects, rows of orthopterans, a family of grasshoppers. 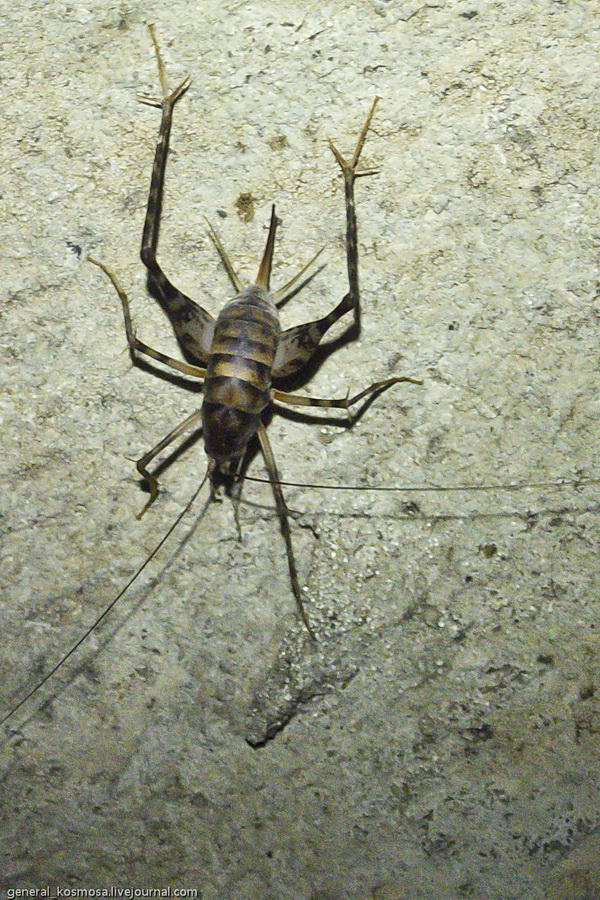 In Klove you can find small valuable items that people have lost from their pockets on the streets over the past 150 years. Coins, bullets, crosses, badges, medals, stripes.

The oldest coin I’ve ever found in underground rivers was 1/4 kopeika 1861.

You can visit underground river Klov during cold season, jst contact us from Unrerground River Klov Tour page.
WARNING! Visiting underground rivers without experience can be extremely dangerous don’t try to do it by your own!